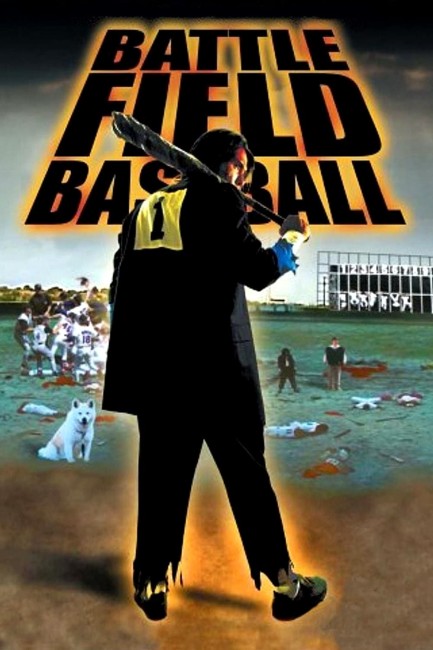 At Seido High School, it is Principal Asakura’s greatest dream for the school team to be able to play in the inter-school finals at Koshien Stadium. However, their rival in the competition is Gedo High who have perfected a form of combat baseball that slaughters the opposing team. The new exchange student Jubei has a reputation as trouble. After Jubei demonstrates his combat baseball techniques against bullies, Asakura sets his hopes on recruiting him to help them win against Gedo High. Jubei does not want to play baseball because as a child, he threw a pitch that killed his father. He is persuaded by Asakura to set his feelings aside for the sake of the team. However, on the day of the match against Gedo High, Jubei is jailed and the entire team slaughtered. Released, Jubei, along with resurrected members of the team, determines to take on Gedo High.

Subsequent to Battlefield Baseball, Yudai Yamaguchi went onto direct the likes of Chromartie High School (2005) in a similar gonzo vein, The Present (2005), Tanami: The Baby’s Curse (2008), Dead Ball (2011), which returned to more gonzo baseball exploits, and Abductee (2013), as well as episodes of the anthologies Ten Nights of Dreams (2006), An Encyclopaedia of Unconventional Women (2009) and The ABCs of Death (2012). He also co-directed Yakuza Weapon (2011) along with this film’s star Tak Sakaguchi and most famously Meatball Machine (2005), which started the fad for gonzo Japanese splatter films.

When I first saw it as a dvd cover description, the idea behind Battlefield Baseball – that of a high school baseball game that has been turned into an over-the-top deathsport – held a great deal of appeal. You get the impression that Yudai Yamaguchi set out to make Battlefield Baseball as a confluence of two successes that came out around the same time – the huge Japanese hit of Battle Royale (2000) with a classroom of high school students trying to eliminate one another and secondly of Stephen Chow’s Shaolin Soccer (2001) wherein the traditional game of soccer was given a wackily over-the-top spin.

That’s not quite what we end up with in the film however. Yudai Yamaguchi seems more interested in delivering a film that is as nuttily absurd as possible. The hero breaks into song to tell the story of his childhood and at other times turns to address the camera direct; the character of Bancho keeps changing and being played by different actors, each with a blonde hairdye job; characters are killed and then inexplicably resurrected from the dead or else turned into cyborgs, while all of those who have been killed throughout are alive again when it comes to the finale.

At the end of the film, the narrator informs us that while everybody was celebrating the triumph, a man who was seen perpetually drinking on the sideline has expired from alcohol poisoning, before revealing that the narrator is in fact the man’s dog.

In the end, Battlefield Baseball fails to even sustain a baseline of realism so that it feels hard to invest in anything that happens – at least from any kind of dramatic perspective. For instance, unlike most sports movies, Yamaguchi almost never engages us in any of the sporting events – there is no drama with people racing to get to bases, the fight to win the match’s deciding point and so forth. Rather Yamaguchi seems to be just creating a nutty show with people being killed – although even then there is little in the way of gorily over-the-top splatter. Nor does the evident low-budget make many of the effects work very convincingly.

What we have at least feels like it is looking forward to the gonzo Japanese splatter film that came along a couple of years later with Yamaguchi’s Meatball Machine and the likes of Tokyo Gore Police (2008), Vampire Girl vs Frankenstein Girl (2009), Mutant Girls Squad (2010), Zombie Ass: The Toilet of the Dead (2011), Dead Sushi (2012) et al. On the whole though, what we have is a film that feels like it wants to be more silly and absurd than it ever wants to settle down and engage us as a film.