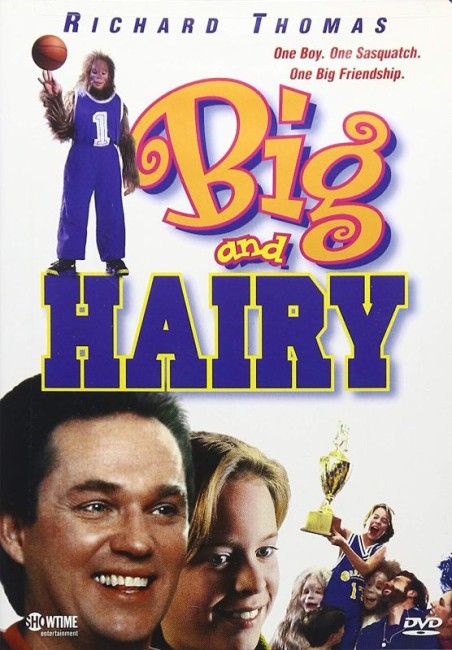 Young Picasso Dewlap’s parents have moved from Chicago to small Cedar Island, which is run by lawn ornament manufacturer Ludlow Bumstock. Picasso feels friendless and out of place there, especially on the school basketball team The Lawn Ornaments. Picasso then encounters and befriends a Bigfoot and finds that the Bigfoot has a talent for basketball. He and the coach Mr Donovan conspire to have the Bigfoot, which they name Ed Tibbetts, enrolled in school and then recruited to join the basketball team. There he quickly proves to be the star player.

This Canadian children’s film comes with an exceedingly slight gimmick premise – Bigfoot is recruited into a high school basketball team. It came at the point where Bigfoot was making a turnaround from the quasi-real tabloid monster it had been throughout the 1970s and rediscovered as something cuitsie in children’s film, which began with Harry and the Hendersons/Bigfoot and the Hendersons (1987).

In unfolding, Big and Hairy fulfils one’s low expectations of it. There is a good deal of inanely silly slapstick, – in its favour, it is not too weighed by cliches and does eventually arrive at a message of people winning out on their own terms with an amiability that does not stick too badly in the craw. The Bigfoot makeup and the mime performance from Trevor Jones looks dopey. There is one cute gag sequence with the kid playacting Star Wars (1977) and Bigfoot taking the role of Chewie.

The only recognisable name among on the cast list is Richard Thomas, alias John-Boy of The Waltons (1971-81) fame, who seems in a positively manic mood as the alternate culture father.