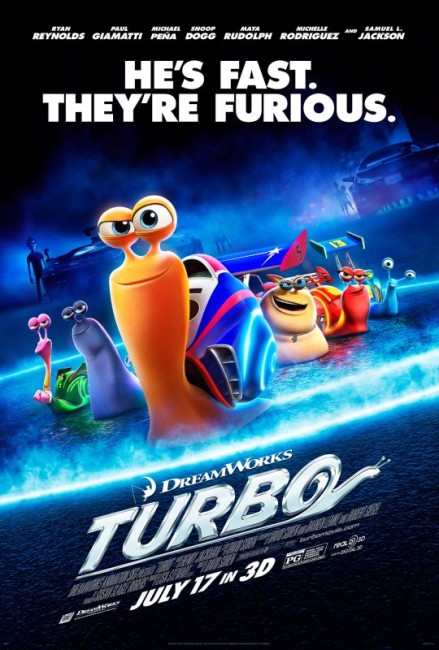 Theo, or Turbo as he prefers to be known, is an ordinary garden snail. He has a love of watching Indy 500 races on tv and plays out the races to the point that the other snails are sick of hearing about it. One day Turbo strays from the garden and ends up in the midst of a street race. He is on the hood of a car as the race starts and ends up sucked inside the engine turbine and blasted through the nitrous oxide mix. Back in the garden, Turbo finds that this has produced some odd effects with he making car alarm noises and seeming to be able to broadcast as a stereo. He then finds that he can move with great speed. After his best friend Chet is snatched by a crow, Turbo races to rescue him. The two of them are then captured by Tito who runs the Dos Bros taco truck with his brother Angelo. As a sideline, Tito runs a novelty snail race and is amazed when he discovers Turbo’s ability to move very fast. Turbo then outlines his dream to Tito – of being able to enter and win the Indy 500. Being told it is impossible, both Turbo and Tito set out to fulfil the dream despite great odds and obstacles in their path.

The earlier DreamWorks animated films seemed to work well and offered the flagging Disney animated film of the 00s a run for their money; on the other hand, with some of the more recent efforts such as Rise of the Guardians and the Shrek sequels, DreamWorks have felt like just another animation studio peddling formula product. Their previous film The Croods at least was one positive blip that bubbled with a freshness of energy and humour. Mostly though, DreamsWorks’ animated films have started to seem only a couple of rungs above the utterly bland formulaic work of Blue Sky Studios – the makers of the Ice Age films.

Turbo comes out amid a busy summer season for animation, with the likes of Despicable Me 2 (2013), Blue Sky’s Epic (2013) and Pixar’s Monsters University (2013) all having appeared in the space of two months, while The Croods is also still playing in theatres. (Not to mention Disney’s Planes/World of Cars: Planes (2013), which came out three weeks after Turbo and featured an almost identical plot). As a result, Turbo ended up with an indifferent box-office run from audiences who had already had their fill with the aforementioned hits in the previous weeks.

There seemed something appealingly cute about the premise of Turbo when I first read about it – the wacky notion of a snail that enters the Indianapolis 500 – but it became immediately apparent from even the trailer that the film was playing everything to formula. I also had a problem with the basic premise that asks us to believe that a snail falling into a nitrous oxide injector will not only make it move at Formula 1 speeds but also for some reason uncontrollably emit car alarm and siren sounds, turn its eyes into headlights and randomly start to boom with music as though it had stereo speakers installed. The effects on a human who ingests nitrous oxide can be best explained by the chemical’s informal name ‘laughing gas’ – outside of its use as a fuel booster, nitrous oxide is more commonly used as an anaesthetic. Now, I haven’t read any research on the subject and cannot say for certain that a snail soaked into nitrous oxide won’t start behaving like a car but I just find such an outcome exceedingly unlikely from a biochemical standpoint.

There is nothing wrong with Turbo as such. It is a decent little effort that does the formula of the modern animated film well enough. It is being called Cars (2006) for young kids but the plot is more of a straight cobbling of cliches from just about every sports films since Rocky (1976) – of the rank outsider who gets the chance to enter the big competition and does so against great odds and even efforts to sabotage him. That and the standard character of the impossible dreamer with visions far beyond the meagre horizon who is told to dismiss them and accept the ordinary life. Turbo regurgitates all of this in very familiar ways. There are laughs, cute characters, the familiar emotional triumphs and setbacks, the cliche where the hero finds himself bereft of his superpowers and must rely on his natural abilities at the crucial climactic moment. It is also a film where you feel you can predict every single move and that little stands out with any freshness or originality.

The characters were later spun out into an animated tv series Turbo Fast (2013-6).