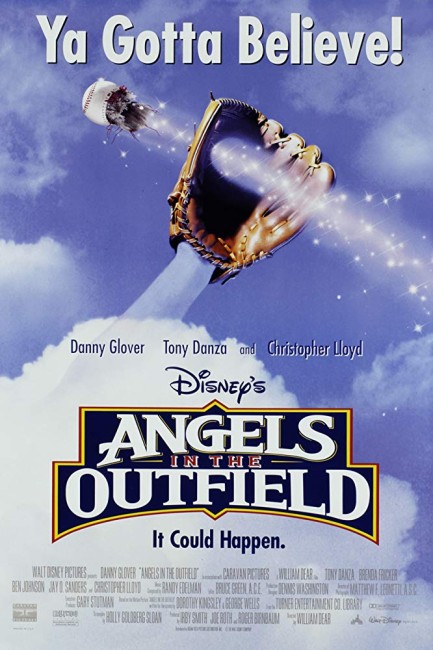 Young Roger Beaumont is placed in a foster home by the court. His father, a drifter and loser, says that they have as much a chance of being a family again as The Angels baseball team have of winning the pennant. Roger prays that The Angels will win and is startled when he sees angels aiding the players. He learns from one angel that only he can see them. Coach George Knox comes to believe that Roger can see the angels and causes controversy when he starts to make plays based on his advice.

This is a remake of Angels in the Outfield (1951). The remake came as part of a mid 1990s return to wholesome family movies that outrightly espoused Christian values – others included the remakes of Miracle on 34th Street (1994) and The Preacher’s Wife (1996) and the tv series Touched by an Angel (1996-9). Angels in the Outfield shares much in common with the remake of Miracle on 34th Street – besides being remakes of films forty years old, both films are positive and upbeat and are unabashedly pro-Christian.

Angels in the Outfield 1994 holds a very Baptist set of values – reinforcing the view that it is always good to pray to God, that one should not use foul language in the presence of the Almighty (or at least His agents) and that having a family is nearly the most important thing of all. The scene at the press conference where Tony Danza takes a stand to speak out in favour of believing in the angels is remarkably similar to the climax of the Miracle on 34th Street remake, particularly the scene where Brenda Fricker stands up to point out the apparent hypocrisy of condemning the belief in angels when it is perfectly acceptable for other players to cross themselves and pray before a game.

In fact, despite a difference of 43 years, this is a far more pious film than the original was – although the scene where every character in the film, including domineering manager Ben Johnson, tightass PR man Taylor Negron and a coarse, bad-tempered bully in the stands, stand up and wave their arms to inspire Tony Danza, thus demonstrating faith, does get a little too much. Like the remake of Miracle on 34th Street, the faith that the film endorses is odd – it seems more like an existential self-reliance than faith – the idea that the numinous serves best when it does not matter if it is there or not and where the belief in it alone is enough to inspire.

Unlike the sanctimonious seriousness of Miracle on 34th Street, Angels in the Outfield keeps itself light and enjoyable. When it pulls the heartstrings, it does so likeably and never allows the sentiment engendered to step over into the unwelcome. The film is at its most likable in its etching of the relationship between young Joseph Gordon Levitt – later to play the pimply obnoxious teenager on 3rd Rock on the Sun (1996-2001) and become a serious actor in the 00s – and Danny Glover, who gives a great performance as his bad temper starts to thaw out throughout. In the role of one of the angels, Christopher Lloyd is underused.

Director William Dear has had a strong genre association, having made the time-travel film Timerider: The Adventure of Lyle Swann (1982), the cute Bigfoot film Harry and the Hendersons/Bigfoot and the Hendersons (1987), the not-very-funny James Bond spoof If Looks Could Kill/Teen Agent (1991), the tv movie Santa Who (2006) and the horror film Simon Says (2006). Dear also returned to baseball fantasy in The Sandlot: Heading Home (2007) and made two further non-genre baseball films with The Perfect Game (2009) and A Mile in His Shoes (2011).