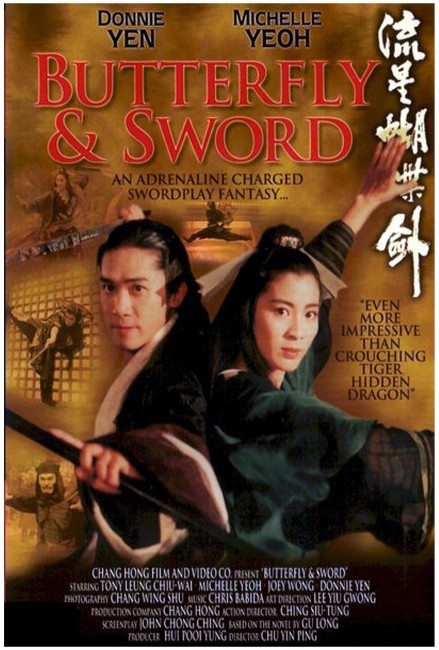 Meng Sing Wan lives a happy life with his wife Butterfly, she being unaware that he and Ko, the older woman who raised him, are swordfighters. Ko is asked by Eunuch Tsao to eliminate his rival Suen Yu Pak before Tsao dies. However, in accepting the assignment, Ko and Meng Sing Wan face treachery and deceit within their own faction, while also having to take on the deadly Suen Yu Pak.

This is one of the Wu Xia films produced in Hong Kong in the amazing period between the 1980s and late 1990s. The genre was popularised by the hits of works like Zu: Warriors from the Magic Mountain (1983) and A Chinese Ghost Story (1987). It was however Swordsman (1990) that took the swordplay genre that had been regularly milked by the Shaw Brothers going all the way back to the 1960s and gave it a wildly fantastical spin.

Amid the Wu Xia renaissance, Butterfly & Sword is one of the finest of the genre. This is despite a plot where it is frequently difficult to work out what is going on. You are never sure in the subtitling, for instance, if Michelle Yeoh is meant to be the hero’s sister or who she is. Nor is the demarcation between the flashbacks needed to set up the backstory and the present that well conveyed either.

Nevertheless, audiences for this type of film haven’t come for the plot and when it comes to the swordplay sequences, Butterfly & Sword is quite amazing. The action sequences are directed by Chin Siu-Tung, director of the stunning A Chinese Ghost Story (1987), as well as Swordsman II (1992), the pinnacle of this flying swordsman genre, and the action sequences on fairly much every other Hong Kong film.

The film literally explodes into action in the first scenes with Tony Leung and Michelle Yeoh’s bandits flying in to attack a caravan, detonating people with their punches and using their own clothing as slingshots to trampoline one another off. The middle of the film has a remarkable sequence set in a forest with the heroes impaling their enemies on branches while sliding down the midst of a split-open bamboo plants and the like.

However, it is at the climax where the film reaches the truly mind-boggling featuring blinding sword combat with the combatants running around the walls of the room; the hero chopping his way through people’s bodies and a giant pillar that the villain swings against him; the heroine wielding wound silk as a weapon; and a dizzying finale involving a juggled iron ball and the villain employing a special move that has him spinning around the room like a top.