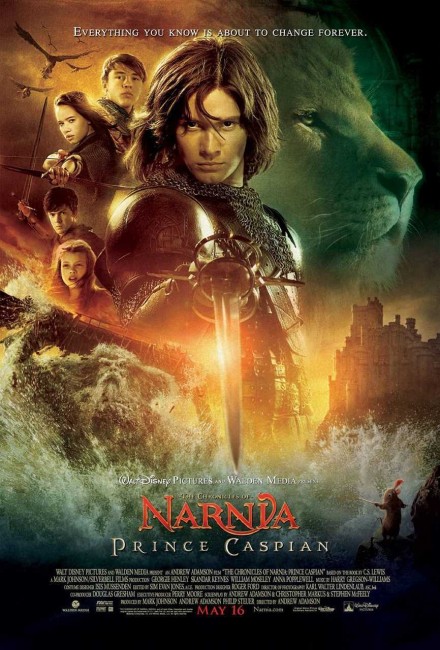 In the kingdom of Telmar, Prince Caspian is hurried away from the palace by his tutor Dr Cornelius after his uncle Miraz’s wife gives birth to a son. Cornelius tells Caspian that his life is in danger, as Miraz will now surely kill him, no longer needing him to be there to rule in his name. Pursued into the forest by Miraz’s soldiers, Caspian blows upon Susan’s horn for help. On Earth, it is one year after Peter, Susan, Edmund and Lucy were kings and queens in Narnia. They are sitting on a train platform as the horn call comes and whisks them back to Narnia. But in Narnia, it is hundreds of years later and Cair Paravel lies in ruins, with all the talking animals and magic creatures having been driven out by the Telmarines. Caspian encounters the creatures of Narnia in the woods and they swear loyalty to him. Peter, Susan, Edmund and Lucy join Caspian and the creatures of Narnia as they prepare to stand up against Miraz and the vastly larger Telmarine forces.

Prince Caspian is the second of the films based on C.S. Lewis’s Narnia books. The film series had begun with The Chronicles of Narnia: The Lion, The Witch and the Wardrobe (2005), which proved to be one of the most successful films to follow on from the modern fantasy fad begun with Lord of the Rings. Production company Walden Media had announced plans to film all seven of C.S. Lewis’s books (although with Prince Caspian‘s well less-than-expected box-office showing, which caused Disney to decline co-production on the rest of the series, the future of the other films remains to be seen).

Prince Caspian (1951) was the second published of C.S. Lewis’s books (although the fourth in terms of the series’ internal chronological order). The book had previously been filmed as part of the BBC’s series of Narnia tv adaptations with The Chronicles of Narnia: Prince Caspian (1989), although this was a considerably condensed adaptation with the entire story being told in two half-hour segments and mounted on a less-than B-budget.

I must confess to not having liked The Lion, The Witch and the Wardrobe at all. I don’t have a huge amount of time for C.S. Lewis’s Christian allegories pitched as children’s fables, which the film’s promotional campaign very much played into. And director Andrew Adamson is surely the fantasy genre’s equivalent of Ron Howard – a director who never had an original idea in his life but just keeps reworking and reshuffling everyone else’s ideas around with earnest and emotive cues, a swelling score and an ardent belief in Mom and apple pie in the hope that someday someone will mistake him for a great filmmaker. Adamson clearly wanted to make The Lion, The Witch and the Wardrobe as another Lord of the Rings and kept trying to copy Peter Jackson’s epic flourishes. However, The Lion, The Witch and the Wardrobe fell flat due to Andrew Adamson’s lack of feel for the epic and visual effects that were not always up to scratch.

The good news is that by the time of Prince Caspian, Andrew Adamson has sat down and studied his Peter Jackson sufficiently to have conquered his lack of epic flourish. While The Lion, The Witch and the Wardrobe failed to give dramatic life to its fantasy, Adamson gives Prince Caspian all he can in terms of sweeping shots, camera-filling scenery, lavish sets and in playing the battle scenes with maximum widescreen dramatic excitement. The spotty CGI effects representing the talking animals and magic creatures in the first film have been improved and are now flawlessly convincing. The film is filled with big moments of CGI wow with water gods appearing to tear apart bridges or the camera swooping through the air following birds as they carry the Narnians into the Telmarine castle under the cover of night.

However, the problem that Andrew Adamson now has is exactly the opposite to the one that The Lion, The Witch and the Wardrobe suffered from. Having finally hit on working out what Peter Jackson did in making Lord of the Rings work, Adamson keeps doing it like a kid with a new toy over and over until Prince Caspian becomes almost all epic flourish and battle scenes to the exclusion of almost anything else, including even C.S. Lewis’s story.

While The Lion, The Witch and the Wardrobe kept fairly accurately to the C.S. Lewis book, Adamson regards the original text liberally when it comes to Prince Caspian. Many aspects of the story have been substantially curtailed – like how talk of Narnia only exists as suppressed legends and stories and how Caspian heard about these from his tutor Dr Cornelius. The scenes where only Lucy can see Aslan and insists on following his guidance, while the others ignore it (which Lewis intended as an allegory for faith and divine guidance) has almost no significance to the story.

In its place, Andrew Adamson pumps up other scenes – the summoning of the White Witch, the battle scenes and the like – until they are the whole of the film. When that is not enough, he creates entire scenes – notably the night attack on the Telmarine castle – that were never there in the book. This also means that Christian allegory that C.S. Lewis tried to make in his book has been drowned and is impossible to detect, meaning that Prince Caspian was sold as a fantasy film on its own right without the parallel marketing pitch to the Christians that The Lion, The Witch and the Wardrobe came with.

One of the most substantial changes that the film makes to the book is bumping up the ages of the children. For C.S. Lewis, the children in the books were always adolescents, but the three years between the making of the films has meant that some of the children have noticeably started to hit puberty. One of the most drastic changes is where Andrew Adamson adds a hint of romantic attraction between Susan and Prince Caspian. (In the book by contrast, C.S. Lewis does not even have Susan meeting Caspian until the end of the story). I mention this because it is a betrayal of C.S. Lewis who in later books had Susan specifically banished from ever returning to Narnia because she had grown up and gotten interested in boys (one of the more controversial issues of sexism that dogs Lewis and the Narnia stories).

The children again do capably in their roles, although newcomer Ben Barnes is wooden as Caspian – he seems to have been cast for no other reason than to radiate pretty boy good looks. (For some reason, though Barnes is British, he and all the Telmarines have been outfitted with East European accents). The scene-stealer for much of the film is the always underrated Peter Dinklage. Dwarf actor Warwick Davis also turns up in the role of Nikabrik, being the only person to have appeared in both filmed versions of Prince Caspian – he having essayed the role of the mouse Reeipcheep in the BBC version.

Next up in the film series was The Chronicles of Narnia: The Voyage of the Dawn Treader (2010). Prince Caspian was parodied in Disaster Movie (2008).