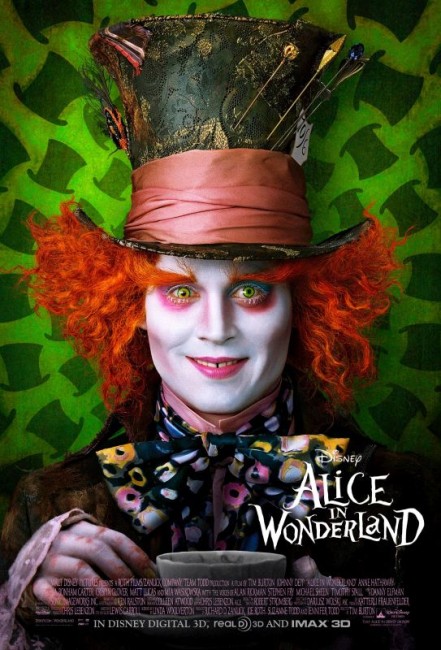 19 year-old Alice Kingsleigh arrives at a society function where she discovers that everything has been set up so that Lord Ascot’s son Hamish can propose to her. Not knowing what to say with everyone watching, she runs away. She follows a white rabbit that is wearing a waistcoat but ends up falling down the rabbit hole after it. She is transported into a fantastical land inhabited by strange creatures and talking animals where she has difficulty retaining her size. People think she is another Alice who once visited there but she insists it could not be her because she has no memory of doing so. The crazed Red Queen holds the land under her tyranny, unleashing her fire-breathing Jabberwocky against all threats. When she learns that Alice has returned, The Red Queen orders her captured. Alice befriends The Mad Hatter but he allows himself to be captured so that Alice can escape. Alice must then venture into the Red Queen’s castle to obtain the Vorpal Sword, the only means of destroying the Jabberwocky. She joins forces with the Red Queen’s sister The White Queen to defeat her and save the Mad Hatter from execution.

Tim Burton will always be one of the great names in fantastic cinema. Emerging out of the Disney stables in the 1980s, Burton made his directorial debut with Pee-Wee’s Big Adventure (1985) and went onto a string of successes with the likes of Beetlejuice (1988), Batman (1989), Edward Scissorhands (1990), Batman Returns (1992), The Nightmare Before Christmas (1993) and Ed Wood (1994). All of these are great genre films, filled with amazingly stylised production design, beautifully operatic musical scores, an eccentric sense of humour and oddball outsider heroes. With these, Tim Burton created a unique body of work that would be regarded as classic in anybody’s eyes.

However, about the mid-to-late 1990s – the point that Tim Burton was caught up in a Superman project that went nowhere – see the documentary The Death of “Superman Lives”: What Happened? (2015) for details – something happened. Burton has kept regularly producing films every couple of years since and these have all been reasonable box-office successes. While many of them are by no means bad films, what seems lacking is the unique idiosyncrasy of Burton’s earlier work. These have included efforts like Sleepy Hollow (1999), Planet of the Apes (2001), Big Fish (2003), Charlie and the Chocolate Factory (2005), Sweeney Todd: The Demon Barber of Fleet Street (2007), Dark Shadows (2012), Frankenweenie (2012), Big Eyes (2014) and Dumbo (2019). The one exception to this that recaptured the old Burton glory was the Burton co-directed stop-motion animation feature Corpse Bride (2005).

The quirky characters, the love of uniquely designed worlds, the oddball sense of humour are there but there also the feeling that something was missing or that Burton’s effort had been dialled in by autopilot. It feels increasingly as though Tim Burton has sealed himself in a hermetic world – always working with the same stars (Johnny Depp, Helena Bonham Carter), the same musician (Danny Elfman) and frequently the same designers and writers. He has become like Picasso, Anne Rice and George Lucas – someone who had a big hit and found acclaim early in their careers and spent the ensuing decades recycling the same thing in slightly different forms, rather than exploring new directions.

Here Tim Burton turns to Lewis Carroll’s Alice’s Adventures in Wonderland (1865) and its sequel Through the Looking Glass, and What Alice Found There (1872). These have been filmed numerous times before (see below). Even before sitting down to watch, I had some difficulty with the idea of a Tim Burton version of Alice in Wonderland. The problem is that the characters and creatures of Alice in Wonderland have a distinctive look in people’s minds due to the original John Tenniel illustrations. Almost all other adaptations have drawn from these, while lines of dialogue – “curiouser and curiouser”, “off with her head”, “down the rabbit hole”, the Happy Un-birthdays – have entered into popular jargon. On the other hand, Tim Burton is a director who likes to stamp his own unique look on each film he makes. The question is how can Burton make his own imprint while still conducting a faithful telling – what wriggle room does the story allow for him to improvise?

The result ends up more like a tug of war between the mutual styles of Tim Burton and Lewis Carroll – one that Carroll largely loses. One of the notable aspects of Tim Burton’s films from 1999 onwards is that he takes on other people’s stories – Washington Irving’s The Legend of Sleepy Hollow (1819), remaking Planet of the Apes (1968) and Willy Wonka and the Chocolate Factory (1971), filming Stephen Sondheim’s musical Sweeney Todd: The Demon Barber of Fleet Street (1979) – and constantly either misunderstands the tone of the original or rewrites a much loved work beyond the point of recognition.

Tim Burton’s Alice in Wonderland is Lewis Carroll’s story no longer as a nonsense adventure but having been rewritten into the formula for the modern epic fantasy film a la The Lord of the Rings, The Chronicles of Narnia etc. Thus the Red Queen becomes an evil ruler casting a dark shadow over the magical kingdom; the Jabberwocky is now a fire-breathing dragon; Alice is the fantasy heroine with a preordained role as saviour of the land (whose destiny has even been foretold in a scroll) where she must obtain an all-important magical sword to defeat the dragon; the Bandersnatch is merely a fierce creature she tames in the course of her adventure; while the film climaxes on clashing armies that has become de rigeur in fantasy cinema ever since The Lord of the Rings.

The problem is that Lewis Carroll’s originals were a picaresque, whereas Linda Woolverton’s script feels the need to force the original out of shape to fit the modern adventure storytelling format, creating recognisable villains, an adventure plot, giving the heroine a struggle, creating motivation for characters like the Mad Hatter, giving the story a big climactic showdown and just desserts for the villains, not to mention Alice achieving a very modern end self-realisation about following the path of her heart, where none of this ever existed in the originals. It is even a Lewis Carroll where the nonsense and absurdism has been muted and everything unforgivably made to make sense.

There are times that Alice in Wonderland has more in common with The Wizard of Oz (1939) than Lewis Carroll – the Red Queen is turned into something akin to The Wicked Witch of the West, while Anne Hathaway’s White Queen is the equivalent of Glinda the Good; The Mad Hatter, Bayard and Cheshire Cat become the equivalent of Dorothy’s companions; The Caterpillar pops up to give inscrutably sagely advice like The Wizard of Oz; Alice only desires to go back home again; there are even the bookend sequences set in the real world featuring counterparts of the Wonderland characters. There is also something of Hook (1991) to the story where the film poses as a sequel to the original Alice in Wonderland with Alice now grown up and having forgotten about her earlier childhood visit – although not nearly enough is made of this.

Moreover, the script plays mix and match by making the encounters with the creatures the same as they were in the original, leaving us confused whether the film is trying to be a sequel or a rehash of the basic story. The only difference this seems to serve is to allow Alice to be played more as a young woman than as a child. This certainly gives a darker tone to the story than any standard film adaptation, which is usually always conducted as a children’s story.

Expectedly, the film has been beautifully production designed – all in the style that is distinctively Tim Burton’s. The mix of live-action, green screen and CGI animation is extremely good. However, the warmed-over epic fantasy by-the-numbers story that drives it is disappointing. It is not Lewis Carroll, it is just an epic fantasy copycat that has borrowed his characters. The film also comes in the fad du jour of 3-D but rarely has any 3-D feature of the last couple of years managed to make so little of the added dimension – unlike Avatar (2009), which used the 3-D to explore a fantastical world, it is hard to discern any reason why Alice in Wonderland was released in 3-D. (The problem here being that Alice in Wonderland was only converted into 3-D in post-production, rather than originally shot that way).

There is a certain cult that says that anything that Johnny Depp does is great. He is usually a wonderful actor and his Mad Hatter here is a strange creation. However, the character is ill defined, seeming to randomly drop into Scottish accent for no particular reason. Depp delivers an okay performance but will The Mad Hatter be one of his great roles? It is hard to say.

Mia Wasikowska is being labelled the next big thing (for these five minutes at least). She has a willowy beauty and moments of forthright strength as Alice but there is not enough where she stamps the role as her own – there is the crucial lack of Alice’s perpetual expression of bewilderment as she travels through Wonderland, for instance.

Anne Hathaway is a good actress but does little with the role of the White Queen. Crispin Glover is okay as the Red Knave – the way he is outfitted, one would swear is the son of British actor Ralph Bates. The best performance in the film comes from Tim Burton’s girlfriend Helena Bonham Carter as the Red Queen. It is a part where Bonham Carter’s delight in putting on haughty airs manages to steal the show whenever she is around – “I love a warm pig belly for my achy feet” indeed.

Many of the cast and with Tim Burton as producer reunited for a sequel Alice Through the Looking Glass (2016).