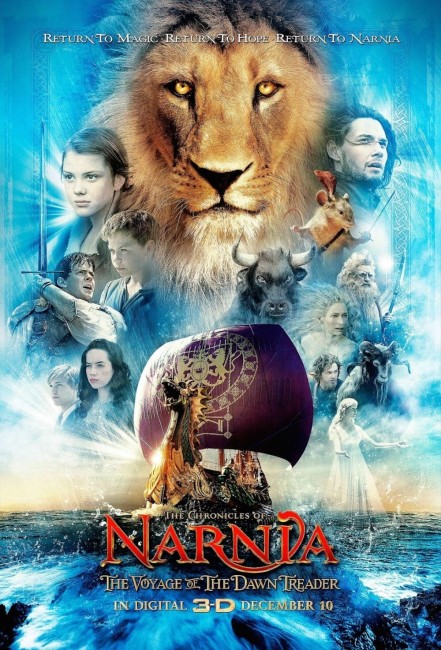 Lucy and Edmund Pevensie are now staying with their obnoxious cousin Eustace Scrubb and his family, while Susan and Peter have been sent away to the USA. Lucy and Edmund are arguing with Eustace, who is dismissive of their stories about Narnia, when the painting of a ship at sea on the wall comes to life and drags them in. They are rescued and taken aboard the Dawn Treader, a ship commanded by their old friend Prince Caspian, now the King, who is on a mission to the Lone Islands to rescue seven lords who went into exile during the time of his uncle’s cruel reign. Lucy, Edmund and a reluctant Eustace join the search as they visit the various islands. There they are captured by slavers; visit an island where they encounter a fierce one-legged people who have been rendered invisible and where Lucy is tempted by a book of spells that could make her beautiful like Susan; visit another island where a pool turns every object placed into it to gold and immediately causes the party to start fighting with each other, while Eustace finds a magical bracelet that transforms him into a dragon. Finally, they follow the Blue Star to an island that causes the things they fear the most to be manifest.

I was not a fan of the other Chronicles of Narnia films, nor the C.S. Lewis books, so failed to greet The Voyage of the Dawn Treader with a huge degree of enthusiasm. I felt further off put by the fact that the film had undergone a hasty post-production conversion to 3D to exploit the fad for 3D films following the massive success of Avatar (2009). What the initial makers of other films converted in post-production such as Alice in Wonderland (2010), Clash of the Titans (2010), My Soul to Take (2010) and most notoriously The Last Airbender (2010) failed to see was that their haste to jump aboard this box-office bandwagon with rushed and shoddy transfer to 3D of films that were not originally shot that way was polluting a potentially worthwhile cinematic gimmick and turning audiences off.

This time, director Andrew Adamson, who first found fame as the co-director of Shrek (2001) before moving into live-action with the Chronicles of Narnia films, steps back from the director’s chair and hands things over to British director Michael Apted. On the face of it, Michael Apted is not a director that stands out as the most ready to take on board a fantasy franchise. Apted comes from a background in British tv, including the famous 7 Up documentary series and dramatic works such as Stardust (1975), Agatha (1979), Coal Miner’s Daughter (1980), Gorky Park (1983), Thunderheart (1992), Nell (1994) and Enigma (2001). Apted has made the occasional effort that has sat on the borderline of genre material – the medical thriller Extreme Measures (1996), the James Bond film The World is Not Enough (1999) and the absurd Jennifer Lopez woman takes revenge film Enough (2002). Not a background that suggests a natural flair for fantastic material or big-budget special effects driven vehicles.

C.S. Lewis’s The Voyage of the Dawn Treader (1952) is a largely episodic book. Lewis wrote the Narnia books as Christian allegories containing simple moral lessons for children – thus each of the islands visited in the story exists to make a point about the temptation of riches, the lure of beauty, of learning hubris and the like. The film keeps faith with C.S. Lewis and follows the story on most points, although some of the adventures, in particular the rescue of Lord Rhoop are elaborated out in order to provide a big effects sequence to climax the film that was not there in the book. Other aspects, notably the encounter with the slavers is truncated, while Eustace’s transformation into a dragon is extended throughout the entire story rather than simply until the party leave that particular island. For some reason, the fallen star who guides them on the final leg of the journey has been recast with a good-looking woman (Laura Brent).

Surprisingly, C.S. Lewis’s Christian allegory is left in. The Lion, The Witch and the Wardrobe played directly on this where the studio conceived a promotional scheme that pitched the film directly to church audiences, but by the time of Prince Caspian this had been swept under the carpet. However, The Voyage of the Dawn Treader makes the Christian allegory the most overt of any of the films so far with Aslan (the series’ Christ analogue) returning at the climax inviting the party to travel beyond the sea to his world (clearly the afterlife) while telling Lucy “In your world, I have another name” and that it is her duty to seek him.

The Chronicles of Narnia: The Voyage of the Dawn Treader comes in around the same level as the other Narnia films – it neither stands out nor is anything that rises above the average. The problem with the film is C.S. Lewis’s strictly ordinary Plot Coupons fantasy (an idea coined by Nick Lowe to describe the type of plotting in fantasy literature where characters must go on a quest to collect several items in order to achieve a goal, thus allowing them to pass through various serial adventures). None of the adventures here seem particularly inspired. The slaver sequence is almost over before it begins; the encounters with the one-legged Duffers is no more absurdly laughable than when it was conducted in the impoverished BBC tv version The Chronicles of Narnia: The Voyage of the Dawn Treader (1989). Nor does Michael Apted give the episodes the epic feel that a story like this needs to soar. The beautiful locations, the visual and creature effects are there but they seem perfunctorily handled and never come to life.

The moral lessons that C.S. Lewis wrote – the avarice caused by the gold pool or Lucy’s desire to enact the spell and become beautiful (which here seems to involve her turning into Susan) are over-stressed until even the most simple-minded in the audience get them. While some of the earlier fight sequences (notably the ones with the slavers) are lacking and others are passable (the fight between Eustace and Reepicheep), Michael Apted at least pumps up the climax to give us a rousing effects sequence with dragon, sea serpent and the Dawn Treader in ferocious combat. It is this sequence that finally hits a height that the other Chronicles of Narnia films have floundered around trying to find and is the standout scene in the series so far.

Georgie Henley, who I always thought was the most talented of the unknown kids that were brought to light in The Lion, The Witch and the Wardrobe, gets fairly much the show to herself, which allows her to shine in a number of scenes. Skander Keynes is not given a huge amount to do, while Ben Barnes does almost nothing throughout the film except stand around and look handsome. Several cast members from the other films, Anna Popplewell and Tilda Swinton, are brought back for no more than 2-3 scenes apiece, while William Moseley’s Peter turns up as part of a single scene. The new actor among the cast Will Poulter has an enormous amount of fun doing the obnoxious but gradually redeemable character. The marvellously cheerful Simon Pegg-voiced warrior mouse Reepicheep steals much of the film when he is around and surely deserves a film all to himself one day.

The character arc where Eustace is transformed into a dragon and comes to see the error of his ways works well, despite the uneven conviction of the visual effects used to represent the dragon. It is in these moments that The Voyage of the Dawn Treader‘s sails start to fill – but the rest of the time it is only intermittent and a ploddingly run of the mill fantasy by the numbers.

Though The Chronicles of Narnia: The Voyage of the Dawn Treader did a more than reasonable $104 million at the US box-office, it failed to earn back its $155 million budget. This has placed some doubt over any future Narnia films. An adaptation of the next Narnia book The Silver Chair has been announced on and off for some years now but seems no closer to getting any go-ahead.