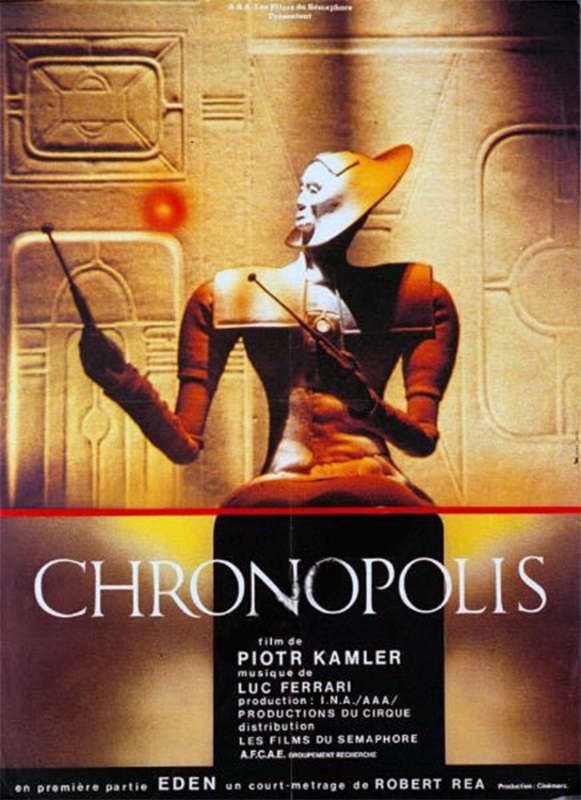 The obscure and all powerful beings that reside in the city of Chronopolis detect humans climbing towards them. They use their alchemical powers to control and rearrange matter and create a ball. One of the climbers falls but is taken up to the city where he cavorts with the ball.

Chronopolis was the one and only feature-length film of Piotr Kamler. Born in Poland but resident in France for most of his life, Kamler has been making animated shorts since the 1960s and the present – various of these are freely available on YouTube. Chronopolis was made on a $400,000 French arts grant and took Kamler five years to complete. The finished version played at the 1982 Cannes Film festival but subsequent releases remove fourteen minutes and the narration from the original print, leaving a dialogueless film that only runs to 52 minutes.

Chronopolis is not an easy film to pigeonhole. It is about as far away from the animation of Disney and the like as the surrealists shorts of Luis Buñuel and Jean Cocteau are from multiplex dramas and romantic comedies. There is no real plot – for that matter, there is only one figure on screen that can even be said to vaguely resemble a character. What we have resembles less any standard animation than it does something akin to the abstract shorts of Len Lye.

Chronopolis is more of an experimental art film than one that you sit to enjoy. Like experimental films, it is something where you appreciate the creativity rather than become absorbed in the story and drama. Piotr Kamler has a wild creativity. The city is all pipes and shapes – sort of like a collision between Art Deco and the world of Metal Hurlant. The inscrutable beings that live there are like the sculpted reliefs we get in Egyptian archaeology. Much of the film consists of the beings’ meditations that involve creating balls and ovoidal shapes that move about and metamorphose.

At the beginning, we see a set of human-like figures climbing a vertical wall, which is supposed to be a mountainside. One of the figures falls and is transported away to the top of a pipe where he is joined by a ball. In direct contrast to the meditations of the inscrutable figures of the first half, these scenes become light and jovial in nature as the man dances and plays with the ball. There is nothing more to Chronopolis than that. Interesting but more of an abstract short than a real film.