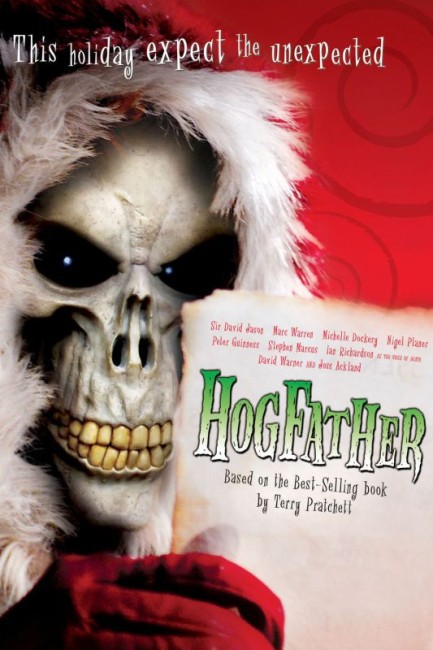 The Discworld flies through space supported by four elephants that stand on the back of the giant turtle A’Tuin. On the Discworld, it is Hogswatch – the one night of the year when the Hogfather travels the world, leaving gifts for children. In the city of Ankh Morpork, Lord Downey, the head of the Guild of Assassins, receives a visit from the shadowy Auditors who give him the commission of killing the Hogfather. Downey assigns the job to the creepy Mr Teatime who gathers a band of rogues to perform the task. They hijack the pick-up cart of the Tooth Fairy, which grants them access to the Tooth Fairy’s castle from which Mr Teatime intends to cast a magic spell on all the children’s collected teeth, which will allow him to control what they think. Meanwhile, Death, whose job it is to guide souls into the afterlife, is puzzled by the appearance of dead mythical creatures (as they are killed in the Tooth Fairy’s castle by Mr Teatime’s cohorts). He discovers that the Hogfather has disappeared and so takes it upon himself to perform the Hogfather’s job and deliver the Hogswatch presents around the world that night. However, Death’s non-human ways prove somewhat at odds with the traditional message of Hogswatch. Meanwhile, Death’s granddaughter Susan is working as a nanny. When she discovers what is happening, Susan decides to investigate. She discovers that by The Auditors killing Hogfather, this will alter people’s beliefs – and because the Hogfather originated as a sun deity, this will mean that the sun will not come up tomorrow. Meanwhile, at the Unseen University, the wizard Mustrum Ridcully discovers that all manner of other imaginary creatures are now suddenly coming into being, including the Verruca Fairy and the God of Hangovers.

Although his star was somewhat eclipsed by J.K. Rowling during the 2000s, Terry Pratchett was one of the foremost fantasy writers in the world. At one point, Pratchett was the No 1 most read author in the UK. Beginning with The Carpet People (1971) published at the age of 23, Pratchett put out a great body of work, averaging at least two books a year since the 1980s and up until his death in 2015. Pratchett’s work was all comedic where he frequently poked fun at established conventions of fantasy – in his early days, Pratchett was described as a fantasy equivalent of Douglas Adams, a label he himself deplored. His books come with numerous puns and copious jokes, frequently relayed through extensive footnotes.

Pratchett’s most celebrated series was the Discworld books, which began with The Colour of Magic (1983) and extends to 41 books. The Discworld books are self-contained stories but feature many recurring and intermingling characters. It is a universe that allowed Pratchett to poke fun at almost every convention and cliche of fantasy. The characters gained a great love and a massive fanbase, with Pratchett publishing a great many supplementary works, including maps, joke books, cookbooks, works of science about the Discworld and role-playing and computer games.

Pratchett’s popularity had his works often mentioned for potential film adaptation, although few of these have ever emerged beyond the rumour mill. There have been several productions for British television, the first being the Claymation animated Truckers (1992) from Thames Television, a perfectly charming six-part children’s series about a group of gnomes that live in a department store; Johnny and the Dead (1995) and Johnny and the Bomb (2006), two BBC mini-series about a boy who can see the dead; and two previous Discworld animated tv series adaptations, Soul Music (1997) and Wyrd Sisters (1997), from Cosgrove Hall Films, although the quality of animation in both of these was weak. Subsequently, there was also the long-planned tv mini-series adaptation of Pratchett’s non-Discworld novel Good Omens (2019).

Hogfather was the first of a series of Pratchett adaptations conducted for the BBC by The Mob Film Company. It was followed by The Colour of Magic (2008), which adapts Pratchett’s first two books, The Colour of Magic and The Light Fantastic (1986), and Going Postal (2010). Hogfather (1996) was Pratchett’s twentieth Discworld novel. Pratchett’s input in the mini-series is limited to the droll if nebulous ‘Mucked About by Terry Pratchett’.

Hogfather is a nicely made production, although one that does not sit easily on the screen. The problem that Hogfather faces is Terry Pratchett himself in a way. Through the sheer volume of Pratchett’s books, he graduated from a gag writer to works that had a degree of whimsical thoughtfulness beneath and sometimes occluding the jokes. Pratchett was never the best at plots – they sometimes had the feel of rambling. This is amplified when it comes to watching Hogfather on the screen. It feels like a story that takes a long time to go anywhere.

Having not read the Hogfather book, by the one-hour point, I was unsure where the story was heading – Mr Teatime is assigned to kill the Hogfather but the Hogfather appears to be dead or missing and the bulk of the mini-series involves much skulking around the Tooth Fairy’s castle for reasons not always clear; it was hard to work out for a long time how the lengthy scenes with Joss Ackland’s wizard having a shower and the appearance of various mythical characters tied into anything else; while the scenes with Susan capturing creatures that turn up in the basement have nothing to do the rest of the story.

Hogfather is a story that grasps at a wide canvas and a number of plots that all seem to be heading off in their own directions. It does eventually come together, although it is not a tight and easy mesh. For anyone who has never read a Discworld book, the mini-series assumes much familiarity with the world – someone coming in from scratch would surely be completely baffled as to who the characters, especially Death, are.

For a production that is in theory intended as a comedy, director Vadim Jean plays Hogfather surprisingly seriously. Compare the design and Jean’s direction to Josh Kirby’s distinctive covers for the Pratchett books, which play everything up as a comic romp that feels like it falls somewhere between J.R.R. Tolkien and a Carry On film. The show here is sombre in tone, even gloomy at times. Indeed, Hogfather is a surprisingly dark choice to kick off a series of Terry Pratchett tv adaptations.

Some of the most sardonically amusing scenes are those with Death posing as the Hogfather and trying to give traditional Christmas advice to children in a department store – one was constantly being reminded of the dark Christmas take in The Nightmare Before Christmas (1993). There is the charming scene near the end where Death gives Susan a Christmas card, which is waterlogged and has a feather stuck on it – “Albert said to put some snow on it but it appears to have melted … There should be a robin on it but it appeared most uncooperative.” There is even the appealing throwaway image of a mouse version of Death.

Despite its unevennes, Hogfather has a conceptual ambitiousness to it. It deals with ideas well above the level of the average children’s show – see if you can imagine any other children’s tv series trying to explain the idea of personifications and the necessity of imagined creations in the human mind. The end of the show with Death’s soliloquy about humanity’s need to believe in made-up stories, including matters like justice and mercy, even though they have no ontological existence, is marvellous writing. The idea of the Hogfather itself is a fantasy of Christmas where any mention of Jesus Christ has been written out (Pratchett was a renowned atheist) – a Santa Claus that has directly descended from primitive religions without having been filtered through Christianity.

It is satisfying seeing various of Terry Pratchett’s characters and creations brought to life – The Unseen University, the guards of the City Watch, the Assassins Guild, and of course Death, who is possibly the most liked and endearing of all Discworld characters. One of the minus points is Marc Warren’s performance as Mr Teatime, where Warren has been made up with mismatching eyes and plays the role with a weirdly affectedly accent and body language that soon becomes annoying.

Director Vadim Jean first appeared with the acclaimed Leon the Pig Farmer (1993). His one other genre outing was the dreary horror film Beyond Bedlam/Nightscare (1994). His work between that and the subsequent Pratchett adaptation The Colour of Magic has consisted of a handful of films that do not appear to have been seen by many people.