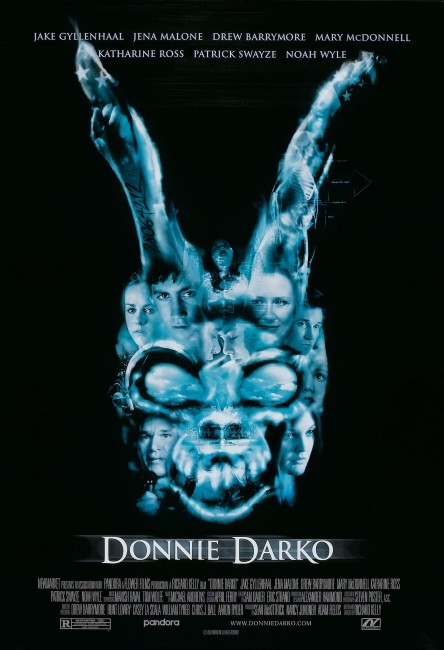 It is near Halloween, 1988. Troubled teenager Donnie Darko receives visions from a talking bunny called Frank who tells him that there are 28 days to the end of the world. Frank soon starts inspiring Donnie to commit acts of vandalism, including flooding the school. The Darko household is struck by an airplane jet that falls out the sky, although where it came from is a mystery. Donnie also begins a tentative romance with Gretchen, the new girl at school. Soon however he is able to see tunnels stretching out of people’s chests and realises that he can now see each individual’s future.

Donnie Darko is a film that must have been a marketing department’s nightmare. It is a film that you are unable to get an easy hold on in trying to describe. Even as a genre film it fits into no easy pigeonholes. It was sold as a horror film in its initial release and the title character experiences visions of the end of the world from a demonic figure, yet Donnie Darko fails to conform to any horror film conventions. There is also much talk about time travel, reference to Stephen Hawking, the lead character sees people’s lifepaths stretching out of their chests like shimmery tunnels and the ending seems to involved a trip back in time, but it is equally hard to think of Donnie Darko as science-fiction. Exactly what Donnie Darko is though is a difficult question.

What Donnie Darko does seem to want to be is an evisceration of WASP conservative middle-class values. For reasons that are never particularly clear, the film is set in 1988 – the only reason one can guess is that this seems to be the era that director/writer Richard Kelly grew up in and that the film represents something autobiographical. Certainly, the film is snide and funny when it comes to 1980s pop culture – making references to the 1988 George Bush [Sr]-Michael Dukakis presidential race, while the time travel is naturally compared to Back to the Future (1985) and there is an hilarious monologue speculating about the sex lives of the Smurfs.

Donnie Darko is often similar to films like Heathers (1989) and Ginger Snaps (2000) that willingly embrace Goth anti-values in a scabrous attack against stifling middle-class values. Here Donnie Darko takes relish in digging into book-banners, political conservatism and, with particularly jagged regard, to motivational speakers and positive thinking seminars. The opening scene mimics Blue Velvet (1986) in its pan through a placid middle-class suburban street while Echo and the Bunnymen’s Killing Moon plays on the soundtrack like a darkly laced warning. (The one thing you have to say about the film is that it does have a great 1980s soundtrack, including choice tracks from Joy Division and The Church and … well okay a couple from Tears for Fears).

What Richard Kelly is trying to do with Donnie Darko though could be anybody’s guess. He wanders all over the place and throws in bizarre ideas – scabrous attacks on 1980s conservatism; satirical jabs at 1980s pop culture; the hero being given visions of things to come and told to conduct acts of vandalism by a talking bunny called Frank (you could almost argue that Donnie Darko is a Goth version of Harvey [1950]); serious discussion of time travel; visions of tunnels of life patterns stretching out of people’s chests, which look not unakin to the water creature in The Abyss (1989). The end where the hero and the plane engine travels back in time and he ends up being killed instead of replaying events is baffling. Certainly, in terms of playing off or even making sense of any of these themes it is an ending that leaves everything hanging unresolved. This did not stop Donnie Darko from becoming an enormous cult film with many people claiming to find great profundity in its mysteries.

Donnie Darko was made by Drew Barrymore’s Flower Productions. It boasts an impressive cast line-up, including Mary McDonnell, Drew herself as a liberal teacher, Noah Wyle from ER (1996-2009) as the physics teacher, Katharine Ross and Patrick Swayze in one of his best roles as the motivational guru who gets a particularly hilarious comeuppance. Of course, the star of the film Jake Gyllenhaal, an unknown at the time the film came out, went onto become one of the major leading names of the decade ahead.

In 2004, an expanded version of the film was theatrically re-released as Donnie Darko – The Director’s Cut. This adds an extra ten minutes of footage. This predominantly consists of material that expands existing scenes. The one thing this version fails to do is add much in the way of clarity. Richard Kelly does add a series of chapter excerpts from a book, which offers much talk concerning Tangent Universes and alternate timelines, but fails to do anything in the way of explain who or what Frank is, why he is driving Donnie to acts of sabotage and what the confusing ending is meant to mean, although there is now a coda that seems to suggest that it is all a bad dream being had by several of the principals. [Richard Kelly’s comments on the audio track finally make things somewhat clearer – the point when Jake Gyllenhaal first encounters Frank creates a Tangent Universe, or alternate timeline, which will collapse within 28 days. Some people within the Tangent Universe have the ability to warn Jake. It is his destiny to send the jet engine through a wormhole back to the primary timeline, killing himself, and preventing the Tangent Universe from occurring]. Peculiarly, this version also deletes Echo and the Bunnymen’s Killing Moon from the opening and much less effectively substitutes INXS’s Never Tear Us Apart.

S. Darko (2009) was an equally baffling and sequel, featuring a now teenage Daveigh Chase who played the young sister here undergoing similar experiences. This was poorly regarded by fans of this film.

Richard Kelly next emerged with Southland Tales (2006) set in a near-future L.A.. This was booed on its Cannes reception and then substantially re-edited before release to wildly mixed reviews. A similar reception greeted Kelly’s third film, the baffling The Box (2009). Kelly also wrote the screenplay for Tony Scott’s completely madcap Domino (2005), supposedly the biopic of a real-life bounty hunter, which veers off into genre territory. Kelly’s company Darko Entertainment has also produced a handful of films, including I Hope They Serve Beer in Hell (2009), God Bless America (2011), Bad Words (2013), Hell Baby (2013) and Happy Birthday! (2016).

(Winner for Most Overrated Film at this site’s Best of 2001 Awards).