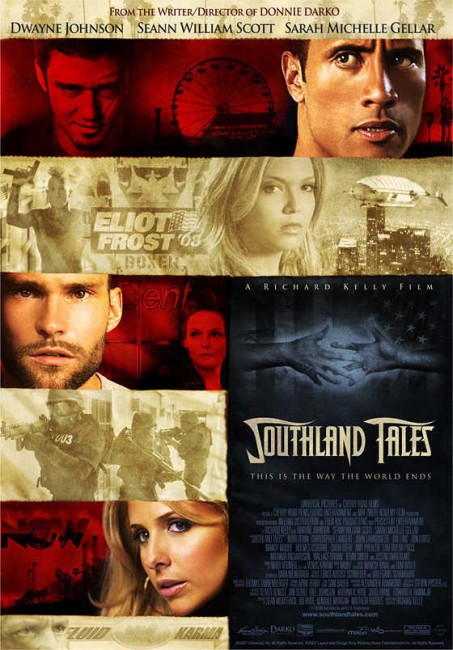 The US has collapsed into chaos following a nuclear strike in Abilene and El Paso in July of 2005. Border controls have been instituted between states and the Patriot Act has been extended to create USIdent, which monitors cyberspace. In Southland, or Los Angeles, Boxer Santaros, an action star who is married to the daughter of a local senator, has gone missing in the desert, suspected of being abducted. An amnesiac Boxer then turns up on Venice Beach and is taken in by the porn actress Krysta Now who has great ambitions, including writing a film script with Boxer entitled ‘The Power’ about the end of the world due to an environmental disaster. However, this has all been set up by the Neo-Marxist terrorists who now pair Boxer up with police officer Ronald Taverner, a Neo-Marxist plant who is impersonating his twin brother Roland, on what is theoretically a drive-around to help Boxer prepare for his role as a cop in the film. However, the Neo-Marxists have staged an elaborate set-up where Roland will appear to shoot a couple and it will be filmed to make it look like Boxer is involved in a racist killing. This goes wrong when another cop turns up and shoots the couple for real. A confused Boxer flees the scene, guided by a fan at USIdent who has read a copy of ‘The Power’ that was leaked online. At the same time, Baron Von Westphalen, a scientist who has promised Southland a supply of free energy from the process he calls Fluid Karma that harnesses the ocean waves, launches the experimental Fluid Karma-powered Mega-Zeppelin. However, Von Westphalen is manipulating events according to his own scheme, including having been responsible for Boxer’s abduction. As the Neo-Marxists converge to sabotage the Mega-Zeppelin, revelations about the cause of Boxer’s amnesia, the Taverner twins and time travel experiments all come to an apocalyptic fore.

Richard Kelly is an interesting writer-director who keeps appearing on the genre horizon. Kelly first appeared with Donnie Darko (2001), a mind-bending film about precognitive visions, time travel, sinister talking bunnies and a disturbed satire of 1980s middle-class America. I must admit I did not like Donnie Darko much – even upon multiple re-reviewing, it is still a confusing mishmash of ideas that never lead in any coherent direction. On the other hand, this overburdened conceptual stew was enough to turn Donnie Darko into a cult favourite.

Subsequently, Richard Kelly went onto script Tony Scott’s Domino (2005), a biopic of bounty hunter Domino Harvey that Kelly somehow managed to turn into a sprawlingly mad and out-of-control action film that had everything including the kitchen sink happening, even an appearance of Tom Waits as a messenger of God. Southland Tales was Kelly’s second film as director and a wildly controversial one that polarised audiences everywhere. Kelly subsequently went onto make the thoroughly confused The Box (2009) but has made nothing since that. Kelly’s company Darko Entertainment has also produced a handful of films, including I Hope They Serve Beer in Hell (2009), God Bless America (2011), Bad Words (2013), Hell Baby (2013) and Happy Birthday! (2016).

Southland Tales premiered at Cannes in 2006 but the screening reportedly had a substantial number of walkouts and was booed afterwards. For the US release in September of 2007, Kelly went back to the drawing board and cut some of the subplots, directed some new material to strengthen the narrative and added a number of special effects sequences. (It will be interesting to compare the two versions when various dvd director’s cuts and the like turn up). Kelly appears very much caught up in the vision of the future he has crafted. Indeed, the film is subtitled with various chapters, which one might notice start with Episode IV. Episodes I-III are actually available as three graphic novels – Southland Tales I: Two Roads Diverge (2006), Southland Tales II: Fingerprints (2006) and Southland Tales III: The Mechanicals (2007), which were released at intervals leading up to the film’s US premiere.

I certainly liked Southland Tales more than I did Donnie Darko. I am not entirely sure why, as both films suffer from the same problem of far too many things going on and too little overall narrative coherence. Kelly crafts a sprawling epic that grasps at a number of ideas and has the appearance of having an awful lot to say. Some of them work, some don’t. In the way that Kelly has aimed to create a complex and original vision of the future, Southland Tales reminds a good deal of Strange Days (1995), a similar work of gloomy near-future prognostication that depicted an apocalyptic Los Angeles on the verge of the millennium and likewise felt anxiety about new technologies and a racist LAPD.

Southland Tales could be a version of Strange Days that has been written after 9/11. Kelly neatly sets it just before the end of 2008 so as to fit it within the frame of the George W. Bush presidency. He grapples with all manner of contemporary issues – the ongoing disaster of the Iraq War, the public’s fascination with vapid celebrity news stories, the overdependence on energy consumption and the quest for alternate fuels, increasing concerns about privacy and surveillance, the authoritarian grasp that the introduction of the Patriot Act allowed the Bush White House, their increasing desire to exert censorship control over cyberspace and the FCC. (In a perfectly apt and ironic touch, Kelly found that he was in danger of not being able to fly to Southland Tales‘ premiere in Cannes because he had been accidentally placed on no-fly list because of the similarity of his name to someone under Homeland Security surveillance).

It is not too hard to close one’s eyes and imagine that the various characters in the film have been modelled on real-life figures – Boxer Santaros could almost be Arnold Schwarzenegger, the action star married into the political elite, while Sarah Michelle Gellar’s Krysta Now, the porn star who desires to merchandise herself in the mainstream, is not too far removed from a Paris Hilton. There are some appealingly satiric moments – like the glimpses of a current affairs tv show peopled with airhead bimbos on a Malibu beach, or an animated commercial that features SUVs fucking and a blackly funny scene where the Japanese Prime Minister (Sab Shimono)’s hand is cut off.

On the other hand, Richard Kelly writes all of his films like an ADD kid whose supply of Ritalin has been stolen. Southland Tales is constantly hopping between character streams and subplots. Kelly seems to enjoy making the plot excessively complicated. Take the Neo-Marxists’ scheme, which involves taking an amnesiac Dwayne Johnson, convincing him that he is porn star Sarah Michelle Gellar’s lover and that they have written a screenplay together, and to then fool him into a ride-around with Seann William Scott’s cop (who is initially introduced as someone who is impersonating his own twin brother and has been brainwashed into thinking he is a cop) to create an incriminating video of Johnson being present as Scott conducts a faked shooting of a mixed-race couple so as to embarrass his politician father-in-law, only for the lead terrorist to throw another cop into the mix who then shoots the couple for real.

Subsequent to this, Dwayne Johnson goes off the deep end and is contacted by an operative at USIdent (Michele Durrett) who has read a leaked draft of his screenplay and starts referring to him as the lead character – who for some reason has been named after Jericho Caine, Arnold Schwarzenegger’s character in End of Days (1999) – and later demands at gunpoint in the middle of Venice Beach that he have sex with her. In an equally bizarre move, the details of the screenplay that Boxer and Krysta have written mirror events that happen later in the film.

And then there is Baron von Westphalen (Wallace Shawn)’s impossibly complicated scheme involving a source of cheap energy derived from ocean waves that has caused the slowing of the Earth’s rotation, dead Iraqi soldiers, inside knowledge of Mandy Moore’s pregnancy and his abducting Boxer in order to shove him into an energy rift that has caused him to travel back in time. (For some reason, travelling back in time causes twins of people to appear, although surely in actuality going back one hour in time would at most cause them to witness their other selves in the hour lead up to going into the rift, not two people to run around in perpetuity). There is also something about a street drug that causes people to have hallucinations of Justin Timberlake singing about war in a videogame parlour alongside chorus girls in ill-fitting wigs. Towards the end of the film, people seem to have cryptic knowledge of events about to happen.

There is a very strange ending, which feels like something out of Repo Man (1984) and teeters somewhere between absurdity and beauty, where the two Seann William Scott’s cause an ambulance to float up into the sky where a drug-tripping Lou Taylor Pucci is handed a rocket launcher and trains it on the Mega-Zeppelin while balanced on the side of the ambulance. Kelly ends the film with most of the cast blown up aboard the Mega-Zeppelin (which was probably an easier way to bring the film to a close than figure out where all of these plot elements were going).

If nothing else, you have to complement Richard Kelly on the amazing cast he has managed to bring together, including a number of stars in roles that break with casting – Dwayne Johnson, minus his screen name of The Rock, in a parody of his usual action hero role; Buffy herself Sarah Michelle Gellar playing a porn actress; pop singer Justin Timberlake as a drug dealer; or even just Seann William Scott in a serious acting role. Not to mention all sorts of other appearances from the likes of Bai Ling (memorable as the very aptly named Serpentine), Jon Lovitz as the killer cop, Christopher Lambert as an arms dealer, Miranda Richardson, John Larroquette, Mandy Moore, Wallace Shawn, Zelda Rubinstein, as well as others like Kevin Smith and Janeane Garofalo whose appearances ended up on the cutting room floor.