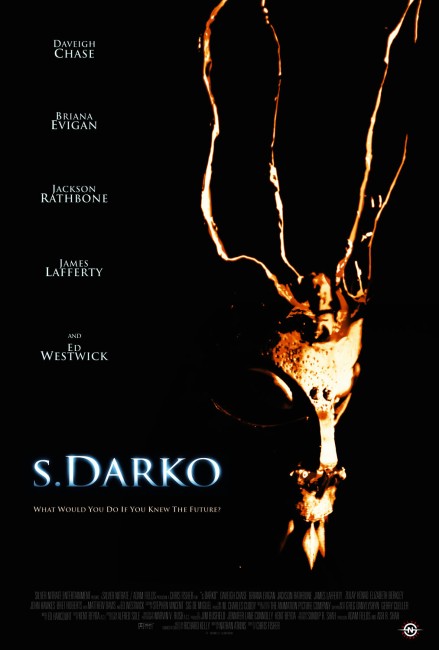 It is 1995, seven years after a mysterious falling plane engine killed Donnie Darko. His now teenage sister Samantha has left home and is travelling through the Midwest with her best friend Corey. Their car breaks down and they are forced to accept a ride into the nearest town of Conejo Springs and wait until it is repaired. They walk into the middle of the town’s troubles. Children have been going missing and the local deputy suspects the disturbed Gulf War veteran known as Iraq Jack. Iraq Jack receives a vision of a bloodied Samantha who warns him that the world will end in a matter of days. Samantha is then killed by a skidding car. Corey receives visions allowing her to wind back time so that Samantha can be saved – but at the cost of her own life. Nobody seems to heed the warnings that the town is going to be destroyed by falling tessarects in a matter of hours.

I must confess to being someone who did not like Donnie Darko (2001). It has some fine bits – a great cameo from Patrick Swayze, a darkly laced bite that dug into 1980s conservatism, and it toyed with some mind-stretching ideas – but it also has an entirely unfathomable plot. Even when director Richard Kelly explained things on the dvd’s audio track, one was no wiser about the ideas involving Tangent Universes, alternate timelines, Manipulated Dead, Living Receivers, precognitions from the future and sinister figures in bunny masks. Richard Kelly’s subsequent directorial outings, Southland Tales (2006) and The Box (2009), have similar plots that feel like they overflow with too many ideas and fail to make coherent sense. All of that said, a number of people regard Donnie Darko as a cult film and celebrate its brilliance.

S. Darko is a sequel to Donnie Darko. Whether you regard Donnie Darko as a cult film or incomprehensibly pretentious, what would be fairly much agreed is that it doesn’t need is a sequel. That does not seem to deter Chris Fisher, previously the director of two true-life serial killer films with Nightstalker (2002) and Rampage: The Hillside Strangler Murders (2006), and subsequently of the quite good psycho Samuel L. Jackson film Meeting Evil (2012). The only returnee from Donnie Darko is Daveigh Chase who played the younger sister of Jake Gyllenhaal and has now grown up as a teenager herself (where she at least gives a decent performance). S. Darko was universally hated by fans of Donnie Darko.

I am afraid to say that I failed to get S. Darko either. It proves just as baffling and cryptic as Donnie Darko. Which one supposes is at least to be complemented in that it is following on faithfully from its predecessor. On the other hand, Chris Fisher’s mood is different. There is none of the darkly satiric bite that Richard Kelly gave the original where you felt that he was launching into his own childhood with relish. Nor are there any of the wild and mind-boggling concepts that Kelly toyed with, Without either of these, that only leaves a series of strange and inexplicable happenings that seem at best to be trying to copy Donnie Darko.

As S. Darko opens, you keep trying to compare it to Donnie Darko to get a reference point on what is going on. You are looking for clues where the film is going before you realise that it doesn’t seem to have much of one itself, it is only trying to replicate the original but slightly differently. The opening with the girls on a road trip and their venture into the town is vague and meandering. Chris Fisher tries to play with some of Richard Kelly’s ideas and comes up with a mix involving Daveigh Chase being killed, Briana Evigan winding time back and having to trade her life, and a climax with the town in danger from falling tesseracts (!!!) come through a wormhole, which somehow involves Daveigh Chase being killed a second time and then going back in time to warn Iraq Jack.

The story is filled with strands that head nowhere – there is a plot about someone in the town killing children but this is soon forgotten about and never mentioned again; Jackson Rathbone is infected with a strange disease after touching the meteorite but this is of no relevance to the rest of the film. Like Donnie Darko, there is little point in trying to make sense of any of it.