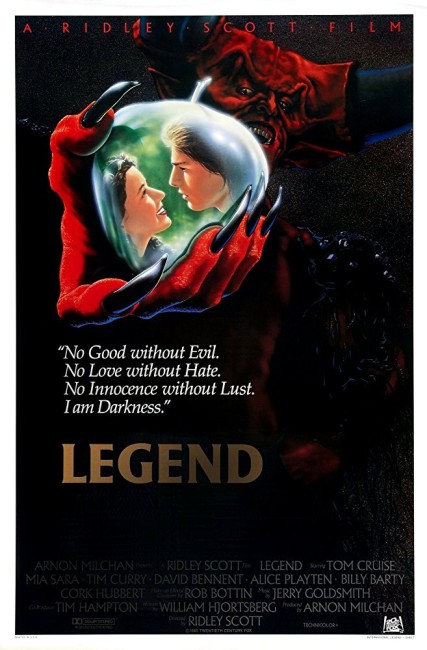 The Lord of Darkness decrees that all light shall be removed from the world. His hobgoblin minions find the perfect opportunity when the naive forest boy Jack of the Green introduces Princess Lili to the two unicorns he guards. Her virgin touch allows Darkness’s minions to kill one of the unicorns and capture the other, along with Lili. With the help of the pint-sized forest folk, a satyr and a fairy, Jack rushes to rescue Lili before Darkness can corrupt her into sacrificing the last unicorn, something that will forever plunge the world into darkness.

There was a time when Ridley Scott seemed like the Great White Hope of fantastic cinema. After making some two thousand commercials and branching out onto cinema screens with the exquisite but commercially ignored Napoleonic drama The Duellists (1977), Scott caught everybody’s attention with Alien (1979) and then followed it up with the grand slam of Blade Runner (1982). The two of these showed Ridley Scott with an instinctive grasp of science-fiction cinema and visual stylistics.

Both films were groundbreaking – Alien defined the modern monster movie and has been one of the most imitated of all genre films, while Blade Runner set the look and style of the genre that has become known as Cyberpunk. In both films, Ridley Scott directs with a densely textured lighting chiaroscuro. His films are often ones where the background and the abundance of visual detail is far more important than the characters.

Throughout these, Scott’s attention to visual detail is exceptional but often the larger picture in terms of story show him to be still a commercials director whose focus is the surface prettiness of the image. Scott’s best post-genre work is the joyously liberating Thelma and Louise and the muchly underrated Cormac McCarthy script The Counselor.

Legend was Ridley Scott’s third foray into fantastic cinema. It features the same sumptuous texturing that one has come to expect from Scott, as well all the problems of his foregoing two genre films – script difficulties, studio enforced reediting. Alas, Legend was not a success and is not a hugely well liked film. This reviewer begs consideration otherwise. No other filmmaker – excepting perhaps Adrian Lyne of 9½ Weeks (1986) and Fatal Attraction (1987) fame – ever pays as much detail to the minutiae of texture as Ridley Scott does.

Legend is an extraordinary synthesis of production design, cinematography, editing and effects. There are landscapes that are so achingly beautiful one wishes they could freeze the (cinematic) frame to keep the clarity of the image – forests designed and shot in autumnal chiaroscuros more flawless than nature ever made; frozen apocalyptic midnights that seem the perfect incarnation of a Gotterdammerung out of the Teutonic sagas; charmingly rustic Brothers Grimm forest cottages.

There is one sequence in which the film achieves one of those rare moments of pure cinematic beauty – it is the sequence that follows the fairy as she trails Mia Sara through a vast hall of shadowed pillars, closing in on her tail as the vast doors close in her face in a sudden clap of darkness; while on the other side, a mysterious high-collared black figure appears and sweeps her into its arms in a whirling, increasingly more frenetic and stylised dance, until she emerges startlingly transformed from her virginal white into a black dress and makeup; and Darkness’s final emergence from a mirror for the first time, stunningly resplendent as a classical devil figure in scarlet skin and giant ebony horns rising to meet at the top of his head. It is a breathless moment and to me will always remain one of cinema’s few opportunities to speak a unique poetry of pure visual beauty.

Ridley Scott works with a script from novelist William Hjortsberg, best known for the book Falling Angel (1978) that became the basis of Angel Heart (1987). William Hjortsberg makes some attempt to touch roots with the primality of the fairytale and bring out into the open the terrifyingly Freudian overtones that became left out after Disney cornered the market on fairytale. Legend, along with The Company of Wolves (1984) that came out around the same time, was the first time that we had seen the fairytale construed in adult terms.

It is not always a successful approach – the characters sit with a blankness where they are expected to function as archetypes but all that happens is they vanish into a murkiness of non-motivation. The reason for Legend‘s lack of success and studio reediting would seem to be that there were no precedents for this type of film. Nobody understood the idea of an adult fairytale that Ridley Scott and William Hjortsberg were trying to make. One suspects that Legend might have been a far greater success if it had been sold as an arthouse film rather than as a mainstream fantasy. Of course, 25 years later this approach to the fairytale was rediscovered with films like Red Riding Hood (2011) and Snow White and the Huntsman (2012).

Out of place in proceedings is Tom Cruise, just prior to his discovery as a teen heartthrob – ironically due to starring in Ridley Scott’s brother Tony’s massively successful Top Gun (1986). Tom Cruise’s gawkish enthusiasm and American accent tends to grate on the film’s suspension of disbelief. On the other hand, in her screen debut, Mia Sara is a radiantly lovely embodiment of purity and innocence.

David Bennent, once the kid who refused to grow up in Volker Schlondorff’s The Tin Drum (1979), stands out in with a remarkably intense delivery as the pale, sexless elf. (Where is David Bennent today?) However, everybody in the film is eclipsed by the pure theatrics of Tim Curry. Wholly unrecognisable behind the makeup, Tim Curry gives a standout performance of seductive, suasive power wherein he eschews body movement altogether, twisting traps and enticements with the power of his voice alone. The makeup work from Rob Bottin of The Thing (1982) fame on the dwarves, the goblin Meg Mucklebones and especially Tim Curry’s Darkness is utterly magnificent.

Legend exists in several different versions. European prints run to 94 minutes, however for US release, Universal demanded that the film be trimmed by five minutes and that Jerry Goldsmith’s score be redubbed with songs by Tangerine Dream. While much speculation existed for many years as to what these missing five minutes consisted of, neither print differs substantially. Mostly, the American print shortens some scenes – Jack’s admitting he took Lili to see the unicorn, the encounter with Meg Mucklebones, Darkness’s dance and seduction of Lili, and the removal of Lili’s songs. Peculiarly, all reference to Lili as a Princess is also expunged in the American print. Later US tv versions of the film also slightly differ again, most notably with the addition of a narrated opening. The 2002 DVD release offers both the US and international prints and scores for people’s view, and also includes an original thirteen minute opening sequence.