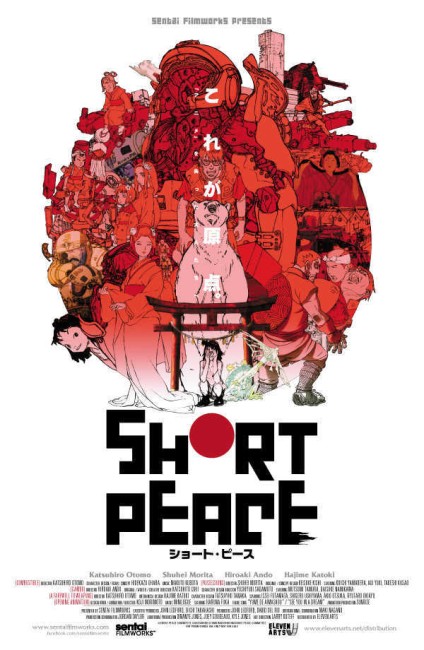 A young girl is drawn into a portal that projects her into different worlds. Possessions:– A samurai takes refuge from a storm in a hut filled with old junk that he comes across in the woods. As the various items come to life throughout the course of the night, he takes the opportunity to mend them. Combustible:– Owaka is to be married but still longs for Matsukichi, the neighbouring boy from her childhood. In upset, she tosses her fan across the room only for it to catch fire on a lantern and the fire to quickly blossom and set alight much of the city. Gambo:– Villagers have to deal with an ogre that is slaughtering their population. The emperor’s daughter runs away and encounters a menacing bear. However, the bear acts as a guardian spirit to the village and now comes to combat the ogre. A Farewell to Weapons:– A troupe of soldiers explore the ruins of a city but come up against a heavily armed robot that has been left to defend against intruders.

The anime anthology – different short pieces usually under an umbrella theme and each made by different directors – has a respected tradition in Japanese cinema. Examples of these anthologies include Neo-Tokyo (1987), Robot Carnival (1987), Love Story (1991), Memories (1995), Genius Party (2007), Genius Party Beyond (2008) and Winter Days (2013). By comparison, there is no similar equivalent in the body of English-language animation. The nearest we have is when Westerners have gone to Japan to employ local directors for a portmanteau piece with the likes of The Animatrix (2003), Batman: Gotham Knight (2008) and Halo Legends (2010).

Short Peace consists of four episodes, as well as a videogame that was released as a tie-in with the film but is not related to any of the episodes. There is also a wraparound segment that appears at the beginning but not anywhere else where a young girl is drawn into a portal in a building and flips through various alternate reality scenarios. It is these that we are led to assume are the various stories we subsequently see. The use of a rabbit that leads her into the building makes allusions to Alice in Wonderland (1865) obvious.

The first episode Possessions is from newcomer director Shuhei Morita who had previously only directed short subjects. There is a simplicity and a magic to the segment as a samurai takes refuge in a hut that is transformed as the various inanimate objects there come to life and he repairs their tattered remains. Mostly the segment operates as a dazzling series of visual patterns – a roomful of animate umbrellas, another of tessellated fabric patterns. The episode serves its time with charm and appeal. Possessions had been released as a seperate short film prior to be packaged here and was nominated for an Academy Award for Best Short Film, Animated in 2012.

The second segment Combustible comes from the most famous of the directors present, Katsuhiro Otomo, who made the highly influential Akira (1988) and has worked in various capacities as director, producer and creator on other anime works such as Roujin Z (1991), Memories, Perfect Blue (1997), Spriggan (1998), Metropolis (2001) and Steamboy (2004), among others.

This is an historical piece with no overt fantastical elements. It is also the weakest of the segments. Otomo also chooses to direct the piece as though it were a two-dimensional panel – framed in a letterbox format and with the camera moving along the horizontal axis to follow action. Unfortunately, this creates a distance that fails to bring life to the drama of the fire-fighting action or where the emotional heart of the piece should have been in getting inside Owaka’s hurt feelings.

Gambo comes from Hiroaki Ando, another newcomer. It is a fair and okay piece that works reasonably well, building to a fierce fight between bear protector and ogre.

The best of the segments is A Farewell to Arms from Hajime Katoki, who likewise is a newcomer director whose previous experience was working as a mechanical and character designer, most notably on the various incarnations of Gundam. Katoki’s background shows – where all of the other segments are either fantastical or historical, this is hard-edged military science-fiction. Katoki has a great deal of delight showing a futuristic squad moving into action – the tech and weaponry in these scenes has an impressively gritty realism. When the battle with the robot begins, the segment is exhilarating and easily the best of a show that otherwise fails to offer much in the way of standout material.