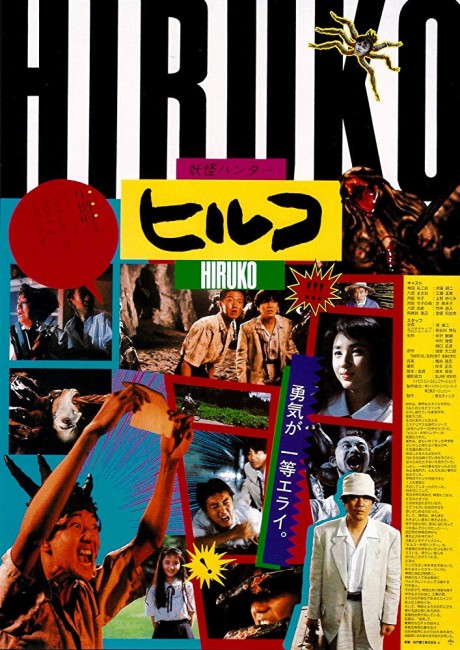 Reijiro Hieda, an archaeologist who is regarded as a crank for his pursuit of goblins, receives a letter from his old friend schoolteacher Takashi Yabe asking him to come to his school. At the same time, Yabe’s son Masao and two friends go to the school in search of Yabe and his pupil Reiko, who have both gone missing. Masao is subject to bizarre turns where his body heats up and then faces emerge imprinted in his back. As Masao’s two friends end up killed, Hieda realizes they are dealing with a Hiruko goblin that has attached the face of Reiko to its spider body. It now pursues them through the school as Hieda tries to employ his goblin-fighting equipment against it. They try to piece together the clues left by Yabe that lead to the gateway to the underworld that the Hiruko are seeking to open in order to be free once again.

Japanese director/writer and sometimes actor Shinya Tsukamoto made an extraordinary debut with the no-budget Tetsuo: The Iron Man (1989), which astounded audiences worldwide with its perverse fusion of sexual and Cyberpunk imagery. Tsukamoto went on to work his recurrent fascination with mechanical fetishism and repressions becoming manifest in other films such as Tetsuo II: Body Hammer (1992), Tokyo Fist (1995), Bullet Ballet (1998), Gemini (1999), A Snake of June (2002), Vital (2004), Haze (2005), Nightmare Detective (2006), Nightmare Detective 2 (2008), Tetsuo: The Bullet Man (2009) and Kotoko (2011). Hiruko the Goblin was Shinya Tsukamoto’s second film, made soon after the acclaim of Tetsuo. Hiruko the Goblin was not much of a success and received some negative reviews in the Western press when it came out.

In fact, Hiruko the Goblin is a perfectly enjoyable horror film. It is certainly a different film to most of Shinya Tsukamoto’s others. He abandons the wild profusion of fetishistic sexual-mechanical imagery, along with the frenzied editing schemes and ragged camerawork. In terms of technical style alone, there is nothing to Hiruko the Goblin that is different from any other horror film being made in the world around the same time. Certainly, Tsukamoto, moving from shoestring back garage filmmaking in black-and-white to colour and a reasonable budget shows himself to be adept with the medium, particularly when it comes to special effects.

Most of Shinya Tsukamoto’s other films have the sense of being like a primal scream, of protagonists crying out as they are caught between forces tearing them apart and trying to crush their personalities. By contrast, Hiruko the Goblin is an altogether lighter film. In tone, it seems somewhere between a Sam Raimi film like The Evil Dead (1981) and the giddy Hong Kong supernatural comedy of one of the Mr Vampire sequels. The comedy, with Kenji Sawada and his ghost-hunting inventions that keep failing at inconvenient moments, is somewhat uneven.

However, Tsukamoto is perfectly at home with the whacked-out imagery. There is the totally unearthly sequence where we see the girl’s head floating on the water in the middle of the lake, singing as mist drifts across her and then spider legs sprouting up out of the water and the face scuttling off into the bushes. The film reaches a point of total dementia in the scenes with Kenji Sawada and Masaki Kudou racing through the hallways of the school on a bicycle as the spider head runs along the roof behind them, before they smash through a window and the spider head escapes by sprouting wings and flying away.

There is a wonderfully demented energy and a surprisingly epic scope to the film during the ventures down into underworld. Especially good is a scene where the spider is in danger of taking Masaki Kudou over and transplants him into a dream sequence where he sees Megumi Ueno throwing ball on a family picnic on a perfect summery day, which comes contrasted with her voice on the soundtrack demanding to know if he can unlock the gateway and then ordering him to lift his chainsaw and cut his throat when he proves to be of no further use, as all the while the pastoral idyll plays out in the foreground. There is a lovely ending where we see the spirits of the dead characters emerging up out of the lake in tubes of shimmering light, just like the water creature from The Abyss (1989), and stretching all the way up into space to depart.