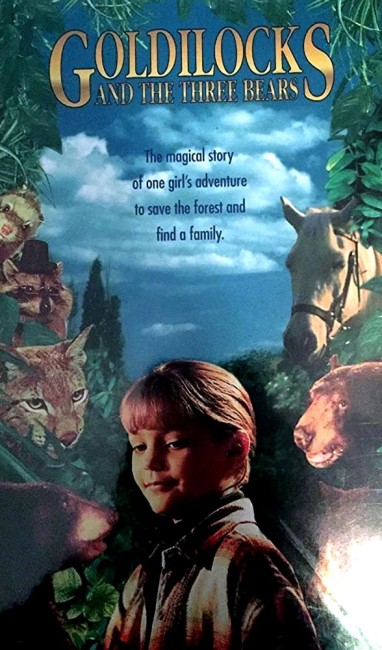 The badger Tobias Wordington settles down to tell a family of rabbits a story:– Gabrielle Lockner, nicknamed Goldi, became an orphan after the death of her parents. With great reluctance, her Uncle Hal took her from child welfare authorities to stay with him where he worked as a surveyor in the mountains. Cycling through the woods one afternoon, Goldi came upon a cottage. She entered and ate the porridge she found on the table and then went to sleep on the beds. She was startled to awake and find herself surrounded by a family of talking timber bears. However, instead of driving her away, the bears proceeded to befriend her. Uncle Hal then learned that his employer Joshua Crane, the CEO of Windtek Corporation, was planning to ruthlessly redevelop the valley and not in the ecologically environmentally friendly way that Windtek had promised the locals. His only hope to save the valley was to demonstrate that the timber bears were an endangered species. Instead, Crane responded to this by attempting to hunt the bears down.

This is a modern adaptation of the classic fairytale of Goldilocks. Goldilocks is surprisingly one fairytale that has not been adapted to the screen very often – as compared to other fairytales such as Snow White, Sleeping Beauty, Cinderella and Beauty and the Beast. This is possibly due to the logistical problems presented in creating a film with a family of bears as characters. The story of Goldilocks dates back to at least the early 19th Century, although where it originated from is unclear. In the original versions of the story however, there is no Goldilocks, the role is in fact performed by an old woman. It was only in reprints in various editions of fairytales in the mid 19th Century that the old woman was changed to a girl. Even then she was not named Goldilocks but Silver Hair, later becoming Silver Locks and finally Golden Locks.

In Goldilocks and the Three Bears, the fairytale has been put through a few modern updatings – Goldilocks now rides into the forest on her bicycle, while the bears come out with a few excruciating modern anachronisms – lines like “Yo, dude” and reference to Pearl Jam. The most radical of the updatings has been the addition of a environmentalist storyline, where the bears have become an endangered species who befriend Goldilocks and join in helping stand up against evil developers who want to despoil the valley.

Certainly, all the traditional elements of the fairytale are there – Goldilocks wanders into the forest, finds the bears’ house, tastes the various temperatures of porridge and the sizes of the various beds and so on. Surprisingly though, all of this is over within a matter of minutes. In fact, the environmentalist backstory has been used to pad out the basics of the fairytale to such an extent that the new story takes over the film entirely and renders the original fairytale largely irrelevant.

The latter half of Goldilocks and the Three Bears degenerates into much violence against slapstick villains in a clear attempt to copy Home Alone (1990), with villains variously being dumped in mud and a mine hopper, a wasp’s nest landing on their head, as well as the inevitable scene where the kid and a bear end up driving a truck together.

Disappointingly, the bears are represented by the filmmakers having filmed trained bears moving about inside a house and dubbing voices laid over the top – the results look clumsy. There is also a framing device where the story is told by a badger to a family of rabbits, where trained rabbits have similarly been placed inside a model house and given dubbed voices.