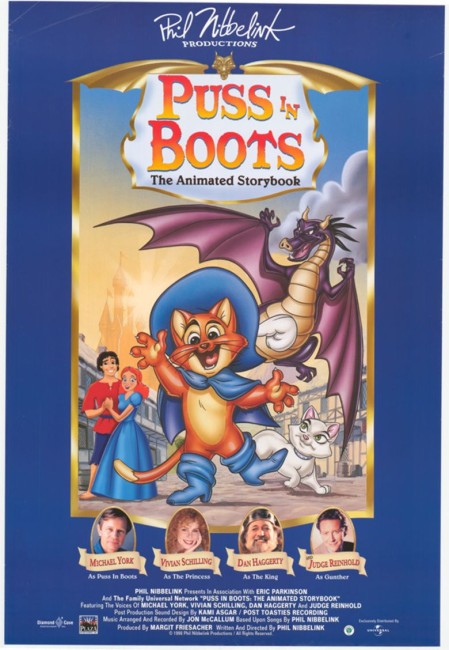 A miller dies and leaves his two eldest sons, the moronic Zeek and Zak, the mill and animals in his will. All that he leaves to his youngest son Gunther is his cat. Gunther then finds that the cat can talk. Meanwhile, the kingdom is threatened by a shape-changing Ogre that transforms into a fire-breathing dragon to terrorise the lands. The Ogre bursts into the king’s castle to demand that the Princess be his bride. Aided by Puss’s ingenuity, Gunther is able to save the Princess and temporarily despatch the Ogre. Puss then comes up with a scheme for the penniless Gunther to win the Princess for himself. Puss dresses in boots and a cape then goes and sings before the king, shouting the praises of the Marquis of Carabas. He then arranges for Gunther to be bathing in a river as the king’s coach comes by and tells the king that Gunther is the Marquis of Carabas and that all his clothes have been stolen. As they head to the Ogre’s castle for the king to give The Princess away to him in marriage, Puss tries to convince the king that the Ogre’s lands belong to Gunther/The Marquis. However, this requires Puss having to take on and defeat the Ogre.

Puss in Boots comes from animator Phil Nibbelink. Nibbelink began as an animator at Disney, working on films like The Fox and the Hound (1981), The Black Cauldron (1985) and The Great Mouse Detective (1986), before graduating to an animation supervisor on live-action films like Who Framed Roger Rabbit? (1988) and Casper (1995). Nibbelink then co-directed two animated features made by Steven Spielberg’s Amblin production company with An American Tail: Fievel Goes West (1991) and We’re Back! A Dinosaur’s Story (1993). Puss in Boots was Phil Nibbelink’s first solo directorial work. He has subsequently gone onto make Leif Erickson, Discoverer of North America (2000) and Romeo & Juliet: Sealed with a Kiss (2006), which retold Shakespeare with talking animals. None of Nibbelink’s solo films have enjoyed much notice or release.

It is clear that in creating his own production company, Phil Nibbelink has ended up making Puss in Boots with miniscule resources available to him. There are surprisingly few credits listed, far less than there are for the usual animated film, which tends to suggest that not much was available to pay for supplementary production crew. This is further evidenced by the film itself, which is shot in limited animation. Nibbelink does make up with this somewhat by the vibrancy and colour of his backgrounds, particularly during the extended journey towards the Ogre’s castle near the end.

However, in all other regards, Puss in Boots is a weak film. It features some of the dullest songs that one can ever remember seeing in an animated film – one number Why Won’t You Marry Me? consists solely of the title phrase repeated over and over. The script makes all manner of excruciating puns – about puss’s “cat-tributes” or The Ogre telling The Princess “I’ll never cheetah on you” as he transforms into one. There are groan-worthy lines like where The Ogre threatens “Boy, I will now eat you for breakfast” to which Gunther glibly replies “Wouldn’t you rather have cornflakes?” Nibbelink’s action scenes are all slapstick – very silly scenes with the dragon being battered and swung around by the vanes of the windmill. There is an even sillier sequence with Puss travelling across country at the climax, skiing down a mountainside on two fenceposts pursued by a dog (while the James Bond theme plays on the soundtrack), then using his hat as a parasail, before the dog falls through the ice and is impaled, which earns the wince-inducing pun ‘That broke the ice.”

Puss’s dialogue comes in the familiar fruity British accent of Michael York. The king, voiced by Dan Haggerty, is played entirely as a craven, high-voiced buffoon. The score is banal and frequently quotes various classical excerpts – The Ride of the Valkyries, Bach’s Toccata No 5 in D Minor and The William Tell Overture (perhaps Nibbelink’s means of cutting costs by using public domain music).