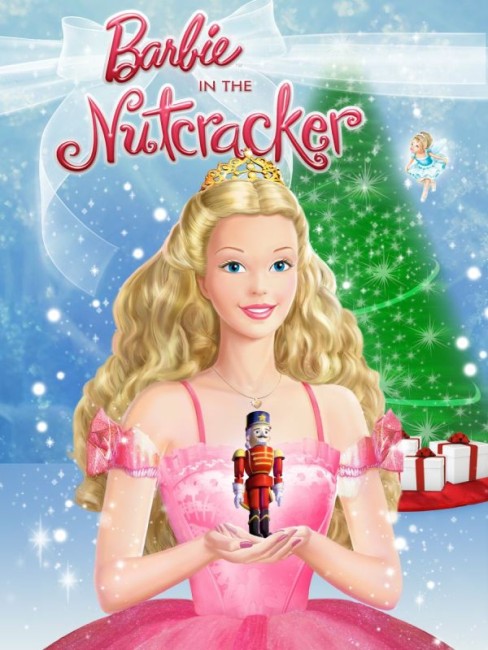 Barbie is giving ballet lessons to young Kelly. Kelly does not believe she is capable of succeeding and so to inspire her Barbie tells the story of Clara. Clara’s Aunt Elizabeth returned from abroad at Christmas, bringing Clara a toy soldier nutcracker as a present. While Clara slept, The Nutcracker came to life to defend her as the evil Mouse King and his hordes emerged from the wainscoting. When Clara intervened to save The Nutcracker from the mice, the Mouse King cast a spell that shrunk her down to toy size. The Nutcracker took Clara to the land of Parthenia in search of The Sugar Plum Fairy, the only one able to return her to normal size. However, as they travelled through the land, the Mouse King sought to stop them at every opportunity.

Several of these Barbie films have been adaptations either of classical ballets or fairytales. Barbie usually featured as a character in the present day who is narrating the story to a young girl, whereupon the bulk of the film opens up to a telling of the fairytale, which also featured Barbie as the heroine. This of course became the opportunity to feature Barbie in various costumes and accessories, which Mattel then marketed as part of the Barbie toy line.

Barbie in the Nutcracker is taken from Tchaikovsky’s ballet The Nutcracker (1892), which is in turn based on the fairytale The Nutcracker and The King of Mice (1816) by E.T.A. Hoffman. The ballet has a peculiar lack of plot, which presents some problems to the film. The essence of the original concerns Clara (whose Germanic origin has been excised by the film) who is given a toy soldier Nutcracker as a Christmas present. While Clara dreams beneath the Christmas tree, The Nutcracker comes to life to lead an army of toy soldiers that take on the evil King of Mice, who is finally defeated when Clara throws her shoe at him. She and The Nutcracker dance, he turns into a prince and takes her into the land of the Sugar Plum Fairy. Much fairy dancing ensues, before Clara wakes up under the Christmas tree with The Nutcracker toy in her arms. Mainframe has had to rearrange the story considerably to make it work as a film. In the ballet, the King of Mice is killed in the first act, but the film keeps him alive so as to act as a villain; The Nutcracker turns into the prince early in the second act of the ballet but the film keeps him from doing so until the end; while the venture into the land of the Sugar Plum Fairy has becomes more of a standard fantasy quest, set around the invented McGuffin of Clara desiring to free herself from the Mouse King’s spell and regain her normal size again.

Mainframe’s Barbie films were produced on the cheap and, as always, their characters have a certain blank plasticity and lack the three-dimensional vibrancy that the characters in other computer-animated films (ie. the works of Pixar) do. This certainly improved with the subsequent Barbie films but is less developed here. Barbie in the Nutcracker certainly aspires to an artiness. Mainframe have gone out and filmed dancers from the New York City Ballet and then directly modelled the images of the dancing fairies that appear throughout on them. There is a fluid elegance to the fight scenes, which are all beautifully drawn against lurid firelight.

On the other hand, Barbie in the Nutcracker is also a routine film. Mainframe’s Barbie films tend to be somewhat hackneyed in the story department. The plot here has Barbie go on a journey, return to confront the villain and then banally win the day by the realisation of the magic within herself. The expansion of the plot during the venture into the land of the Sugar Plum Fairy is no more than a series of generic fantasy wilderness encounters – a rock monster, fairies popping up to help Barbie for no apparent reason, a floating rock bridge sitting in the middle of nowhere.