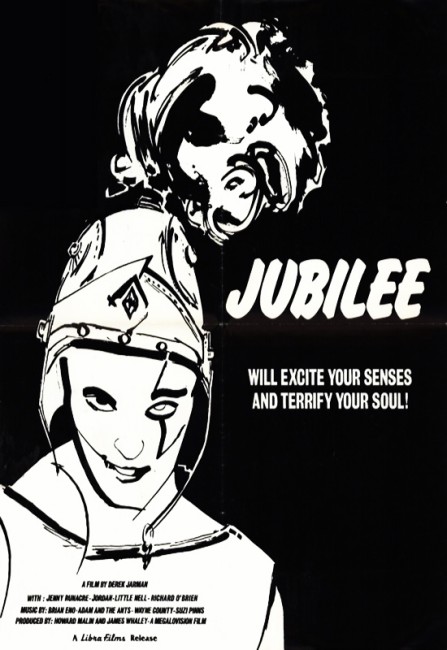 Dr John Dee, court adviser to Queen Elizabeth I, conjures forth the spirit Ariel. Ariel grants Elizabeth a vision of England’s future filled with mindless anarchy where England leads the decline of civilisation. There a group of friends engage in acts of mindless violence, including the murder of lovers and police officers. Many of these are acts staged for the record magnate Borgia Jinz who has purchased Buckingham Palace from the repossessors and turned it into a recording studio to make punk the most successful form of music in the world.

Jubilee was the second film of England’s arthouse rebel Derek Jarman. Jarman had started out as as an art director/production designer, including the amazing sets for Ken Russell’s The Devils (1971). Jarman made his directorial debut with Sebastiane (1976) about the martydom of St Sebastian, which was highly controversial at the time for its depiction of gay sexuality and had the oddity of being the only English film shot in Latin. Jarman later became famous for films like The Tempest (1979), Caravaggio (1986), Edward II (1991) and Wittgenstein (1993). Jarman, an openly gay figure and gay rights activist, died of AIDS infection, in 1994 at the age of 52.

Derek Jarman sets out to paint a picture of the future of punk England, or as punk would have it, the ‘no future at all’ of England. Jarman has assembled about him various luminaries from the British gay and punk scene, including Adam Ant, Wayne County, Ian Charleson, Jordan, even .Toyah Willcox. There are also Little Nell and Richard O’Brien – who gives the nearest thing to a professional performance in the film, his melodious quoting of cod-Shakespeare over the end credits giving the nonsense a dignity of sorts – from The Rocky Horror Picture Show (1975). (The Rocky Horror association is made pointedly obvious by Jordan’s quoting of the Rocky Horror credo “Don’t dream it, be it” during one of her rambling history lessons).

Derek Jarman’s intent was clearly to create some sort of socio-analytical time capsule from the punk era. (In a biting piece of social commentary, the film was made to coincide with Queen Elizabeth II’s Silver Jubilee celebrations). One can see what Jarman is grasping at but the actual result is far from that – a pretentious treatise that grasps at being punk but just comes out as posed. Jarman wants to say something but only produces trite and banal punk cliches – “sex is boring” or “America is dead – as a matter of fact it always was.”

There is no plot to the film – it seems to be whatever Jarman felt like filming on a particular day, be it Jordan and Toyah Willcox in boxing gloves or a dreadfully ‘meaningful’ crucifixion of Christ come orgy in an underground nightclub; a ballerina dancing around a bonfire in the streets watched by masked male nude satyr figures. It goes on and on and on until one wants to scream. Occasionally there are some images that strike with the potent anarchist ferocity of punk – the brutal beating and stabbing of a policeman; the fire-bombing of a cop’s house; burning baby carriages in the streets.

There are some minor diversions – such as a brash and impudent soundtrack, which is fairly good as punk goes, especially a recital of Rule Britannia by Jordan. Later-to-be pop singer Toyah Willcox, unrecognisable as a brattish and nasty punkette in a dyed orange crewcut, has considerable amount of fun. Some critics have found this an incredibly profound film and there was a time when it was in danger of becoming a midnight cult item.

Derek Jarman later returned to his portrait of a socially collapsing near-future in The Last of England (1987), which deals with a post-Thatcherite England.