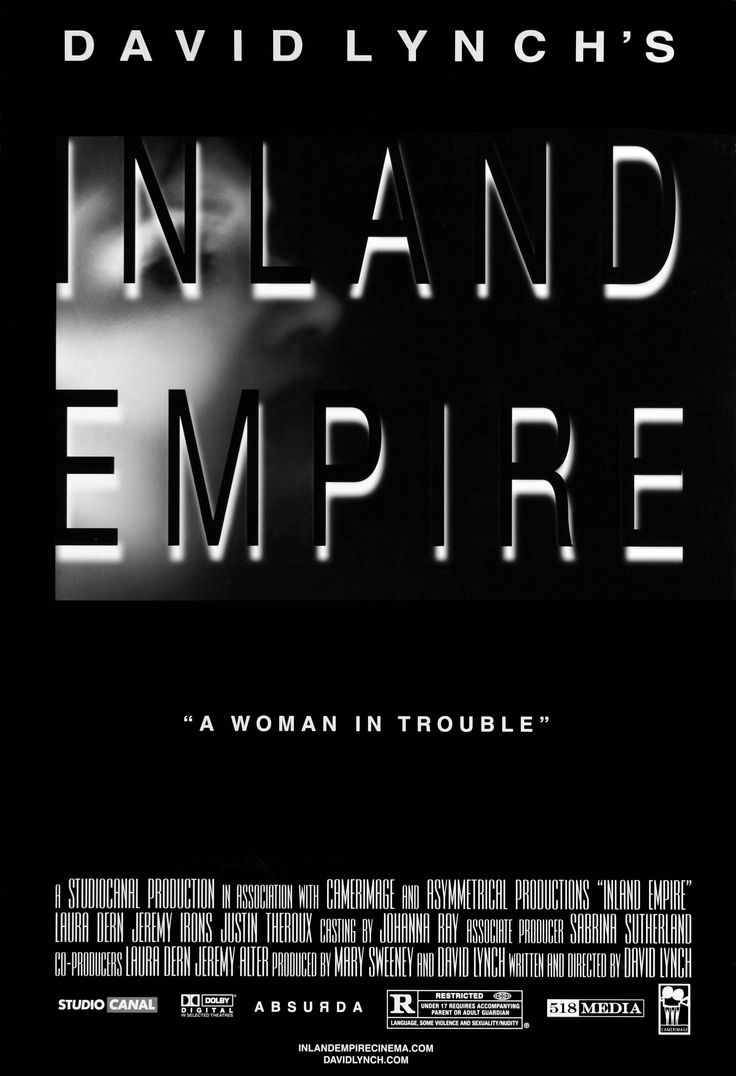 Hollywood actress Nikki Grace receives a mysterious visit from a new neighbour who predicts that the next day Nikki will get a role in a movie and that it will involve a murder. The next day Nikki receives the lead female role in the film ‘On High in Blue Tomorrow’ for director Kingsley Stewart. She is cast opposite Devon Berk who has a reputation as a lady-killer. During rehearsals, Nikki learns that the film is a remake of another production that was never completed because the two leads were murdered and that both films are based on a Polish folktale. Nikki finds herself tempted towards having an affair with Devon, despite fears of her husband who is controlling and has a reputation as a dangerous man. She also receives cryptic messages that plunge her into a labyrinth of visions and nightmares.

David Lynch is perhaps the cultiest of all cult directors. Lynch first emerged with his American Film Foundation project, the mesmerisingly surreal Eraserhead (1977), which became one of the great cult movies of all time. Lynch maintained his name with more mainstream entries such as The Elephant Man (1980) and Dune (1984). Lynch’s rise as the king of weird cinema came around the period of Blue Velvet (1986), the tv series Twin Peaks (1990-1) and its cinematically released pilot Twin Peaks (1990), and Wild at Heart (1990).

David Lynch has had a career that has always swung between extremes at a moment’s notice. Twin Peaks gained a fanatical audience, but ended up being abruptly cancelled in the middle of its second season when audience interest plunged after the revelation of the central mystery. Lynch’s film prequel Twin Peaks: Fire Walk With Me (1992) was booed at its premiere. Lynch’s subsequent films Lost Highway (1997) and the Disney-backed The Straight Story (1999) gained reasonable audiences and notices but at the same time his subsequent ventures back into television, On the Air (1992) and Hotel Room (1993), only squeezed out a total of ten episodes between them before both were cancelled.

Typical of the extremes that Lynch manages to swing between, his next film Mulholland Dr. (2001) started out as a tv pilot that was dumped uncompleted by its backers, only to be purchased back by Lynch and launched as a film project, which then received some of the best notices of his career and had Lynch nominated for a Best Director Academy Award. Swinging back to an equal extreme, Inland Empire was a project that Lynch got together by shooting on digital video in part using his own backyard and home as a location. And when released, Inland Empire received some of the most divided notices of Lynch’s career.

Eraserhead was a work that left audiences baffled and disoriented with the disquietingly intense atmosphere that David Lynch drew them into. The works that gained Lynch his cult – Blue Velvet, Twin Peaks, Wild at Heart – all embedded Lynch’s intense and unsettling weirdness within the constraints of traditional narrative – usually a thriller plot. Even by the end of Twin Peaks and its famous final episode – 50 minutes of baffling surrealism as Lynch wandered his camera through the hallways of the Black Lodge – you can see that traditional narrative was something that Lynch was itching to abandon. His next three works – Twin Peaks: Fire Walk With Me, Lost Highway and Mulholland Dr., (excepting The Straight Story) – increasingly move away from anything that resembles traditional plotting. Fire Walk With Me tells a relatively straightforward story but also has a bafflingly non-sequitir twenty minute prologue; Lost Highway tells one story concerning Bill Pullman and then inexplicably jumps tracks to another story altogether; while Mulholland Dr. creates a mystery and several strands of plot but rather than bringing them together has a twenty minute climax that is a complete scratch of the head in terms of being able to be followed. Lynch’s answer is that he makes his film in an unconscious process akin to dreaming and that even he is not always sure what they mean.

This desire upon Lynch’s part to defy expectation that a plot should have any kind of resolution or indeed should lead anywhere reaches its zenith in Inland Empire. Indeed, Inland Empire feels like the final episode of Twin Peaks having been expanded to a three-hour film. The first hour or so of running time pays some lip service to traditional narrative, albeit with several surreal digressions, as we follow Laura Dern playing an actress who is cast in a film, finds her co-star (Justin Theroux) is a notorious player and fears her temptation to him because of her never-seen husband, as well as learns that the film they are making is a remake of a previous film that was never completed because the two stars were killed. Here Inland Empire feels like an extension of the Hollywood noir that Lynch created in Mulholland Dr. – there is a similar plot in both about a blonde actress who is being followed by threatening figures and is drawn down a dream-like rabbit hole where she encounters herself in different scenarios, while both films for a time follow Justin Theroux in a parallel plot.

Despite a semi-straightforward introduction, the second two hours fragments into a narrative incomprehensibility where nothing that happens makes any kind of sense. The film opens on a girl (Karolina Grushka) sitting in front of a tv set weeping – she reappears throughout but is not connected to anything else in the film. There’s the eminently out there moment where we are granted a glimpse of what she sees – a tv sitcom enacted by people wearing rabbit heads, where their dialogue could have been taken from any standard soap opera but has oddly discordant pauses and where canned laughter comes from the background accompanying nothing in particular. (These are actually episodes of Rabbits, a web series that Lynch created at his own website, www.davidlynch.com).

There are random scenes of prostitutes in a motel room who abruptly burst into a choreographed dance and then vanish; various Polish street scenes; Laura Dern as a remote observer witnessing a barbeque attended by Polish circus performers where it appears that her husband tells her he is going to join the circus; scenes from the film that she and Justin Theroux are starring in, which blur in with Dern’s actress’s life; scenes that feel like they are from another film altogether where Dern plays a battered woman who tells her life story to a man who sits impassively at a desk; and street people who engage in a rambling discussion about the bus to Pomona as a battered Dern lies in their midst.

As Mulholland Dr. did, different parts of the plot seem to connect up with other aspects on a surreal Moebius Strip-like level – Laura Dern seems to move through time to become the person that Justin Theroux thought he saw eavesdropping on them in the soundstage during the read-through; Julia Ormond turns up at a police station and tells a detective that someone hypnotised her to kill another person “I’m going to kill this person with a screwdriver” before lifting her shirt and revealing a screwdriver plunged into her own side (which connects up and is revisited on Laura Dern at the very end of the film).

There are cameos from various well-known faces in minor roles – Laura Dern’s mother Diane Ladd appears as a tv talkshow host, Julia Ormond in the police station and then as Justin Theroux’s fictional wife, Cameron Daddo as Theroux’s agent, Stanley Kamel as a Polish circus performer, William H. Macy as an assistant director in a single shot, Mary Steenburgen and Nastassia Kinski as guests to Laura Dern’s house, and Laura Elena Harring and Naomi Watts, the two leads from Mulholland Dr., who are apparently underneath the rabbit heads.

One has no idea what is going for much of Inland Empire‘s running time. The result is akin to a cinematic equivalent of writer William S. Burroughs’ narrative experiments where he would write stories and then take scissors, cut scenes up and rearrange them in random order. The entire film was made without a script – Lynch confessed he had no idea of the eventual direction the film would go – and where he and his cast filmed what he felt liked making on any particular day. (In various promotional interviews, even Laura Dern admits she has no idea what Inland Empire was about, despite having accepted a producer role on the film). Other parts of the film, like the Rabbits episodes, have been edited in from separate self-contained shorts that Lynch made for his website. As with Burroughs books, the effect is a whole collection of random imagery that makes no sense whatsoever on a narrative level.

Even the title refers to nothing in particular – Inland Empire is an area of Southern California comprising the San Bernadino-Santa Ana-Riverside area. This is mentioned precisely once in the film, although Pomona, one of the Inland Empire locales does get a mention by the homeless people at the end. (Nor for that matter was any of the film shot in California’s Inland Empire regions).

Inland Empire also represents David Lynch’s debut as a director on digital video. He has apparently become a convert and sworn never to return to traditional film camera. This certainly leaves Lynch with a completely different looking film to anything he has made before. I had my doubts about this as the look of digital video – its flat natural lighting, its handheld ease and its graininess in cinematic blow-up – seems almost at opposite extremes of what a traditional David Lynch film is. Lynch’s films are entirely ones of artifice. They are dependent on his artful composition of lighting, sets and especially the densely layered musical soundtracks. It would be harder, for instance, to find a film that you could consider more ‘composed’ than Eraserhead.

Lynch shot much of Inland Empire himself – and could have done with a cinematographer to do the job for him – and the grainy naturalism and rough camerawork is more what you would expect of a Dogme film. Certainly, when the nightmare surrealism kicks in there are a number of moodily effective and bizarre Lynch-esque moments, although what is distinctly lacking from Inland Empire is much of the brooding and threatening mood that underlies almost all other Lynch films. The film also loses much from not having a haunting Angelo Badalamenti score present.

Some audience members and critics went so far as to call Inland Empire a masterpiece and David Lynch’s best film yet. I would be part of the equally sizeable audience that stands at the opposite extreme and calls Inland Empire Lynch’s worst film yet. You can perhaps argue for Inland Empire‘s brilliance as long as your requirement for great filmmaking is that a film need not make any kind of narrative sense whatsoever. I have no particular problem with surrealism but, as many of the directors of the French New Wave discovered, there is a thin line between creating a work that has traditional narrative-defying brilliance and one that is incomprehensible rubbish.

I think the difference for me lay in that previous David Lynch films drew one into his dark disturbing world where the narrative disjunctions had the feeling of lying just beyond the ken of sense; Inland Empire lacks the same intensity of atmosphere and feels nothing more than a collation of scenes made without any underlying rationale.

The litmus test might be if one were to remove the David Lynch name from Inland Empire, recast it with unknown faces and serve it up to audiences whether people would still be regarding it as the profound masterpiece they are calling it. Methinks not. Without the Lynch name on the credits, one suspects that Inland Empire would be seen by audiences as no more than an amateur-shot film with pretensions to artistic meaning.

David Lynch later released an entire dvd film made up of deleted scenes from Inland Empire with More Things That Happened (2007).