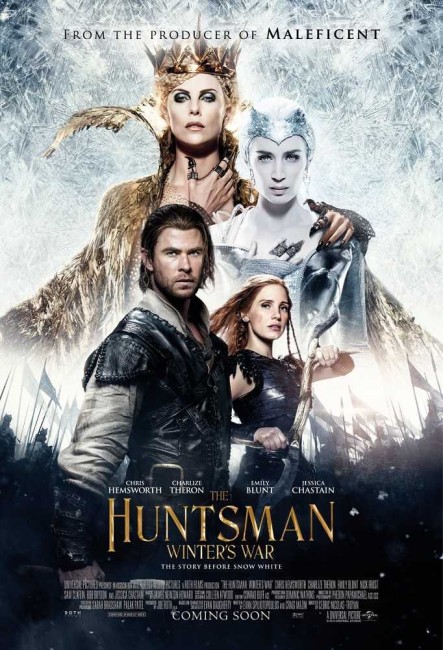 Many years prior to Snow White becoming queen, Ravenna’s sister Freya became pregnant. After she gave birth, the child was found murdered. In her grief, Freya discovered her powers as a sorceress and the ability to cast ice. She left to create her own kingdom in the north and began to conquer all nearby lands where her subjects were forbidden from loving. Among the children that she had brought to her were the young Eric and Sara who grew up as huntspeople and became skilled in combat. However, Freya then discovered they were engaged in an illicit romance and Eric watched as Freya’s soldiers killed Sara. Seven years later, Eric is now a Huntsman. He is approached by the soldiers of Queen Snow White requesting that he go and find the late Ravenna’s magic mirror. Setting out on his quest with two dwarves, he is startled to find that Sara is still alive. As they set out to face Freya, he tries to persuade Sara that he still loves her.

Snow White and the Huntsman (2012) was a big-budget attempt to rework the classic fairytale as an epic fantasy. Nobody seemed to much like the film. I found it ponderous and wholly generic in its assemblage of elements. What cannot be denied is that it was a success at the box-office and earned around $155 million in domestic gross. This is something that Universal banked on in making a sequel with The Huntsman: Winter’s War. It was intended that Winter’s War would be the first in a series of Huntsman films, however the film’s poor box-office ($48 million domestically although far more internationally) put paid to that.

The Huntsman: Winter’s War brings back Chris Hemsworth, Charlize Theron and Nick Frost but critically not Kristen Stewart. A large part of this is due to the fact that Stewart and director Rupert Sanders had a highly publicised affair during the production of the first film. You get the impression that this ended acrimoniously and either of them refused to sign onto a sequel because they were expecting or had heard that the other had. The end result is that neither returns to the show – something it should be that said actually improves the franchise straight out from the starting gate. Sanders went off to train his mediocrity on the English-language version of Ghost in the Shell (2017), a project you knew was going to suck from the moment you read any of the details about it.

I had very low expectations for The Huntsman: Winter’s War based on a trailer that seemed to push it only in terms of the CGI effects. I must say I found the film to be better than I expected it to. The new director is the French Cedric Nicolas-Troyan, who was previously a visual effects artist and had directed second unit on Snow White and the Huntsman. He was subsequently announced as one in the revolving door of directors attached to the long-touted remake of Highlander (1986) but his career seemed to nosedive with this film’s failure and he has done nothing since. On the other hand, co-writer Craig Mazin did subsequently go on to write Chernobyl (2019), the finest piece of US television of the 2010s.

For the film, the script is less drawn from Snow White than it has co-opted the basics of Hans Christian Andersen’s The Snow Queen (1846) – in fact, this holds more of The Snow Queen in it than the credited Disney animated adaptation Frozen (2013) did. Emily Blunt is another generic evil queen in the same cardboard cut-out mold that Charlize Theron played in the first film. What must also be said is that while Charlize does return, it feels like she has no place in the story. Moreover, she diverts the end of the story with her reappearance, allowing Emily Blunt, who has been painted as a cruel and tyrannical despot throughout, to undergo an appallingly cliched sentimental deathbed redemption where we are simply supposed to forget the cruelties she has committed throughout because she has a change of heart at the last minute.

Cedric Nicolas-Troyan delivers a film that feels more at home being an Epic Fantasy than Snow White and the Huntsman did. The story taps more into the mythical adventure cycle to which these films adhere. Nicolas-Troyan delivers generally far better fantasy action scenes, even if there is nothing in the film that soars with the epic regard of a Peter Jackson. The trailer made the film look like a tiresome parade of pop-up CGI magic but Nicolas-Troyan at least employs these better than it would seem. The only scene that does not work is the encounter in the woods with a troll where clearly the actors’ line of sight is not matching what is supposedly in front of them during the scene.

Chris Hemsworth and Jessica Chastain come together much better as a screen couple than Hemsworth and Kristen Stewart did. (The only thing that seems to dent their performances is the odd and distracting decision to have both play with Scottish accents). The most fun however is reserved for the dwarves with Nick Frost and in particular Sheridan Smith propping up the show with a good deal of wry banter.