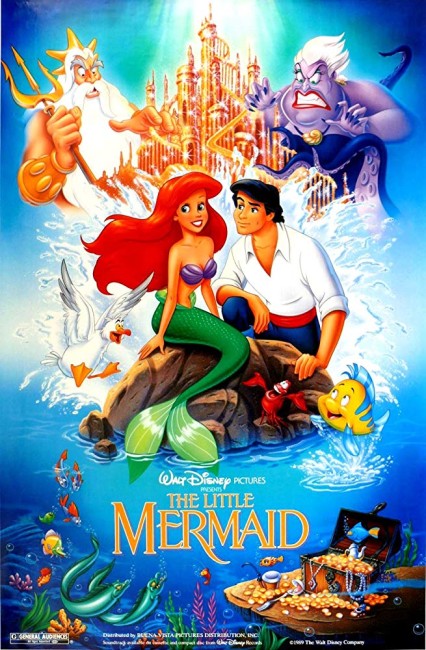 The mermaid Ariel, daughter of King Triton, is fascinated with humans. She falls in love with the human prince Eric after rescuing him from a shipwreck. Condemned by her father for engaging in illicit contact with the surface world, Ariel then receives an offer from the scheming sea witch Ursula – Ursula will turn her into a human for three days but during this time Ariel must win the kiss of true love from Eric otherwise Ursula will own her forever. Ariel agrees. However, to add to the difficulty Ursula also takes Ariel’s voice as price of the deal and then schemes to ensure that she fails.

The Little Mermaid was the beginning of the modern Disney renaissance. It was the first worthwhile animated film that Disney had released in the better part of two decades – with the exception of The Great Mouse Detective (1986), which was also co-directed by The Little Mermaid‘s John Musker and Ron Clements. The Little Mermaid proved a financial and critical success that paved the way for Disney to try much grander and more artistically epic animated films like Beauty and the Beast (1991), Aladdin (1992) and The Lion King (1994).

The Little Mermaid is not a great Disney film but it is carried by a great deal of energy and sheer good cheer. The background is drawn with a patently unreal airbrushed quality and the story is on the slight side. The subsequent films of the directing team of Musker and Clements – Aladdin, Hercules (1997) and Treasure Planet (2002) – have been disappointingly flat, but here Musker and Clements are operating at their best. A considerable amount of The Little Mermaid is driven by energetic visual slapstick – most enjoyably during the scenes with the crab Sebastian attempting to flee a French chef.

The requisite line-up of supporting talking animal sidekicks are some of the most likeable characters of any Disney film. Particularly well crafted is the character of Ariel. Making up for several decades of pallid Disney heroines like Cinderella, here was the beginnings of modern independent Disney animated heroines like Beauty, Pocahontas and Mulan. Ariel manages to balance the soft, rounded, innocent plaintiveness of the endearing Disney characters with a child-like strength to become quite memorable – you end up feeling for her plight.

Also particularly good is the Alan Menken-Howard Ashman soundtrack, which must be the most memorable and catchy of all Disney soundtracks. The calypso number Under de Sea – accompanied by the surreal images of clams being used as castanets, fish teeth as xylophones and blowfish as brass sections – proved to be an instant classic, and there is a romantic number between Ariel and Eric that is delightful.

Disney have announced a live-action remake for 2021. There have been several other versions of the Hans Christian Anderson fairytale – a Japanese animated version from 1975, a live-action Danish version from 1976 and a Russian live-action one from the same year. The late 2010s offer a plethora of other versions, although these are more films that borrow the title to tell different stories, including Little Mermaid (2016) starring Rosie Mac as a mermaid who becomes a stripper and the independent live-action film The Little Mermaid (2018) starring Poppy Drayton.