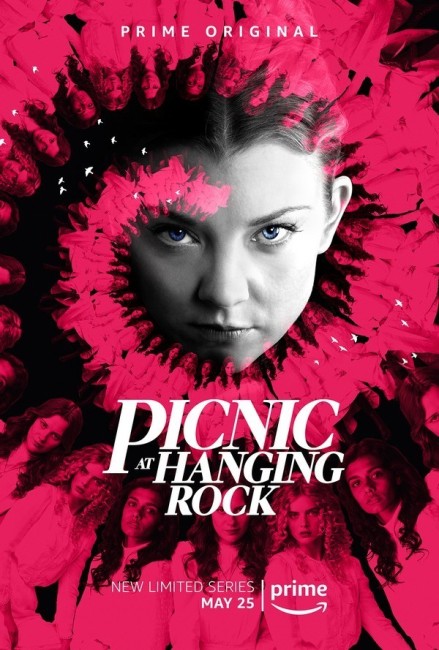 Victoria, Australia on St Valentine’s Day of 1900. A group from the school for girls run by Hester Appleyard go out for a picnic near Hanging Rock. During the picnic, four pupils and the maths teacher Miss McGraw go off to climb the rock. However, they fail to return with the exception of the youngest Sara Waybourne. An extensive search over the next few weeks fails to turn up any trace of them. Mike Fitzhubert, a local who saw the girls walking to the rock, becomes obsessed with obtaining answers and in his search eventually finds an unconscious Irma Leopold. The disappearance destroys the school’s reputation with parents removing pupils. It also threatens to expose the secrets the girls were keeping and the fact that Mrs Appleyard is not who she says she is.

The Picnic at Hanging Rock (1975) is considered one of the genuine classics of Australian cinema. Made by Peter Weir early in his career, the film gained an international reputation and its air of mystery – exactly what happened to the girls when they walked up to the rock – and deliberate refusal to provide answers created a fascinating enigma. This was boosted by a canny publicity campaign that claimed it was based on a true story. The film was adapted from a 1967 novel by Joan Lindsay. She later elaborated on the unanswered mystery in The Secret of Hanging Rock (1987), a chapter that was removed from the book at the time of original publication.

This is a tv mini-series remake that was conducted in six one-hour episodes. One’s teeth are always set on edge from the outset when someone attempts to remake a classic work. The original has so many beats and touches that are familiar to millions that any changes always have people resenting the hubris or less commonly complementing the creative talent for finding new interpretations in the material. Remakes almost always suffer from standing in the shadow of the original – there is the rare remake that catches the zeitgeist of the time that made the original a classic, most are riding on the coattails of a recognisable brand name, hoping to get audiences in the door just to see what has been done with the familiar story. The latter is exactly what I would accuse the Picnic at Hanging Rock mini-series of doing.

Things start to grate soon into Episode 1. For one, it feels like the costume designer has been allowed to get carried away and created a series of costumes that are designed entirely for how colourful and extravagant they appear to the eye rather than historical believability or what you would expect average women of the era to be wearing. The point that should be made is that the original 1975 film and Joan Lindsay’s book has no trouble in passing themselves off as based on a true story but in creating a fantasy version of turn of the 20th Century Australia, the mini-series passes from credible historical realism into something else altogether. At times, the film seems too modern – showing the teenagers talking back to the adults, which would never have been allowable back in the period, or the use of modern colloquial terms like ‘humongous’ (a word that wasn’t coined until the 1960s).

The casting has provided ample opportunity for the show to be populated by some beautiful young actresses. The major recognisable name present is Natalie Dormer, a British actress whose name has been on the rise in the last few years in tv’s Games of Thrones (2011-9) and The Hunger Games films. The role of Mrs Appleyard seems one that is more suited to a matronly figure and, though she is 36 in real-life, Dormer seems just too young and too perky to seem convincing. (By contrast in the 1975 film, Mrs Appleyard was played by 48 year-old Rachel Roberts).

The main problem with the mini-series in comparison to the original is the emphasis in the plot. The original placed the focus on the mystery and interspersed it with side-pieces of drama around the school in the aftermath of the disappearance. Certainly, the criticism you could make of the original, especially in comparison to the way the mini-series deals with it, is that the characters felt underdeveloped, at best we were shown fragments of their lives. By contrast, the mini-series blows up every single beat and creates backstories and a complex series of personal relationships among the characters that flip back and forward in time between present, past and even other countries.

The trouble with this is that The Picnic at Hanging Rock now becomes about a handful of not-so-interesting interpersonal dramas and the secrets at a girl’s boarding school with the mysterious disappearance of some of the girls as a background drama; in the 1975 film, the disappearance was the whole of the drama. The disappearance is there in the mini-series but the unexplained mystery that hung over the 1975 film is allowed to fade away to less importance than the personal dramas, even though the mini-series covers exactly the same ground as the film. (Indeed, the mini-series even incorporates material from ‘lost chapter’ to show the girls’ last moments before they disappeared). The truth is that the source material for The Picnic at Hanging Rock just doesn’t have enough there to sustain the story being told over six one-hour episodes. [Several months after Picnic at Hanging Rock aired, we had The Haunting of Hill House (2018) where similarly a book and film of equivalent length were expanded out into a mini-series of ten one-hour episodes, showing just how it could be done with completely absorbing effect].

While the mini-series does take us on the rock to just before the moment the girls disappeared, the result is kind of akin to when Steven Spielberg offered up Close Encounters of the Third Kind – The Special Edition (1980) with extra scenes of Richard Dreyfuss going inside the UFO where the general upshot was “Well this seems mildly interesting but mostly a lot of hoopla about not much” and the agreement that things worked far better when everything was left as a mystery. I expect it would be difficult for anybody coming to the story for the first time to reach the end of the mini-series puzzling over explanations for the disappearance in the same way that audiences were left buzzing by the 1975 film.

It is also that the direction just seems weird at times. The majority of the show has been shot by Larysa Kondracki, a Canadian director who had made one film with The Whistleblower (2010) and otherwise worked in television, with the second half the series is given to Amanda Brotchie who gets one episode and Michael Rymer, director of Queen of the Damned (2002) and the Battlestar Galactica (2003) mini-series (and the only of the directors who actually is an Australian) getting the last two.

In that she directs half the episodes, I will lay the blame for the weird experimentalism that takes over the show primarily at Larysa Kondracki’s door. There are times her effects just seem absurdly overwrought – when Ruby Rees tells her story of what happened in the dormitory, the rest of the girls stand around like a chorus line raising their hands in unison; images of the girls leaning over the banister echoing “Blanche” as one; the effect of all the paintings lined up on the stairs and then removed to show Inez Curro sitting glaring in the midst. Certainly, Kondracki takes the iconic image from the 1975 film of the girls in their white uniforms and straw boaters drifting through the landscape and replays it with a hyper-real beauty.

My biggest issue with the mini-series is that the story is wrenched out of shape to now gain a series of explicitly gay subtexts. It is shown that there was a triangle of thwarted affections between two of the girls and one of the teachers. Even Mike Fitzhubert and Albert Crundall are shown as having an attraction to one another. A reading of Henry James’ The Turn of the Screw (1898) – the ancestor of the modern ambiguous ghost story, which may well have influenced Joan Lindsay – is clumsily written in as an allegory for gay people of the era needing to stay closeted – “everything ends unless you stay in between.”

One wishes to raise no issue with the depiction of LGBT themes on screen. The main problem is that none of these are present in the original film or book. In other words, like the disastrous version of A Wrinkle in Time (2018), we have had a classic work that has been changed against its will to become a vehicle that addresses modern diversity concerns. I am resentful of the fact that classic works are being retconned to in effect have these issues boilerplated onto them in ways that substantially alter the original stories. Here the actual mystery is pushed aside and the mini-series wants you to accept (according to the end scenes that travel up on the rock to the moments just before the disappearance) that the disappearance was more due to the thwarted girl-girl-girl love interests and their wanting to escape than any of the paranormal explanations suggested by the original.

(Nominee for Best Cinematography at this site’s Best of 2018 Awards).