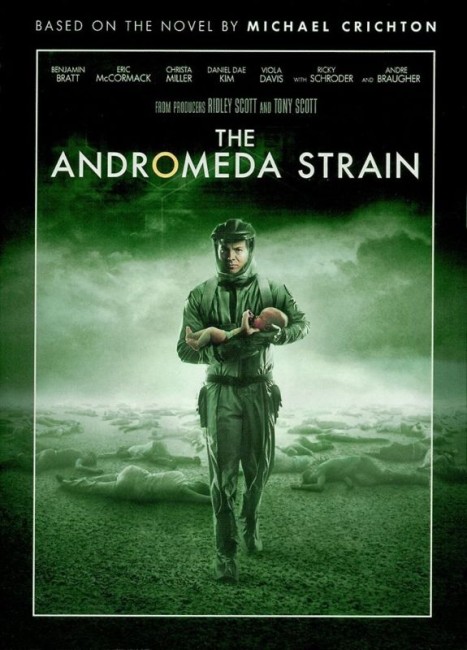 A satellite crashes outside the town of Piedmont, Utah. Two teenagers making out nearby carry it into town on the back of their pickup. A group of five epidemiological specialists are abruptly rushed to the ultra-secure Wildfire biological containment facility at a secret location in the desert. There they learn that when the satellite was opened, it unleashed a deadly virus that has killed off everybody in Piedmont. They are sent into Piedmont in vac suits to retrieve the satellite up and discover two survivors – a drunk and a baby. Back at Wildfire, all effort is made to determine the nature of Andromeda as the virus is called and how to combat it, as well as why the two survivors were unaffected. Meanwhile, reporter Jack Nash is tipped off about something hush-hush happening and is able to infiltrate the military encampment stationed near Piedmont. Covert forces within the military eliminate his leak and come after him. However, Andromeda starts spreading, carried by animals, and infects nearby towns, even causing an Air Force jet to crash and detonate a nuclear weapon in the desert. As the Wildfire team experiment on Andromeda, they realise it has the capacity to mutate and adapt to threats – moreover, that it appears to display intelligence in its actions. In attempting to determine the source of Andromeda, they realise that it was sent back from the future through a wormhole. They race against time to find a solution before Andromeda reaches California.

In recent years, Crichton attained stratospheric popularity following the success of Jurassic Park (1993), which was adapted from his book. While a couple of Crichton book adaptations were made during the 1970s, almost all of his books were adapted into films during the 1990s. This tv mini-series remake of The Andromeda Strain comes from Scott Free Productions, the production company of Ridley Scott and Tony Scott. The adaptation has been given to Mikael Salomon, best known as a cinematographer. Salomon has directed a number of works with films like A Far Off Place (1993) and Hard Rain (1998) but is usually known for his tv work with movies and mini-series such as Aftershock: Earthquake in New York (1999), Sole Survivor (2000), ‘Salem’s Lot (2004), segments of Nightmares & Dreamscapes: From the Stories of Stephen King (2006), The Lost Future (2010), Coma (2012) and Big Driver (2014).

It is doubtful that Michael Crichton would recognise what has happened to his novel on the screen. This may well be why he has taken the credit of J. Michael Crichton for the first time ever (his first name is John) – as though the extra letter prefixed to his name gives him the cloak of anonymity. The original novel and film (which was very faithful to the source, with about the only major change being to alter one of the book’s all-male Wildfire team to a woman) concerned a group of scientists working around the clock at a top-secret hi-tech facility to find a cure to a virus brought back by a NASA satellite.

The remake has been pumped up with a host of things that Michael Crichton never included, including:- a military conspiracy (although the mini-series never deigns to say what is being conspired about, it is just a generic military conspiracy) with witnesses being eliminated and the second part of the mini-series concerning an effort to hunt and eliminate one journalist. At one point, the conspiring cabal even blackmails one of the Wildfire scientists with threats against her family in order to get samples of the strain.

In the book/original film, there is only one outbreak of Andromeda – the town of Piedmont (which for some reason has been relocated from Arizona to Utah here), before the virus mutates into something harmless; whereas the mini-series has it infecting wildlife in the area, being carried to other population centres, even infecting all the foliage along the way as it heads towards California. Furthermore, the infection does not just kill people, it also causes some of them to go crazy – we even get an attack of killer birds at one point.

By far, the most bizarre additions to the story are the explanations of what Andromeda is. For Michael Crichton, Andromeda was simply a virus that had been picked up by an orbiting satellite – no more, no less. Now however, we have a stack of explanations thrown in that involve:- time travel, wormholes, possible nanotech design of the virus, it encoded with messages sent from the future, the need for ecological intervention in order to find an antidote – oh and the virus also appearing to be intelligent and able to transmit information to its distributed parts. If nothing else, you have to admire writer Robert Schenkkan’s conceptual audacity in continually piling these wild ideas on top of the original.

Of course, the era of both versions of the story has radically changed. While the military were the good guys in the 1970s, by the 00s both the military and government are treated with a great deal of distrust and suspicion and are seen to be up to no good. Everything here is also surrounded by the ever-present threat of terrorism. This comes with an amusing absurdity such as when an infected soldier crashes through a chain link fence and heads towards an encampment in a Humvee, where the immediate response of the soldiers is to regard it as a terrorist attack and start blasting the vehicle with a massive hail of artillery fire (which may well say something about how hair-trigger ready the modern US Army is). It is clearly also a post-Iraq War version of The Andromeda Strain – when Eric McCormack’s journalist goes undercover, he poses as the Iraq era buzzword of an ’embedded journalist’. (Although surely, the most credulity-defying part of the mini-series is the existence of an American tv journalist willing to go out on his own in defiance of the official military line and actually dig for the truth).

The mini-series also updates Michael Crichton’s group of scientists, replacing the book’s five anonymous white men with three men and two women, and varying the racial complement to include one Black woman and an Asian scientist, as well as including a romantic attraction between the lead male and female scientists. Intriguingly, the mini-series also varies the sexual complement to the extent of making Ricky Schroder’s soldier scientist a gay man. He gets a brief line in regard to his sexuality, “If you don’t ask, I won’t tell,” which is then ingeniously made to apply to Crichton’s Odd Man Hypothesis with Schroder commenting on how the project’s survival is ironically dependent on the very type of person the army seem the most afraid of.

The mini-series had to be updated in many ways – when Michael Crichton wrote the book in 1969, the US Center for Disease Control had only just built its first bio-containment lab, for example. The first film was founded on an absorption with the scientific process and the imagery of the vast laboratory surrounding the scientists being one that reduced them to seeming like mere germs on its antiseptic perfection. Such a visually overwhelming design scheme is missing here. Much of the fascination the science had in the original is everyday now, while the computer technology that was cutting edge in the original film is preposterously outdated.

Where the mini-series does compensate somewhat is surrounding the cast with pieces of designer tech – e-paper briefings, 3D computer displays, cellphone video data. In fact, the computer graphics people become the real stars of the remake. This does leave the script having to work harder to produce the same fascination with uncovering of the nature of Andromeda that the originals held. The other thing that is missing is the typical Crichton-esque pessimism about technology where he had the entire hi-tech system falling apart due to small things like a piece of jammed ticker tape or the design contractor failing to install a backup switch.

Where Michael Crichton’s book and the original film were driven by a scientific detective story of sorts, here that is minimised and replaced by routine thriller mechanics. The latter half of the mini-series is based around a long drawn out cross-country chase and escape from the military by Eric McCormack’s journalist; there is an entire plot that does not exist in Crichton about the military conspiracy and various inter-agency skulduggery. While many of the elements of the original remain, they are blown up – the climax of Part 1, for example, is the elaborate crashing of an Air Force fighter plane as all the plastics in the cockpit disintegrate, which was a minor part of both the originals, but now the plane also happens to be carrying a nuclear weapon that is detonated and it is revealed that the virus deliberately triggered the explosion in order to cause itself to grow and become more powerful. The climactic climb up through the laboratory’s core shaft is still there, although has been pumped up with falling debris, an entire group of people now climbing, the danger of a pool of unidentified liquid at the bottom and Benjamin Bratt having to complete the journey with Ricky Schroder’s severed thumb.

Other works adapted from Michael Crichton’s books include:- The Andromeda Strain (1971); the neurosurgical Frankenstein film The Terminal Man (1974); Jurassic Park (1993); Rising Sun (1993), an adaptation of Crichton’s blatantly racist book about Japanese business practice; Barry Levinson’s adaptation of Disclosure (1994), Crichton’s novel about sexual harassment, which contains some science-fiction elements; the lost world film Congo (1995); The Lost World: Jurassic Park (1997); Levinson’s underrated Sphere (1998) about the investigation of a crashed UFO; John McTiernan’s The 13th Warrior (1999), an historical epic about the meeting between Vikings and Neanderthals; Richard Donner’s dull adaptation of Crichton’s Timeline (2003) about time travel to Mediaeval France; plus the tv series remake of Westworld (2016– ). Michael Crichton’s films as director include:– Westworld (1973) about an android amusement park that goes amok; the medical thriller Coma (1978); The Great Train Robbery (1979) about a Victorian train heist; Looker (1981) about virtual models; Runaway (1984) about a police force to stop amok robots; and the courtroom thriller Physical Evidence (1989). Crichton also created the hit hospital drama ER (1996-2009) and wrote the original screenplay for Twister (1996) about tornado chasers.