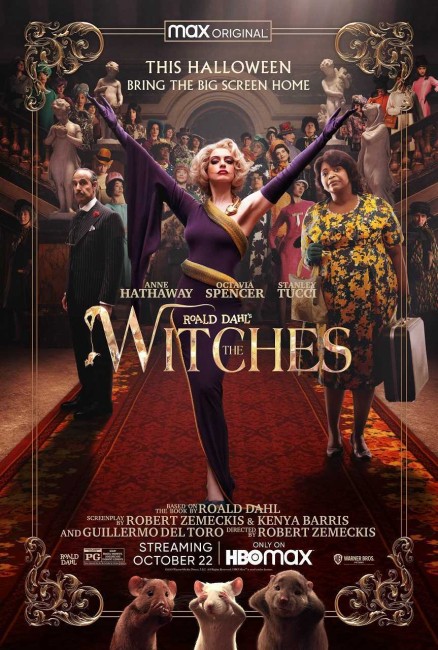 Alabama in 1968. A young boy in is adopted by his grandmother after the death of his parents in an accident. The grandmother gives him warnings about witches, which look like ordinary humans but are bald, have claws for hands and no feet. All witches hate children and regard their smell as odious. One day, the boy is approached by a witch in a store but flees from her. The grandmother decides to take them away for safety and checks into the Grand Orleans Imperial Island Hotel. There the boy enters a hall looking for somewhere to train his pet mouse Daisy. He is forced to hide underneath the dais as the ladies of the Society for Prevention to Children come in for their meeting. Watching from hiding, the boy sees the ladies remove their gloves, shoes and wigs to reveal they are witches. The Grand High Witch announces her plan to set up a series of candy stores that sell chocolates that have been dosed with a potion that turns children into mice. As the boy watches, the witches conduct a demonstration and transform his friend Bruno into a mouse. Discovered, the boy is transformed too. In mouse form, he and Bruno race through the hotel and try to find a way to stop the witches’ evil plan.

The Witches (1983) is a novel by children’s and macabre writer Roald Dahl. It underwent a film adaptation with The Witches (1990) by Nicolas Roeg starring Anjelica Huston as the Grand High Witch. This proved a highly enjoyable work capped by grotesque makeup effects creations courtesy of the Jim Henson Creature Workshop.

This is a remake from Robert Zemeckis, a top line Hollywood director ever since the popular hit of Back to the Future (1985). Zemeckis has made other classic works including Who Framed Roger Rabbit? (1988), Forrest Gump (1994), Contact (1997), Cast Away (2000) and The Polar Express (2004). (See below for Zemeckis’s other films). Throughout the 1980s, 90s and 00s, Zemeckis has been an innovator at the forefront of effects technology. Zemeckis’s films of the 2010s seemed to have gone off at a tangent – although he doesn’t leave effects technology far behind, he seems to have taken up more of an interest in true-life subject matters with the likes of Flight (2012), The Walk (2015)) and the bizarre Welcome to Marwen (2018).

You feel that with Robert Zemeckis on board adapting a work by Roald Dahl, along with Guillermo Del Toro co-writing and co-producing, as well as Kena Barris, the creator of tv’s Black-ish (2014- ) also on script and Alfonso Cuaron co-producing, the number of talents in the room should have made The Witches into a great film. Only The Witches emerges on screen as an effort that is sad to behold.

Part of this may be due to the uprooting of the original from England and relocating it in the American South in the late 1960s. Roald Dahl’s stories always inhabit a particular Britishness – of class and privilege, of children and their love of sweets, of mischief and cruelty, the cruelty of authority and of blackly funny just desserts comeuppance for the horrid and deserving. Even the very notion of the seaside hotel and rest cure seems to be absent in the American tradition. In its place, the new version transplants the story to Alabama in 1968. It seems grating the idea of Roald Dahl being relocated in Dixie amid sentimental rock‘n’roll numbers on the soundtrack – indeed, the plausibility of the film started to collapse a few scenes in with the faintly ridiculous image of Octavia Spencer trying to boogie down to The Four Tops’ Reach Out and I’ll Be There (1966) to try and cheer up Jahzir Bruno after he has just lost his parents.

I really would rather not get into the racial politics of the film as I don’t want any critical commentary to be read as intolerance on my part. I am stuck in the uncomfortable position as a white critic of trying to write about a film and the feeling that to criticise its most obvious aspect – that it swaps the races of the characters over the previous version – is to make racist comments. There is a lot to say critically about the new wave that has swept Hollywood since 2017 that pushes for greater inclusion of different ethnic faces on screen. I am stuck with the concern that anything that one says to try and examine the phenomenon is going to get pulled out of context and is labelled as racism.

On the other hand, when you have a work that remakes another and swaps the race of the protagonists to turn a blind eye or not comment on the glaring elephant in the room is something that leaves you censored from being able to voice opinion on anything. Looking at other reviewers of the film, they seem to wilfully avoid this discussion altogether, or else pass it by championing the film for its updating the story to contemporary relevance. The comment I want to be clear in all of this is – “The Witches swaps the races of its protagonists over the original; I support greater inclusion of all peoples on screen; on the other hand, The Witches doesn’t do a very good job of doing so.”

It is not so much that the raceswap doesn’t work but more that the new characters and setting almost require another interpretation. In almost any real world setting in this era, for example, an unmarried Black woman and child signing into a posh hotel would be regarded with disfavour, if not she outrightly refused service. Similarly, the idea of a Black family facing a group of predominantly white witches also begs racial readings and yet they seem ones that the film seems to require us to tune out and ignore. You have a conceptual struggle with a film that conducts raceswap as its part of contemporary calls for diversity and then demands an audience turn a blind eye to the historic realities of this. Contrast this to tv’s recent Lovecraft Country (2020- ), which delved into similar territories and revealed the harsh realities of life for African-Americans of the era with stark effect.

Even aside from that, Zemeckis misfires all the queues. The script seems to miss all the black humour and glee of a Roald Dahl story. The big dramatic scene of the original is the one where the witches reveal their faces and then find and transform the boy into a mouse. Here Zemeckis blows the scene up with to wit:- Anne Hathaway levitating through the air; throwing about and smashing furniture; blasting a subordinate to ash for asking a question; displaying a set of CGI-enhanced fangs that seem to turn her entire jaw into a shark’s mouth; and developing never-ending hands as she pursues the mice through the duct. But none of it has anything on the grotesquerie of the 1990 film where the witches removed their masks and wigs revealing hideous proboscises and the terrifying scenes where they hounded the boy and fed him the potion.

Even aside from that, Robert Zemeckis has stripped Roald Dahl and Nicolas Roeg down into no more than a series of CGI effects set-pieces – the mice fleeing through the ducts; the hero boy descending down to the balcony below in a sock to steal the potion; the mice fleeing under a bed filled with a maze of mousetraps. The most ridiculous of these scenes is a dinner party with the witches drinking the potion placed in their soup and doing mid-air flips over the table as they are transformed. Even Anne Hathaway, an actress who has done some fine work elsewhere, delivers a performance that is wildly over-the-top with a patently theatrical German accent.