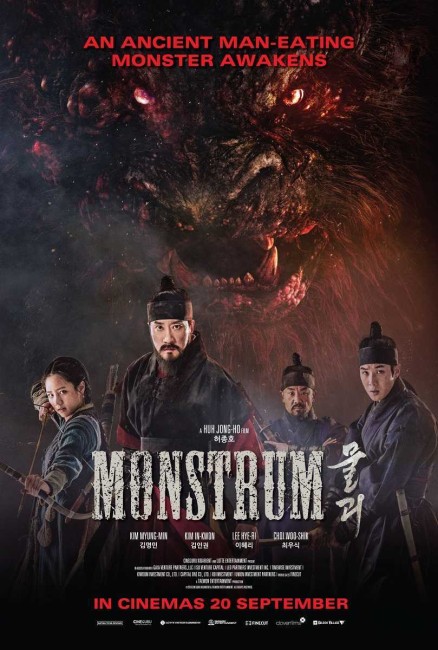 The year 1506 during Korea’s Joseon Dynasty, not long after King Jungjong has ascended to the throne. Jungjong is unpopular with some of the ministers. There are reports of a monstrum attacking Mount Ingwansam but Jungjong believes these are stories created by his traitorous ministers to sow discontent. He sends loyal swordsman Hur to find his trusted former general Yeon Geom, who is living as a peasant after being banished from the palace, and asks him to ascertain the truth about the monstrum. Yeon Geom sets out to Mount Ingwansam, accompanied by his brother Sung-han and daughter Myung who develops an attachment to Hur. Yeon Geom recruits peasants of the area to help in the search but Jin-yong, the general loyal to the treacherous Prime Minister Sim Woon, slaughters them all and claims it was the monstrum. In the midst of this, Yeon Geom and the others encounter the real monstrum and learn it was a hulking beast that was crossbred in captivity beneath the palace. It is nearly blind and a carrier of the plague. Yeon Geom and the others realise that Sim Woon is planning to lure and unleash the monstrum in the capital in order to conduct a coup against Jungjong.

Wu Xia is huge in the Chinese market. Originally developed in Hong Kong in the 1960s and taking off in a big way in the 1980s, the genre was successfully revived in Mainland China in the 2000s with films like Crouching Tiger, Hidden Dragon (2000) and Zhang Yimou’s Hero (2002), House of Flying Daggers (2004), The Monkey King (2014) and League of Gods (2016), among others. These modern films make lavish use of costuming and production design and a full array of CGI to create a unique blend of the fantastique. (For a more detailed overview of the genre see Wu Xia Cinema).

Monstrum – not to be confused with the videogame of the same name – is a South Korean attempt to copy a Wu Xia film. That ends up being not quite the case but more on that in a minute. The most noticeable thing about it is that it is not being made with the resources that the Chinese equivalents are. (South Korea has a population of only 50 million vs China’s 1.3 billion so the domestic returns on a film are just a little bit less). Also given that South Korea doesn’t have such a long history of flying swordsman films and martial arts cinema, it is not a work that comes from people adept in the form as the Chinese equivalents do – the Chinese even have action directors who specialise in just choreographing the action scenes – and so is stuck more as an entry level effort.

On the other hand, Monstrum tries something different from the usual Wu Xia film. There is no attempt to mimic the high-flying wirework and physics-defying acrobatics of the Chinese counterparts. Swordfights do occur at various points but are realistically grounded – they could without any problem be ones that take place in a regular historical drama. There is one big battle in the middle that takes place with a considerable brutality.

What Monstrum resembles is less any Wu Xia film than something like Brotherhood of the Wolf (2001), a monster film that came located in an historically grounded setting. If there is a Wu Xia equivalent you could point to, it would surely be Young Detective Dee: Rise of the Sea Dragon (2013). The film takes its time teasing the existence of the monster (called a monstrum in English language title and translation for some reason when it is just a regular monster), leaving us for a time uncertain if it is maybe not a fiction created by superstition and/or court intrigue.

The monster does finally emerge some way in to the film. It is an impressive CGI creation and its first major scene with it attacking and slaughtering most of the soldiers in the forest and with Kim Myung-Min and his party trying to escape from its lair work well. By this point any resemblance to a Wu Xia film has been dropped and the latter half of the show becomes about the monster loose in the capital and assorted pieces of in-politicking by the king’s treacherous ministers. At which Monstrum does everything okay but nothing particularly standout.

Monstrum was the third film for South Korean director Jong-ho Huh who had previously made the action film Countdown (2911) and crime film The Advocate: The Missing Body (2015).