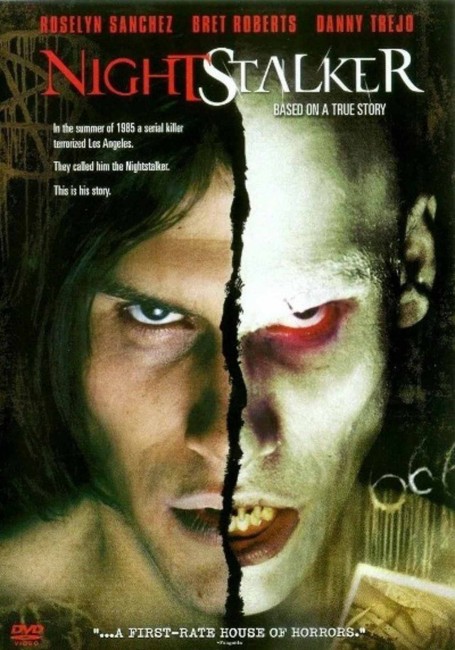 Los Angeles, 1985. The city is being terrorized by a killer that the press have nicknamed The Night Stalker. The Night Stalker breaks into the houses of Latino people and rapes and shoots women, leaving occult symbols and the name of Satan painted on the walls in blood, all the while wired on crack. Mexican patrol officer Gabrielle Martinez is the first person at the scene of one of the killings. Because of this, she is promoted to the detective squad. Once there though, she has to deal with condescending ignorance and sexual harassment from her superior officer. When she deliberately disobeys orders and leaks a sketch of the Night Stalker to a reporter, this not only has her suspended but also draws the attentions of the Night Stalker toward her.

Nightstalker – which should not be confused with the classic vampire tv movie The Night Stalker (1972) – is based on the true case of a serial killer Richard Ramirez, who stalked Los Angeles in 1985 and was nicknamed The Night Stalker by the press. Richard Ramirez was a petty thief who claimed to worship Satan, had developed a bad cocaine addiction and ate candy to such an extent that his teeth rotted. He had come from El Paso and was surviving in L.A. as a petty thief. At some point in 1985, Richard Ramirez’s interest in petty housebreaking moved over into sexual sadism and he began to kill victims. During the latter half of 1985, he stalked principally (although not exclusively) Latino neighbourhoods of Los Angeles, attacking mostly women, ranging all the way in age from 6 to their 80s, and forcing them to perform sex, sometimes to vow allegiance to Satan, before stabbing them. Ramirez was arrested after a surviving victim noted the number plate of the stolen car he was driving and fingerprints led police to him. In 1989, Ramirez was sentenced to death on 13 counts of murder and other ancillary charges and still sits on California’s Death Row as of this writing.

I was disappointed in Nightstalker. What is most disappointing is that it is not a film about The Night Stalker at all; it is more a film about a Latino woman cop trying to prove herself on the male-dominated force. Nightstalker is certainly accurate to some aspects of the character of Richard Ramirez – his eating in the victim’s homes, the way he painted Satanic symbols and made victims say they loved Satan. Where Nightstalker disappoints considerably is that it presents an entirely fictional telling of the police investigation and how Richard Ramirez was captured. In truth, Ramirez was apprehended after a member of the public recognized Ramirez’s mugshot and was caught by locals who helped overcome him while fleeing through East L.A.  neighbourhoods.

The film puts all the drama on Roselyn Sanchez’s beat cop who finds one of the victim’s bodies and is then appropriated onto the task force. The film improbably then has her inexperienced rookie make most of the deductions rather than the seasoned detectives whom the film regards as incompetent and ignorant. (It is quite possible that Gil Carrillo and Frank Salerno, the real-life detectives from the Night Stalker Task Force, would have good grounds for libel against the filmmakers, as there is no evidence in actuality for the way they are portrayed here, nor anything that suggests they treated female co-workers with impropriety).

With even greater improbability, the film then contrives scenes where heroine Roselyn Sanchez disobeys orders to release the sketch of the killer to the press which, with increasing slasher movie plotting, has her and the reporter then targeted by the Night Stalker, culminating in cliché scenes where her partner is killed and she personally apprehends the killer, not to mention where the killer gets up again after being shot. None of this happened in actuality. The sketch was released to the press by the police without any known departmental insubordination; Richard Ramirez did not harass or kill any cops or reporters; and he was never shot but instead brought to trial and sentenced to be executed, although eventually died of natural causes in 2013.

The sad truth is that, aside from the reasonably accurately portrayed scenes with Bret Roberts attacking victims, Nightstalker has precious little to do with the exploits of Richard Ramirez. It regards its own version of the events as more interesting than adherence to details of the case. Had Nightstalker done the honest thing and not billed itself as a true account of the story of Richard Ramirez and simply told the story it does, one suspects that there would be little to it as a film that would have been considered worth releasing commercially.

To stand in for the depiction of Richard Ramirez’s cocaine usage, director Chris Fisher uses frenetic sped-up rotating head effects, accompanied by loud music on the soundtrack. By about the fifth time that we see Bret Roberts driving through the streets like something out of a Prodigy video, the effect reaches the point of overkill. As a director, Chris Fisher is amateurish. He is not particularly good with the business of generating drama or handling actors, while the film looks it has been cheaply shot on video. Occasionally, Nightstalker does work despite itself. For all the repetitive pretension of the sped-up head tricks, Chris Fisher does convey a convincing sense of dementia and wildness during some of the Night Stalker scenes. There is a particularly brutal scene where Bret Roberts terrorizes and rapes one woman in front of her daughter.

The film is also aided by a strong and intelligent performance from Roselyn Sanchez, an actress worthy of greater breaks. (From 2005 on, she became a regular in tv’s Without a Trace (2002-9)]. The scenes of her dealing with the patronising attitude and sexual harassment from the fellow detectives are convincingly presented. Nightstalker is also executive produced by Latino actor Danny Trejo, who appears in many of Robert Rodriguez’s films and is the only recognizable face in the film. Trejo has a broad role, although it is at least one where he appears to be playing a good guy rather than a heavy for about the first time in his career.

A far better treatment of the Richard Ramirez story came in the document tv mini-series Night Stalker: The Hunt for a Serial Killer (2021).