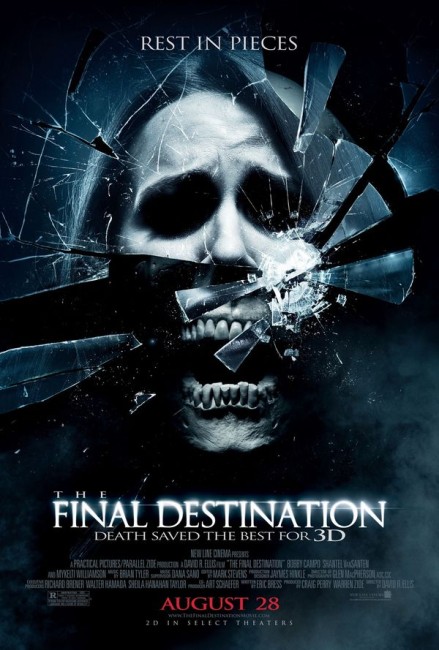 Four friends are at the McKinnon Speedway when Nick O’Bannon has a premonition of a massive pileup on the racetrack that causes exploding cars to go flying into the stands, killing dozens of people. As he sees every detail of the vision starting to happen, Nick realises that the disaster is about to occur. He is able to get his friends out of the stadium, along with several others, before the crash occurs. Not long afterwards, the survivors all begin to be killed in freakish accidents. Realising that his premonition allowed them to cheat destiny but that death is now coming for them, Nick and the others try to find a way of preventing their coming fates.

The first and third Final Destination‘s were conducted by original creators James Wong and his co-writer Glen Morgan. Final Destination 2 was the second directorial film from David R. Ellis. Ellis subsequently made the likes of Snakes on a Plane (2006), Asylum (2008), the thriller Cellular (2004) and Shark Night 3D (2011). In an odd symmetry, David R. Ellis returns here to make the other even numbered entry in the series.

The Final Destination hits into the preposterous from its opening disaster featuring various novelty deaths, including multiple bodies being sliced in two by a flying shard of metal, a girl being crushed by a thrown engine block, a character falling as a shard of broken wood is impaled through his head and out his mouth, and the final image of a couple being splattered by a tire thrown over the wall of arena after they have exited.

The parade of novelty deaths set-pieces seem even more absurd than usual: – tow truck operator Justin Welborn being dragged down the street by his own towbar as his truck slips into gear where a trail of leaking petrol is ignited by sparks from the dragging chain setting him alight and his severed head then lands outside Mykelti Williamson’s front door just as Mykelti comes out to see what is happening; Andrew Fiscella impaled through the chest by an exploding gas cylinder; Haley Webb nearly drowned when her car becomes trapped in a carwash with the sunroof stuck partly open; Nick Zano sucked down into a swimming pool outlet valve and being splattered after getting his butt stuck in the grille; Mykelti Williamson being creamed by an ambulance that abruptly appears as he is crossing the road (a scene that is almost a direct copy of Amanda Detmer’s despatch in Final Destination); while Shantel vanSanten is crushed inside the exposed innards of an escalator.

The Final Destination‘s one novelty is that it has been shot in 3-D, the new in-fad of the late 00s – thus these effects exist solely for the absurd novelty of seeing severed body parts and bloodied items shoved out of the screen. It is also clearly apparent that CGI are being used to create many of the gore effects.

The Final Destination is a film where the sole thing going for it is its serving up of entertainingly preposterous deaths. Everything else in the film feels generated by numbers and played to what one expects of the series. There is no originality, no effort and no creativity to any of it. Maybe the one cute scene is having a cinema featuring a film that is playing in 3-D being blown up, making this the peculiar novelty of being the first 3-D film to feature a film-within-a-film that is also in 3-D.

The one other novelty is that the film features not one but two precognitions of disaster, leading to a very downbeat ending. Now, would be an extremely good time to retire the Final Destination series as this entry surely shows that it is a series that is creatively dredging the bottom of the barrel. Alas for such hopes, the series continued on with Final Destination 5 (2011).