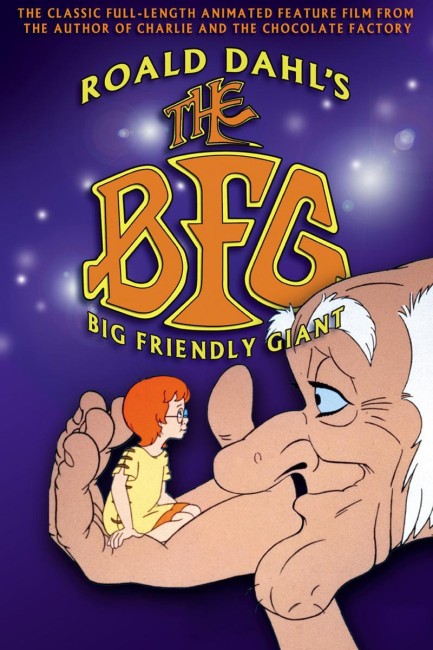 Young Sophie lives in an orphanage. Waking from her sleep one night, she is astounded to see a giant moving through the town. The giant then snatches her through the window and takes her with him back to the land of the giants in the sky. Frightened at the prospect of being eaten, she instead finds that the giant is a kindly old man. He reassures her that he is a giant who has foresworn eating people and instead lives on snozzcumbers. A relationship grows between the two of them and she names him BFG for Big Friendly Giant. He takes her with him on his job of capturing dreams and then down to Earth to place them into the minds of sleeping people. They then discover that one of the other giants has followed them down and is raiding orphanages to eat the children. The only choice is for Sophie and BFG to make an appeal to the Queen of England to stop the giants.

Roald Dahl (1916-90) was a celebrated British writer. During his writing career, Dahl turned out a great many macabre and darkly humorous short stories. These are as not as well remembered today as are his children’s books, which include the likes of The Gremlins (1943), James and the Giant Peach (1961), Charlie and the Chocolate Factory (1964), Fantastic Mr Fox (1970), Danny the Champion of the World (1975), The Witches (1983) and Matilda (1988) to name but the most famous. (See below for a list of Dahl’s screen adaptations and genre works). The BFG (1982) was another of these children’s books. The central character is named after and the book dedicated to Dahl’s granddaughter Sophie Dahl who nowadays has a modest career as a model, writer and British tv cookshow host.

Cosgrove Hall was a British animation studio, named after its founders Brian Cosgrove and Mark Hall, which started in 1976 and eventually wound up in 2008. During this time, they produced numerous animated tv series including Danger Mouse (1981-92), The Wind in the Willows (1984-7), Count Duckula (1988-93), the 2003-8 revival of Postman Pat and several tv adaptations of Terry Pratchett books.

In anticipation of Steven Spielberg’s live-action version of the story The BFG (2016), I was interested to check out the earlier film. Made just before Dahl’s death, The BFG premiered on the UK’s ITV channel, although has not been seen widely since or gained a high profile. Cosgrove Hall’s animation is plain and unpretentiously simple. Clearly, the film has been made on a lower budget and so backgrounds are often static but for the characters and elements moving in the foreground. One of the minus points is also a cheap synthesizer score of the era, which strains away with banal cues.

Despite its limitations, The BFG starts supremely well. Brian Cosgrove creates a fantastic sense of mystery and awe as Sophie looks out her window to see the giant phantom shape moving through the streets and then very mysteriously taking what looks like a yard glass and blowing glowing green mist into people’s windows. After being seen, she hides under the blankets only to be snatched up by a giant hand as she looks out whereupon the giant leaps across the landscape and then simply up into the sky towards the Moon carrying her. This creates a fascinating mysteriousness, which the film then proceeds to subvert by contrarily revealing the giant to be a fuddy old man (given a gleeful voicing from David Jason in a provincial accent amid lots of puns).

The film is sweetly engaging and Sophie’s eventual upsurge at the end heartfelt. It often feels a film that is pitched down to the single digit age groups, which is fine, although you feel that it is also a story that could easily have been sold to older audiences too. It labours under the common misapprehension that many children’s films do that children are interested in songs and so we get several of these at various interludes, most notably the extended song and nonsense frolics in the whizzpoppers scene.

There is the odd moment it drags, while the middle feels padded with ventures to the land of dreams, which is represented only by animated patterns. The film is also extremely faithful to the Roald Dahl story – about the only noticeable difference is where Cosgrove Hall have censored some of Dahl’s more bawdy humour, like how the whizzpoppers are meant to travel downwards and lift one up on farts as opposed to burps.

The film starts to win its charms with the introduction of the character of The Queen, who is given a spot-on voicing by Angela Thorne. There is a perfect drollery to the scenes of her politely dealing with the giant and then the British military wheeling into operation (even if it perhaps reveals Roald Dahl or at least Cosgrove Hall as closet monarchists, believing that all things can be solved by the benevolent order of a well-run monarchy – The Queen even being so compassionate as to offer poor homeless orphan Sophie to come and stay at Buckingham Palace. Like you could see that ever happening in the real world!). On the other hand, it makes The BFG such a distinctively British work that I wonder how well this is going to work for Steven Spielberg when it comes to his live-action remake. I am not sure I can exactly see Spielberg holding a benevolent belief in QEII or else that the story would work as effectively when she invariably gets replaced by the US President.