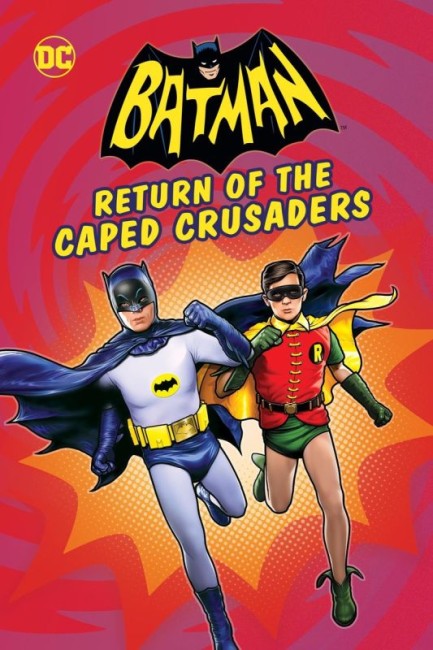 Batman and Robin go into action after The Joker, Catwoman, The Penguin and The Riddler substitute themselves for one of the acts on the popular variety tv show Gotham Palace. The villains steal the Replicate Ray, which can be used to make a copy of anything. Batman and Robin pursue the villains up to a space station to stop their scheme to use the ray to make duplicates of The Earth, one for each of them, and make an arrest. Fighting against his attraction to Catwoman, Batman becomes affected by the ‘batnip’ that she scratches him with. Under its influence, he turns bad, kicking Dick and Alfred out of Wayne Mansion and using the Replicate Ray to make copies of himself to take over the police force, the mayor’s office and run all of Gotham City. The only way to stop him is for Robin and Catwoman to team up and release all of the villains from jail to take on the Batman copies.

Make no arguments about it, Batman: Return of the Caped Crusaders is a stunt film. 2016 was a year filled with Batman mania – on the big screen was the high-profile Batman V Superman: Dawn of Justice (2016); on television screens, the prequel series Gotham (2014-9) was doing strong in its third season; and the dvd screen offers no less than two other animated Batman films with Batman: The Killing Joke (2016) and Batman: Bad Blood (2016). Someone somewhere realised that Adam West and Burt Ward, the Batman and Robin from the tv series Batman (1966-8), were still around, albeit well past retirement age, and came up with the idea of throwing them back together in a movie. Amid 2016’s proliferation of Batman offerings, Batman: Return of the Caped Crusaders is unquestionably the most off the wall offering.

The screen Batman has changed a whole lot since 1966. Back then, nobody took comic-books seriously and so the producers played the show up as a giddy, wilfully absurd pop artifact that tried to be as silly as it could. Even as comic-book purists quailed, the public lapped it up and this campy approach dominated comic-book screen adaptations for the next decade. Around the mid-1980s, the comic-book began to become more psychologically-driven and serious as it rebranded itself as the graphic novel, during which Batman emerged as far more grim and dark in nature. The cinematic Batman followed not long after with the Tim Burton Batman (1989) and that approach has largely dominated comic-book adaptations until the present-day.

Amid the prevailing outlook on Batman, something that seeks to go back and replicate the wilful silliness of the 1960s tv series seems utterly bizarre. Return of the Caped Crusaders goes so far as to reproduce the look of the characters, the look of the 1960s Batmobile, the costumes of the villains, the look of the Batcave and so on. We even get appearances of supporting characters such as Aunt Harriet and Chief O’Hara that were introduced in the tv series but did not appear in the comics.

There are all the idiosyncratic stylistic touches from the tv series – the onomatopoeiac comic-book balloons that pop up in the middle of fight scenes; the habit of prefixing every device with the term ‘bat- ‘; the scenes of them climbing up the wall sideways; Robin’s florid exclamations of “Holy Faster Pussycat, Kill, Kill”, “Holy noxious gas,” “Holy dragnet” and the like. Batman gives absurd moral lectures about the necessity of stopping at a sidewalk crossing in the middle of a pursuit and reprimanding Commissioner Gordon for watching tv instead of working.

There are even cute in-jokes – when Batman is knocked over the head, he sees three different versions of Catwoman (an in-joke reference to the fact that three different actresses played the part during the course of the series); and when it comes to the prison breakout at the end, we get a cameo from just about every other guest villain that was introduced in the series such as Egghead, King Tut, Mad Hatter, Mr Freeze and others. The film makes a point of letting us know this is a retro work – when they use the Bat Computer, replete with punch cards, Batman states: “this computer has the information of two encyclopaedias.”

Adam West and Burt Ward are back on board as Batman and Robin. West is 87 years old and Burt Ward is still playing the role of the adolescent Boy Wonder at the age of 71. The inescapable downside of this is that their voices are clearly those of old men and just don’t suit the roles any longer. The most jarring is when 83 year-old Julie Newmar steps back into the role of Catwoman where she just doesn’t have the voice that can do sultry and seductive anymore.

The homage is cute and affectionate. At the same time, it brings back memories of just how silly the original tv series was and how much it treated the original comic-books as a bad joke. As a result, it leaves you in two minds about whether you should applaud the film for the cleverness of its replication of the old show’s style or repudiate it for the continued trashing of the source material. The film certainly takes many elements of the tv series into different places. The bad Batman plot that takes over in the second half has much potential. I also liked the idea that Catwoman was brought much more to the fore and the attraction between her and Batman played up more than the tv series ever did. Eventually, the film does work on you with quite amiable results. But what an oddity it is.