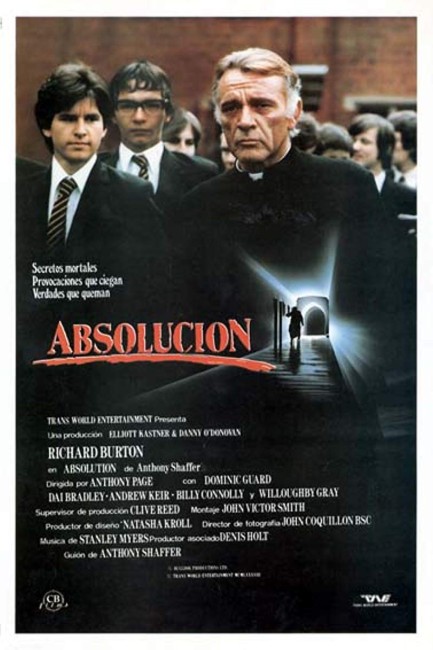 At a Catholic boy’s boarding school, Benjie Stanfield is angry when the Latin master Father Goddard forbids him from seeing Blakey, a wanderer living in the woods that he has befriended. Blakey comes up with the idea that Benjie should take revenge by confessing an outrageous sin to Goddard and then sit back knowing that there is nothing that Goddard can do about it because he cannot violate the confidentiality of the confessional. And so Benjie goes to Goddard and confesses to bashing Blakey’s head in with a stone. Goddard rushes to find the body only to discover that Benjie has planted a scarecrow and all the boys are waiting and start laughing. Benjie then returns to Goddard and says that he really did kill Blakey and persuades him to view the real body. Benjie continues to taunt Goddard by then promising to kill the crippled Arthur Dyson.

Absolution is an interestingly obscure psycho-thriller. The film was made in 1979 but for reasons unknown – one suspects controversy of religious themes – it lay shelved until 1981 where it was given a minimal British release. It was not released in the US until 1988 where the only ripple it caused was the opportunity to see one of the great unseen performances of the by then late Richard Burton.

Absolution was written by playwright Anthony Shaffer who also authored screenplays such as Sleuth (1972) and The Wicker Man (1973) and is directed by former stage director Anthony Page, who had made films like I Never Promised You a Rose Garden (1977) and the remake of The Lady Vanishes (1979). Considering the stage backgrounds of its two principal creative talents, it is no surprise that Absolution could almost be a play – it is structured with a series of lengthy self-contained scenes that each dramatically build out of the preceding one.

The film takes its time – Anthony Page crafts characters with fine shadings, perfectly capturing the innate nastiness, banality and petty authority of a British boarding school. The games eventually develop with some considerable psychological tension. Absolution is certainly a classically studied piece, more a film for the Merchant Ivory-David Lean crowd than any easy multiplex/video sell. Certainly, once it gets conclusively into psycho territory, it becomes increasingly schlockier. The twist ending, which holds a nastily contrived fate for Richard Burton and his Catholic faith, is a considerable surprise.