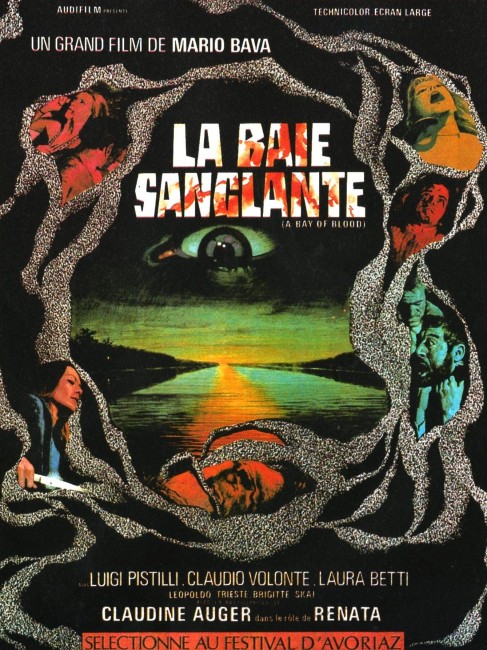 The Countess Federica Donati is garrotted in her home and a note left to make it seem like a suicide. Various people, including relatives, her illegitimate son and a buyer who wants to develop the bay she owned, arrive at the house seeking control of her estate. As the conflicts between the various parties come to the fore, people start to be brutally murdered.

Director Mario Bava is one of the legendary names in Italian fantastic and in particular horror cinema. Bava’s Black Sunday (1960) created the genre of the continental Gothic horror film during the 1960s, while his Blood and Black Lace (1964) essentially created the subgenre of the Italian giallo psycho-thriller. (See below for Mario Bava’s other genre films).

Twitch of the Death Nerve, also known under a host of alternate English-language retitlings, including at one point being passed off as a sequel to The Last House on the Left (1972), is often cited as being the first slasher film. It premiered the slasher movie staples of people in a remote setting being butchered in novel ways and of a plot streamlined to maximise the number of such set-pieces.

Mario Bava sets up some stylish and imaginative set-pieces throughout. There is a captivating opening scene. An old lady in a wheelchair (Isa Miranda) moves through her house. Bava focuses on the lushness of the rich red drapery surrounding her while gentle piano music swells on the soundtrack, only for a noose to be thrown around her neck and the wheelchair kicked away and she left gasping as the wheels of the chair still spin. However, the sequence doesn’t end there as the killer is then stabbed by another person.

Elsewhere, there is a great scene where Brigitte Skay runs towards the lodge in a wet dress and the killer comes up behind and whacks her in the side of the neck with a machete. It is a scene that holds a considerable kick, none the more so for the full-frontal gore that Bava is prepared to throw at us, letting use see the machete buried all the way in the neck.

Later there are shots of Roberto Bonanni getting a machete in the face; of Laura Betti having her head severed; Claudio Volonte having a spear thrown at them and being impaled to a tree. There is a particular imaginative sequence where two lovers are impaled in the midst of sex with a spear right through their bodies and the bed underneath them – a set-piece that, to confirm Twitch of the Death Nerve‘s influence on the slasher film, was later borrowed by Friday the 13th Part 2 (1981).

Being a former cinematographer, Bava makes a beautifully photographed film, filled with some exquisite shots of the bay and sunsets. On the minus side, much of the film is shot at night in seemingly natural lighting where it is difficult to see what is happening while watching the film on the small screen. Bava also characteristically over-indulges in the use of zooms, which is surely the cinematic equivalent of putting multiple exclamations points (!!!!!) in a sentence.

Unlike a standard slasher movie, Bava takes a long time building up to the main action, spending too much time on the one-dimensional characters, especially the kids partying at the start. The dramas involving these people are dull as, very much akin the slasher movie, Twitch of the Death Nerve does little to establish them as being of any depth to care about.

There is not much plot to Twitch of the Death Nerve, it largely having been streamlined around the murder set-pieces. By the end, the film does gain a certain degree of black humour in the various twists where everybody keeps killing everybody else off. It reaches a bizarrely abrupt ending, where two kids shoot the remaining two survivors, by which time you can see that Mario Bava’s tongue is now entirely planted in his cheek.

Mario Bava’s other genre films are:- uncredited co-direction of Riccardo Freda’s I Vampiri (1957) and Caltiki the Immortal Monster (1959); the Gothic classic Black Sunday/The Mask of the Demon/The Revenge of the Vampire Woman (1960); the Greek muscleman fantasy Hercules in the Center of the Earth/Hercules vs the Vampires (1961); the giallo The Evil Eye (1962); the Gothic horror anthology Black Sabbath (1963); the Gothic horror Night is the Phantom/The Whip and the Body/What? (1963); the giallo Blood and Black Lace (1964) the Gothic Kill Baby … Kill/Curse of the Dead/Curse of the Living Dead/Operation Fear (1965); the sf/horror film Planet of the Vampires (1965); the spy comedy Dr Goldfoot and the Girls Bombs (1966), Bava’s worst film; the masked super-thief film Danger Diabolik (1967); the giallo Five Dolls for an August Moon (1970); the giallo Hatchet for a Honeymoon/Blood Brides (1971); the Gothic Baron Blood (1972); the giallo/haunted house film Lisa and the Devil/House of Exorcism (1972); and the possession film Schock/Beyond the Door II (1977).