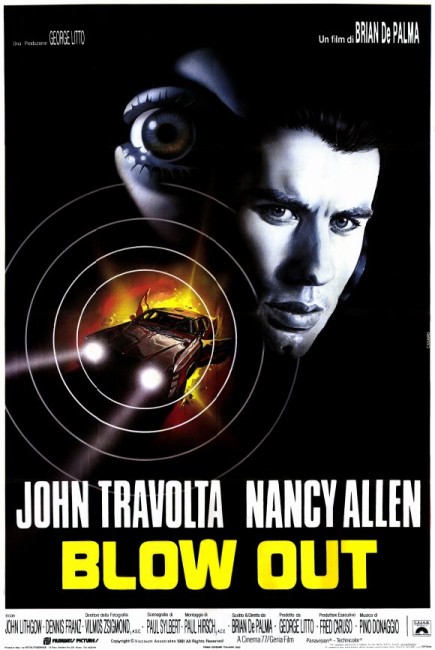 Film sound effects man Jack Terri goes out to a lonely bridge one night to tape some natural sounds. He sees a car go off the side of the bridge and dives in to rescue the female passenger, although is not able to save the driver. Later he learns that the driver was a senator, a prime candidate for the next Presidency, and that the girl Sally Bedina was a hooker. Replaying his tapes, Jack deduces that the car’s tire was shot out and realizes that the accident was in fact a planned assassination. When Jack tries to get people to believe his story, a hired killer is sent to eliminate he, the tapes and the girl.

Brian De Palma is one genre contributor about whom reviewers are highly divided. Praising Brian De Palma for his not inconsiderable directorial dazzle and stylishness also has to sit alongside accepting De Palma’s frequent derivativeness (notably of Hitchcock) and a definite misogynistic undertow. De Palma first drew attention with the psycho-thriller Sisters (1973) and continued to draw accolades with the genre parody The Phantom of the Paradise (1974) and the Stephen King adaptation Carrie (1976), but started to slip into stylistic empty-headedness with the silly Vertigo (1958) rehash Obsession (1976) and the terminally confused The Fury (1978).

De Palma next ventured into a string of psycho-sexual thrillers with Dressed to Kill (1980), Blow Out and Body Double (1984), which drew a storm of outraged feminist protest against De Palma. It may have been this that caused De Palma to subsequently abandon the horror/psycho-thriller genre altogether, with occasional sporadic returns such as Raising Cain (1992), Femme Fatale (2002), The Black Dahlia (2006) and Passion (2012).

The similarity of titles between Blow Out and Michaelangelo Antonioni’s Blow Up (1966) – a film that featured David Hemmings as a photographer obsessively poring over blow-ups of a photograph that seemed to reveal a murder – is not coincidental, for Blow Out is another of Brian De Palma’s homage movies. In other places, De Palma copies almost scene-for-scene from Francis Ford Coppola’s The Conversation (1974). He himself claims he took inspiration from a fascination with political incidents like the JFK assassination and Chappaquiddick.

Nevertheless, Blow Out is a fascinating film. It is certainly Brian De Palma’s darkest work. It holds a cynicism about the genre that De Palma is working in – you sense De Palma was tiring of the psycho-thriller (and indeed his next genre film Body Double would be his parting with the genre for some time). De Palma parodies the famous shot at the start of Halloween (1978), opening on a continuous killer’s eye point-of-view-shot that goes on for several minutes following a slasher around a dormitory brimming over with girls in a state of undress – but in a familiar De Palma-esque reality twister this is then revealed to be a film-within-a-film called Co-ed Frenzy. It is clearly Brian De Palma sending up the excesses of Friday the 13th (1980) and imitators. There is an amazingly bleak and cynical ending wherein Nancy Allen’s dying screams are used to perfect the scream that John Travolta is looking for for the slasher movie soundtrack.

De Palma clearly has scathing regard for the slasher cycle. Part of this may well be because Dressed to Kill came out at the same time as Friday the 13th and was lumped together as part of the same sadistic/misogynistic parcel by some of the more extreme critics, despite the immense differences in quality. De Palma is clearly slamming slasher films for promoting sex and sadism, while the end pointedly paints them as exploitative of real human suffering. De Palma ends up siding with those who attacked Dressed to Kill, although when you see De Palma’s trashy Body Double, made three years later, which does pander to the exact same elements being parodied here, you wonder if De Palma was aware of the irony and failed to see that much of this applied to his own work too.

Stylistically, De Palma shows off and Blow Out contains some of his most directorially impressive set-pieces. Vilmos Zsigmond’s photography, all filled with striking contrasts between fore- and background, has a shimmeringly hallucinatory hyper-real quality to it – there is a stunning sequence with John Travolta on a bridge with a directional microphone where the camera pans away to focus on the source of the natural sounds he picks up, each coming in exquisite crystal-clear vignettes. There is an equally stunning sequence later on as John Travolta pieces the assassination together with De Palma cutting back to visual interpretation of each sound in flashback. John Lithgow’s elimination trail and the big climactic set-piece of a hunt amidst a Liberty parade are all dazzling set-pieces too.

John Travolta gives his second performance for Brian De Palma (his first was Carrie). This was the period before Travolta revived his career and was still trying to shuck teen heartthrob roles – Quentin Tarantino, who gave Travolta his big career revival in the 1990s, cites Blow Out as his favourite John Travolta film. Nancy Allen gives her third performance for De Palma following Carrie and Dressed to Kill but her vacant Barbie-doll bubblehead character (a role that would have been perfect for Melanie Griffith in Body Double mode) is one of the film’s minus points.