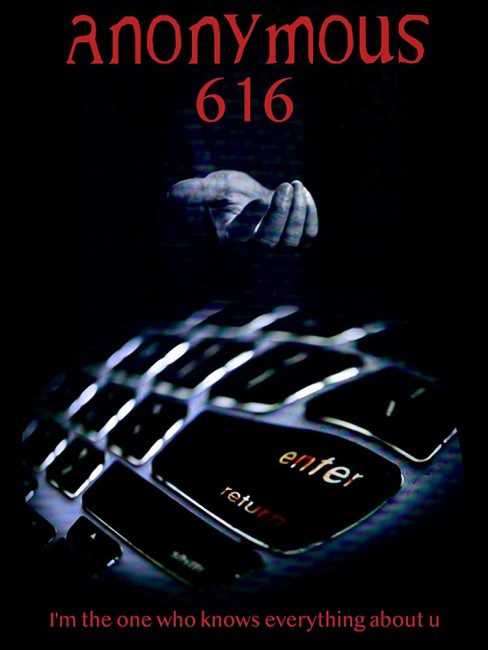 Jason has just returned from a tour of duty in Iraq. He and his girlfriend Jenna are invited over for the evening by his old friend Eric and his girlfriend Monica. As they sit and talk, Jason wanders into Eric’s computer room. On the computer screen, an instant messenger contact Anonymous 616 appears, telling Jason that he knows everything about him, including all his deepest secrets. Anonymous 616 suggests that Jason can have godlike powers and urges him to give into his repressed desires, including making the moves on Monica’s underage daughter Emily. Anonymous 616 then pushes Jason to confront Eric over the way he treats him and the fact he secretly slept with Jenna. As both Eric and Jenna deny this, Jason begins to exercise his godlike powers and the situation explodes into violence.

Anonymous 616 was the first film from Mike Boss. Born in Canada, Boss was raised in Switzerland where he became a male model. He moved to Hollywood where he tried to make it as an actor, mostly only getting parts as an extra. Boss funded Anonymous 616 himself and made his directorial debut with it. Elsewhere, Boss has also made the 36 minute short film The Great Awakening: Breaking the Chain of the Democratic Party (2019) about the campaign led by Brandon Straka that claimed that youth was walking away from the Democratic Party en masse (something that was later revealed as an astroturf campaign) and the upcoming dramatic film A House Divided: A Mega Maga Movie (2020).

Anyone who comes out as a MAGA supporter and/or makes works supporting their causes automatically gets points subtracted by me right out of the starting gate. Leery of this, I sat down to watch Anonymous 616, There are some speeches that put one’s hackles up during the early sections where soldier Daniel DeWeldon talks about his time in service in Iraq, fighting for freedom against evil freedom-hating caliphate-supporting terrorists. (I was willing to give the film a certain amount of leeway and regard this as just one character’s point-of-view. The waters certainly get muddied later in the show when we see that said character is suffering guilt at having deliberately shot an Iraqi civilian in cold blood).

And yet for all that you watch the film with hackles raised, you have to admit it does get interesting when Daniel DeWeldon sits down at the computer and the titular user starts talking to him, hinting that it knows all his secrets and encouraging him to give in to his deepest urges. The idea of a seemingly godlike user on computer messenger is an intriguing one, even if one’s teeth keep gritting about the idea of said godlike user choosing to communicate in textspeak – ‘u’ for you, ‘b4’ for before etc.

Anonymous 616 soon starts to get into fairly whacked territory when the user on the other end of the computer starts prompting Daniel DeWeldon to unleash his desires and we next see him making moves on his friend’s underage daughter (Bella Shepard). Things get progressively more extreme with DeWeldon nailgun crucifying his friend David Abramsky to the wall and later bashing his head in, raping his wife (Lena Roma), as all the while he accuses his girlfriend (Mike Boss’s own wife Jessica) of sleeping with Abramsky (though both confess to doing so under threat, we are never sure if they actually did or not), and finally to devour the virgin heart of Bella Shepard so that he might gain full godlike powers.

This is a film that heads full-on into some fairly perverse territory if not disturbed mental space. For which it must be commended. I was interested to see where all of this was going, especially the idea of the godlike being on the internet prompting Daniel DeWeldon to do these things.

The eventual disappointment of the film is that it [PLOT SPOILERS] opts for the hackneyed twist of pulling back to show that everything that just transpired happened inside Daniel DeWeldon’s head. It’s a twist that has been done better by other films ranging from The Cabinet of Dr Caligari (1919) to Shutter Island (2010). Moreover, the ending suddenly goes left field and seemingly turns into a faith-centred morality play with the appearance of a pastor (Myles Cranford) who pronounces divine judgement and damnation on Daniel DeWeldon for what he has done.