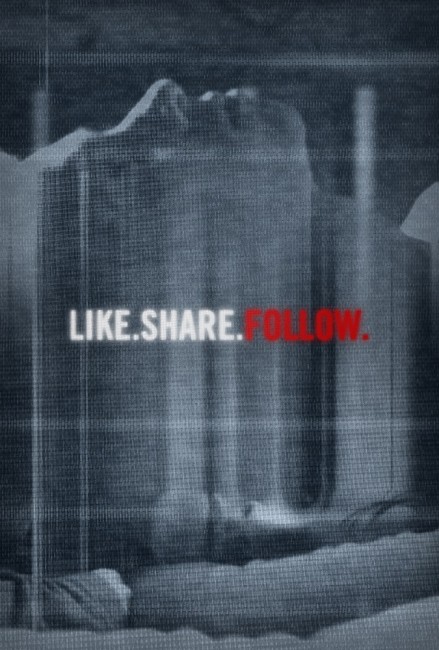 Garret Hoffman runs a successful YouTube channel and has two million followers. Picking up his mail from the post office, he strikes up a conversation with the clerk Shell and asks her out. The two spend the night together. However, in the morning, she reveals that she is one of his followers FanGirl22 who travelled there and took up the job so she could be with him. Garret is upset at the deception and wants nothing more to do with her. However, Shell continues to stalk him, breaking into his home, killing a girl Garret was interested in at a bar, burning down his father’s bookstore and other things.

Like Share Follow was the third directorial outing for Glen Gers who had previously made the little-seen The Accountant (2000) and the more high-profile Disfigured (2008). That was in between writing several high-profile theatrical releases with Fracture (2007), Mad Money (2008) and the horror film Inner Demons (2014). The film was picked up for release by Blumhouse.

Like Share Follow is essentially Fatal Attraction (1987) for the generation that invented the term ‘YouTube influencer’. Glenn Gers reinvents the plot of Fatal Attraction in amusing ways – rather than Michael Douglas spending the night with a deranged work colleague, Keiynan Lonsdale spends the night with Ema Horvath and then finds that she is really one of his fans. Wound in are all sorts of topical elements involving sockpuppet accounts, leaked sex tapes, livestreaming and an unnervingly on the ball scene where Ema Horvath uploads a pleading video and it is instantly mocked by a host of others. Gers even quotes one of the images from Fatal Attraction where Glenn Close sits flicking a light switch on and off whereas here it is Ema Horvath with a computer screen.

One of the things that works very well for the film is its casting. Keiynan Lonsdale, previously Wally West/Kid Flash on tv’s The Flash (2014- ), has a high-energy presence and a natural charisma on screen. You could easily believe him as a highly successful vlogger as he has such an amiable presence, the sort that can convince everybody he is their best friend. Opposite him, Ema Horvath has a sweetness and likeability that lets the two of them connect together rather well – one scene where she is pleading down the phone about all that she has done for him has an emotive conviction. (Indeed, you can’t help but think that Keiynan’s sleeping with her and then tossing her out the next morning just because she wasn’t completely honest about who she was is a bit of a dick move).

It all works together rather well. The two leads play with undeniable charisma, creating a modest and effective film. Glenn Gers produces a number of effective twists – like the jolt when Abraham Benrubi’s detective opens the door – before reaching a bleak ending that says some alarming things about the fans out there in internet land.