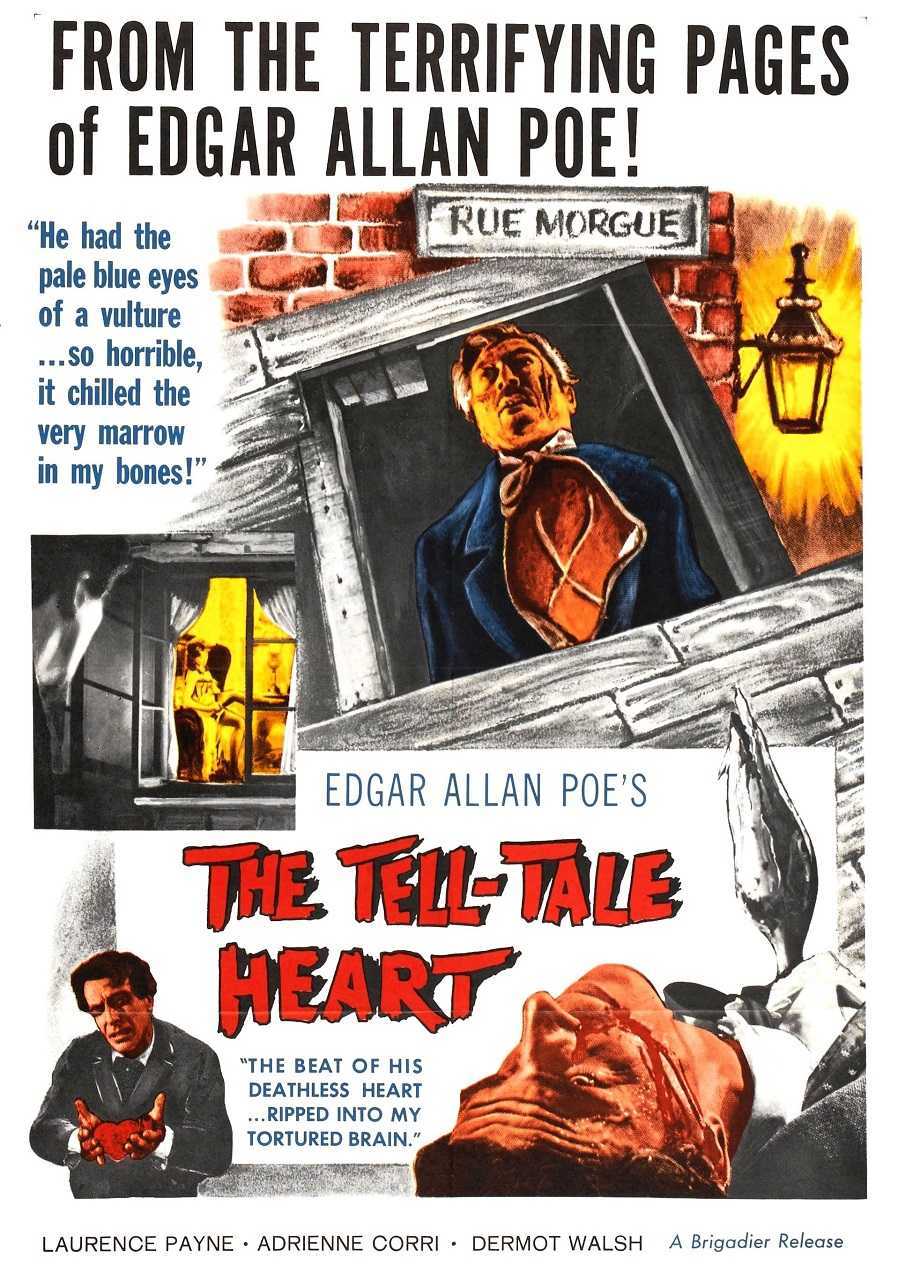 19th Century Paris. Librarian Edgar Marsh observes a new girl Betty Claire moved into the apartment across the street from him and peeps in on her undressing. Edgar is socially awkward around women but his friend Carl Loomis urges Edgar to strike up a conversation with Betty and ask her out. Edgar does so and she accepts. She rebuffs his attempts to kiss her but continues to go out with him. However, when Edgar introduces Carl to her, she develops an attraction to him. Edgar is shattered to look through her window and see Carl spend the night with her. Afterwards, Edgar calls Carl to him and kills him with a poker. In the days following, Betty tries to alert the police to Carl’s disappearance and becomes suspicious of Edgar. Edgar meanwhile is haunted by a guilty conscience and hears Carl’s heart beating from where he has buried the body under the floorboards.

The Tell-Tale Heart (1843) is a story by Edgar Allan Poe. It is a typically Poe-like work of paranoia and madness, concerning an unnamed narrator who murders an old man and then buries his body under the floorboards. (Poe never given any reason why the murder occurs). Afterwards, the narrator believes that they can hear the murdered man’s heart still loudly beating and is driven crazy by this to the extent that they confess to the crime. The Tell-Tale Heart has been filmed some 38 times, beginning in 1928, although most of these are of the short film variety, including one of the episodes of the animated Extraordinary Tales (2015) narrated by Bela Lugosi. The one notable feature-length version was Tell Tale (2009), which threw Poe entirely out for a story about a possessed heart transplant and organ harvesting scheme, and the later The Tell-Tale Heart (2016).

To place this version of The Tell-Tale Heart in context, it was a British horror film made two years after Hammer Films had exploded on the scene and changed the British film industry with The Curse of Frankenstein (1957) and Dracula/The Horror of Dracula (1958). It was released the same year as Roger Corman began his popular series of Edgar Allan Poe adaptations starring Vincent Price beginning with The House of Usher (1960). I am unable to ascertain whether The Tell-Tale Heart was influenced by Corman or not – The House of Usher was released in the US in July of 1960 but did not appear in the UK until December of that year around the same time as The Tell-Tale Heart was released.

Hammer and Corman made florid Gothic works, shot in colour and with lush sets and costuming. By contrast, The Tell-Tale Heart is cheaply shot in black-and-white. It appropriates the 19th Century period setting preferred by the Hammer/Corman films but only does the most perfunctory job of filling it out. The setting is supposedly 19th Century Paris, for instance – we even get a prominently focused street sign saying Rue Morgue – but all of the characters have very English rather than French names.

The Tell-Tale Heart was a production from The Danzigers, brothers Edward and Harry who were American born. They located to England after World War II and formed New Elstree Studios that operated between 1956 and 1962. Between 1949 and the early 1960s, The Danzigers produced over 70 films and a couple of tv series. All of these were very cheaply made. Most of their works are crime films but there was the odd one that strayed into genre material with Devil Girl from Mars (1954) and Satellite in the Sky (1956).

Though it is cheaply made, The Tell-Tale Heart is not uninteresting. In Edgar Allan Poe’s story, the unnamed narrator murders an old man only to be haunted by the beating of his heart. The film offers the oddity of Poe’s story having been rewritten as a work about a man who is awkward with women. To be fair to the filmmakers, Poe didn’t exactly give them much to spin a film out with (as Corman frequently found with his adaptations) – no more than an unnamed narrator, no reasons for the murder other than the dislike of the man’s eye. All that remains of Poe in the film is the aspect of the murderer being haunted by the dead person’s heart from underneath the floorboards. The one addition we get over Poe is a scene where Laurence Payne cuts the offending heart out of the body and tries to get rid of it.

The early sections of the films are all about Laurence Payne’s awkwardness in asking girls out. Some of these scenes raise a few eyebrows today. It is hard to believe that Laurence Payne’s awkwardness and over-eagerness would not be regarded as nerdy neediness by a woman today. Not to mention the fact that he forces a kiss on her unasked – and then she agrees to still go out with him again! Things are emphasised by what must have been a fairly risque suggestiveness for the day – he watching Adrienne Corri undressing to her underwear through her window from across the street, the scenes in the bar where we get closeups on the thighs of the women or suggestive shots of them putting on lipstick.

The film starts to get interesting when the jealousy plot emerges and Laurence Payne loses Adrienne Corri to his best friend Dermot Walsh right under his nose and oblivious to what is going on. I particularly liked a scene where Payne is dancing with Corri and with every circle her eyes remain glued to Walsh seated across the floor at the table. The film also goes for much of a brooding, almost film noir-esque psychological tension that Hammer and Corman never did. We even get bubble superimpositions to represent the killer’s state of mind. This is undercut by a mundane thriller plot where Adrienne Corri tries to alert police to Walsh’s disappearance. The end of the film opts for the corny All a Dream Ending.

Director Ernest Morris spent a mostly undistinguished career throughout the 1950s and 60s directing British quota quickies. His one other film of genre note was the SF film Masters of Venus (1965).

The Tell-Tale was the first genre work from Brian Clemens who had been churning out quota quickie thrillers for the better of a decade and shortly after became a major genre name. Brian Clemens’s other scripts are:– Curse of the Voodoo/Curse of Simba (1965), And Soon the Darkness (1970), See No Evil/Blind Terror (1971), Dr Jekyll and Sister Hyde (1971), the Ray Harryhausen fantasy The Golden Voyage of Sinbad (1973), the Disney ghost story The Watcher in the Woods (1980) and Highlander II: The Quickening (1991). Clemens also wrote and directed Hammer’s Captain Kronos – Vampire Hunter (1974). He has acted as script editor and producer on the tv series’ The Avengers (1962-9), The New Avengers (1976-8), The Professionals (1977-83) and Bugs (1995-8).