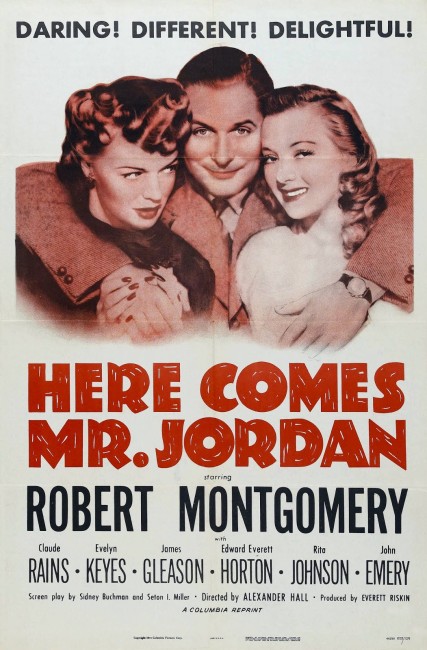 Boxer Joe Pendleton is rescued from an out-of-control plane by an overzealous angel that wishes to spare him the pain of the crash. Upon arriving in Heaven, Joe finds that he has been taken prematurely and was not meant to die for another forty years. The Heavenly Supervisor Mr Jordan sets about trying to find Joe a new body, eventually settling upon that of millionaire Oliver Farnsworth who has just been murdered by his wife and secretary. In his new body, Joe becomes entranced with Betty Logan, the daughter of a man that Farnsworth’s unscrupulous dealings is about to send to jail. Joe spends millions trying to clear the man. He then sets out to win the prize title he was up for in his old body. However, he has reckoned without his scheming wife.

Here Comes Mr Jordan is a film adaptation of an unproduced play Heaven Can Wait by Sidney Buchman who had also written the Frank Capra hit Mr Smith Goes to Washington (1939). Here Comes Mr Jordan has become a classic amid the genre of afterlife fantasies that were all the rage during the 1940s, at about the same time as World War II was happening.

Here Comes Mr Jordan is a pleasantly innocuous whimsy that tells an okay sentimental story. Any theological commitment – any mention of The Almighty or whether there is an alternate to Heaven ie. Hell – is neatly avoided and the hereafter is staged as a grey netherworld. The film won the 1941 Academy Award for Best Adapted Screenplay and Best Screen Story, although there do seem a number of holes – such as why Farnsworth’s body can be resurrected and Joe’s cannot. Not to mention the fact that Heaven seems to be run as a very inefficient bureaucracy.

The performances are occasionally overdone – Edward Everett Horton’s apologetic blustering, James Gleason’s batty dithering and most of all Robert Montgomery’s heart-of-gold brains-of-lead simple-mindedness. The film seem to lack the ability to escape the inherent staginess of the play – you can almost point to where the curtain would have fallen on each scene on stage. As a whole though, Here Comes Mr Jordan engages one likably enough and one eventually becomes enwrapped in its feelgood dramatics.

Here Comes Mr Jordan was later remade as Heaven Can Wait (1978), co-directed by and starring Warren Beatty as Joe who was now a quarterback, and as Down to Earth (2001) starring comedian Chris Rock where it became a comedy about a Black man being incarnated in a white man’s body, as well as a Bollywood film Jhuk Gaya Aasman (1968). Down to Earth (1947) was a semi-sequel that concerned itself with the Greek goddess Terpsichore coming down to Earth to aid a struggling Broadway playwright and featured the character of Mr Jordan, as well as Edward Everett Horton reprising his role as the heavenly messenger.