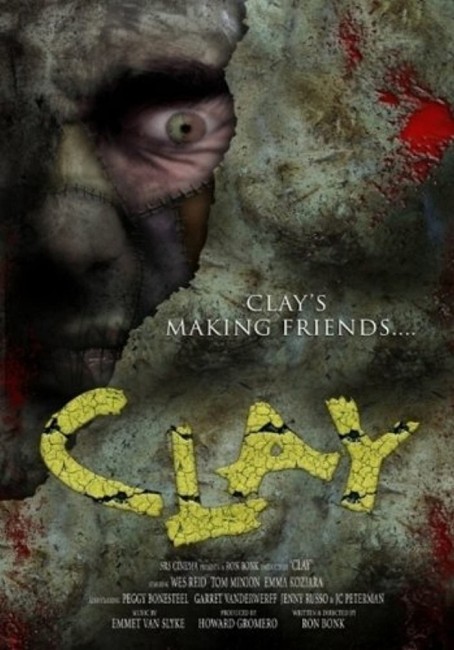 In Syracuse, Clay has been raised by his father Sam who treats him with contempt. Sam tells Clay how he made him from clay and breathed life into him. Clay goes out into the streets where he plays a game where he will stalk and then kill anyone who brushes into him as he walks. At the same time, Sam begins to form a friendship with the neglected pre-teen neighbour Jessica.

Ron Bonk is a New York-based filmmaker and distributor. Bonk has been making films since the 1990s, which include the likes of The Vicious Sweet (1997), Strawberry Estates (2001), Ms. Cannibal Holocaust (2012), Empire State of the Dead (2016), She Kills (2016) and House Shark (2017). Bonk also runs the SRS Cinema label, specialising in the production and distribution of low-budget horror and exploitation films, including titles such as Inbred Redneck Alien Abduction (2004), Satan’s Cannibal Holocaust (2007), Terror at Blood Fart Lake (2009), Night of Something Strange (2016) and Sharks of the Corn (2021), along with numerous others.

Clay was Bonk’s sixth film as a director and one where he was clearly still improving his craft. (That is not meant as a criticism as Clay is by no means an uninteresting film). While most indie films run to about 90 minutes or less, this has a lengthy runtime of 134 minutes (just short of 2¼ hours). Bonk’s editing is slow and the film well in need of tightening – you suspect a better editor could have easily trimmed the film of 30 minutes or more. The camerawork looks non-professional. Bonk even attempts to use split screen effects early in the show – while a novel addition, it is a gimmick that feels like it needed better deployment.

Wes Reid’s Clay is a textbook example of a Psycho or Serial Killer. We are introduced to his habit of randomly walking the streets and then targeting anybody who bumps into him. His first victim is a middle-aged woman where Bonk does the whole gratuitous shower scene thing and it is a surprise to see this happening with a middle-aged woman rather than the usual twentysomething model. The next set-up involves him targeting middle-aged Penny Bonesteel and dressing up in military uniform and glasses and pretending to be her dead son and being taken in.

This all comes in between scenes being harshly treated by father Thomas Minion who regards him as a mistake and tells him he was made of clay. We get scenes of Wes Reid trying to create his own lifelike figure of clay. Wes’s stalkings are also interspersed with scenes where his father Thomas Minion befriends young abandoned pre-teen neighbour girl Emma Koziara. She eventually decides she wants to marry him and later in the show he decides why not and in one of the film’s more disturbing scenes they share a kiss. There is nothing much else going on here. The film comes with a base interest but takes far too long in the telling.