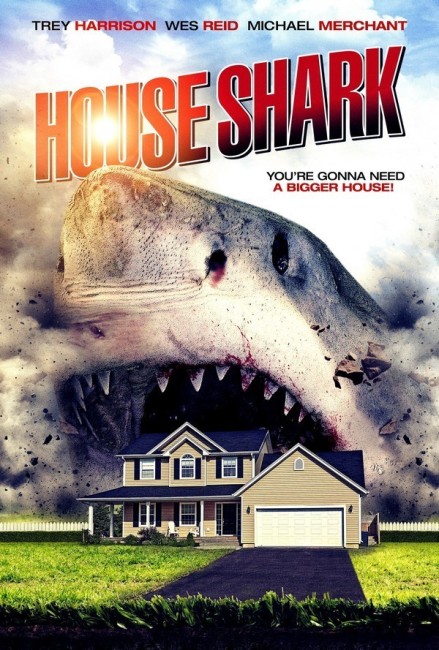 Former police officer Frank Roosevelt is traumatised after a shark emerges out of the toilet in his home and devours his babysitter Betsy. He and his son Theo are forced to move out of the house and live in a tent in the backyard. Because Frank can no longer keep up mortgage payments, there is pressure for him to sell the house. Joined by German house shark scientist Zachary Taylor and the drunken Abraham Lincoln, Frank ventures back into the house to kill the shark.

Ron Bonk is a New York-based filmmaker and distributor. Bonk has been making films since the 1990s, beginning with The Vicious Sweet (1997) and continuing on through Strawberry Estates (2001), Clay (2007), Ms. Cannibal Holocaust (2012), Empire State of the Dead (2016) and She Kills (2016). Bonk also runs the SRS Cinema label, specialising in the distribution of low-budget horror and exploitation films, including titles such as Inbred Redneck Alien Abduction (2004), Satan’s Cannibal Holocaust (2007) and Terror at Blood Fart Lake (2009), along with numerous others, including a subsequent venture into the Gonzo Killer Shark genre with Sharks of the Corn (2021), which was co-written by Bonk and directed by this film’s co-writer Tim Ritter.

I was very impressed with She Kills. It was one of the most accomplished B movies of its year (and several others), holding a knowing grasp of the genre’s tropes and using them with an outrageously over-the-top flourish that left your jaw on the floor. It was with She Kills in mind that I approached House Shark expecting more of the same – and surprisingly enough came away disappointed.

I found Ron Bonk’s take on the gonzo killer shark film appealingly ridiculous – rather than a shark prowling the seas, we have a shark that appears in suburban houses, emerging out of toilets or from under the sink and found prowling around living rooms. There are moments that House Shark hits the level of zanily surreal humour that the gonzo shark film is known for – a plot to lure the shark that involves Trey Harrison dressing up in a costume to pose as a lady shark, which when revealed is a shark wearing a frilly apron; or the scenes where the hunters try to avoid the shark by disguising themselves as items of furniture such as a bookcases and a couch.

On the other hand, in that the gonzo killer shark film is already parodying another genre – the one established by Jaws (1975) and imitators – a parody of a parody seems a very dubious area to enter into. And the reality is that House Shark comes out as not being a particularly funny film. The moments between anything that seems vaguely intended as a gag stretch on for minutes at a time.

Much of the show is dominated by two excruciatingly over-the-top performances – from Michael Merchant with fake German accent and Wes Reid who sports a very fake looking Shenandoah beard and exaggerated Southern accent as an Abraham Lincoln lookalike. The affectedly over-the-top performances might have been amusing as brief cameos but they come to dominate the show – and in a show that is allowed to run to over 100 minutes in length, it feels like a film in bad need of cutting. Not to mention the fact that Michael Merchant in cliched Tyrolean gear and particularly Wayne W. Johnson as an American Indian named Darth Squanto end up travelling into questionable areas of racial caricature. For some reason, most of the characters in the film are all named after US Presidents and their wives.