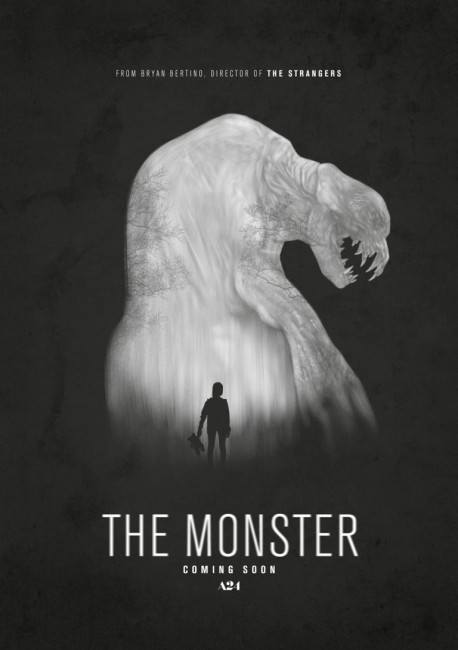 Young Lizzy and her mother Kathy have a troubled relationship that is marked by Kathy’s neglect. They set out on a road trip during which Kathy informs Lizzy that she will not be coming back home with her. On the road, they skid to avoid hitting a wolf and crash in the middle of nowhere. As Kathy lies wounded, they try to call for help. Lizzy becomes aware that there is a monster lurking in the nearby woods. A tow truck driver arrives to take the car away only to be attacked by the monster. Lizzy and Kathy shelter in the car, fearful of the monster coming for them next.

Bryan Bertino became a name to pay attention to after debuting with the eerie and stylish home invasion film The Strangers (2008). In its aftermath, Bertino announced a slew of horror titles but these seem caught up in development hell for the next few years, although he did produce The Blackcoat’s Daughter/February (2015), Stephanie (2017), Hurt (2018) and The Strangers: Prey at Night (2018).

Bertino’s Mockingbird (2014) eventually emerged as a negligible Found Footage film under Blumhouse. The Monster played a handful of festival and limited theatrical screenings where it attained some very good notices but not much buzz. Nevertheless, after several years of stalled productions, The Monster finally has Bryan Bertino delivering on the promise he showed with The Strangers and making his best film to date. Bertino subsequently went on to make The Dark and the Wicked (2020).

What strikes you about The Monster is not the horror elements, which do not kick in until some way into the film, but the starkness of the characters. We are first introduced to young Ella Ballentine cleaning up around the house, before waking her mother and telling her they he should be on their way. It is shocking seeing Zoe Kazan for the first time. Zoe has emerged as a sparkly, vivacious and talented performer in recent years. Seeing her here with shabby home hairdye, burned-out rock chick look and the suggestion of some past drug or alcohol addiction issues, the effect is a considerable jolt.

The relationship between mother and daughter is considerably different to anything we usually see on screen – one where the pre-adolescent is sharp and alert, has considerable cynicism and basically manages the show, ordering her mother around with a worldweariness. The flashback scene where we see Ella Ballentine being beaten makes for uncomfortable watching. This is balanced by incredibly tender images Bertino creates such as where Zoe Kazan is lying passed out on the bathroom floor after having vomited in the toilet and Ella Ballentine comes and curls up behind her.

It is however when The Monster starts becoming a monster movie that Bryan Bertino makes an audience sit up and pay attention. Bertino has taken his lesson from the way Ridley Scott kept the alien’s appearances in Alien (1979) only partially glimpsed. The monster here is something eerie and half-seen – a black shape unveiling in the shadows behind Ella Ballentine as she finds the wolf body in the woods; Zoe and Ella wondering why Aaron Douglas is not replying from under the car.

The character groundwork that has been laid in the earlier scenes adds a terrifying effectiveness to these sections. The scene where we realise that Zoe Kazan is going to sacrifice herself so that Ella Ballentine can get away has an enormous emotional rawness. Although what is even stronger than that is the scene that comes after where young Ella Ballentine is forced to fight against the monster all on her own.