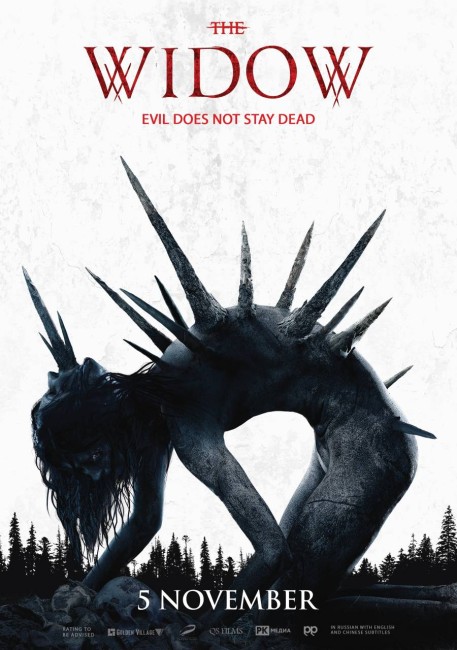 A search and rescue team are conducting exercises in the wilderness of the Volkhovsky District near St Petersburg as the same as they are being filmed by news reporter Christina Arrifeva. They then receive a call that a child has gone missing in the area. They divert off to conduct a rescue operation. Instead they find an old woman Zoya in a traumatised state and head back to safety with her. However, they lose their way in the woods by night and the van becomes stuck in mud and then crashes. Zoya explains to them that the woods are inhabited by the spirit of a widow who was accused by locals of murdering her husband and driven out of town, where her legs were broken and she stripped of her clothes and thrown into a pit to die. She will not let them leave and wreaks her vengeance on all she lures into the woods.

The Widow soon develops an incredibly haunted mood. Director Ivan Minin does a fantastic job in creating a Woods that seems incredibly desolate, far from anything that even resembles human habitation. The scenes with the van driving through the narrow track seen by drone camera and the group becoming lost in the pitch blackness starts to become incredibly eerie. Amid this, Ivan Minin gets in some ick moments – like where they pull an incredibly long chunk of hair out of Margarita Bychkova’s throat that just keeps on coming.

You feel like The Widow should be a Found Footage film. It seems shot that way with the action being followed by a camera crew who are in the midst of the happenings with the participants. The film occasionally remembers to get back to the footage being shot but is for the most part a standard drama. On the other hand, what becomes apparent is that The Widow is intended as a Russian equivalent of The Blair Witch Project (1999) – this has a very similar plot of a group lost in the woods that are haunted by a legendary witch.

The Blair Witch connection is made evident in the scene where Viktoria Potemina goes into the building in the woods and finds Konstantin Nesterko standing with his face to the wall. The scene goes in slightly different ways but the homage is overt. The ending of the film goes far deeper into the mythology of the witch than Blair Witch ever did and turns things on their head in interestingly unexpected ways.

The Widow was a directorial debut for Ivan Minin.