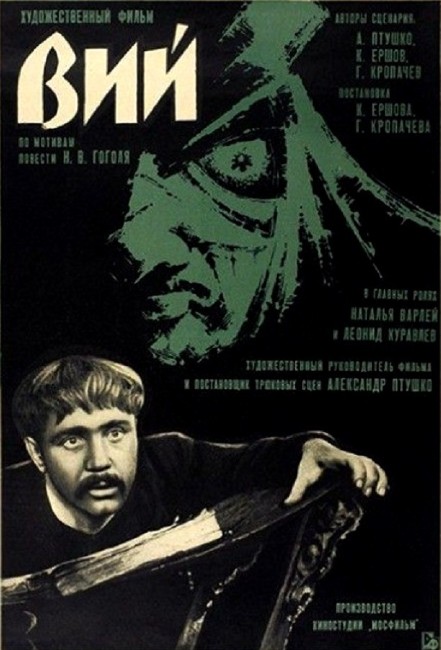 The philosopher Khoma Brutus is released on leave from his monastery and travels with two other monks. They become lost on the steppes and seek refuge at the farmhouse of an old woman. That night, the old woman comes to Khoma where he sleeps in the barn and reveals that she is a witch, making him ride with her on his shoulders as she takes off into the air. She falls to the ground and Khoma briefly sees a beautiful woman there. Back at the seminary, Khoma is told that he has been requested to go and say prayers for the daughter of a wealthy man near Kiev. Khoma does not want to go and keeps trying to run away but is forced to fulfil his duty. He arrives at the village to learn that the young woman has died. For three nights, he is locked in the church to say prayers while her body lies there. However, the body of the woman rises from its coffin each night to taunt and raise the forces of darkness against him.

Viy is adapted from The Viy (1835), a short story by Russian writer Nikolai Gogol who wrote a number of works of horror during his literary career. The Viy was published in the story collection Mirgorod (1835) in which Gogol writes several tales based on Russian folklore. The Viy gained a certain degree of fame when it became the basis of Mario Bava’s classic horror film Black Sunday (1960), albeit very liberally adapted. The story was also later adapted as the Yugoslav film A Holy Place (1990) and the big-budgeted Russian remake Viy (2014).

This is an adaptation of the Nikolai Gogol story that was made by Mosfilm, the state-backed film studio of the Soviet regime. It is perhaps worth remembering the context of the film’s making when it comes to considering Viy as a horror film. Horror would seem to be something that did not meet state approval under the Communist regime – I have been unable to locate any other horror works that came out during this period – and Viy appears to have been made more from the cultural perspective of filmmakers adapting a work by a classic Russian literary figure than one made within genre confines.

Viy is made with a good deal of faithfulness to the relatively slim original Nikolai Gogol short story (which hails in at only 14,000 words). Leonid Kuravlyov’s monk hero is very different to the character that we would have in a Western horror film. Kuravlyov looks rough, is unshaven and seems more of a peasant than someone who demonstrates the intellectual prowess of the philosopher he is said to be. Where a Western film would give him a story arc where he has to rediscover his flagging faith to win the day a la The Exorcist (1973), Kuravlyov by contrast spends most of the film trying to run away from his duty. (Which could quite possibly be due to the Communist state’s avowedly atheist stance and a desire not to portray the clergy as heroic – it is notedly one aspect of the character that has been added over the Gogol story).

The film opens with a surreally beautiful scene where the old witch (N. Kutuzov) appears to Leonid Kuravlyov in the barn, causing him to unnaturally bow before her, whereupon she climbs onto his back and rides him, whipping him with a broomstick as they move across the grass and then slowly take off and fly through the sky. The bulk of Viy takes place set around the three nights with Leonid Kuravlyov locked in the church.

On the first night, we begin with a series of ambiguous images as he enters the church – a horde of cats running, a mystery wind blowing out the candles he lights. This becomes increasingly more eerie as the girl rises from the coffin and he must draw a protective chalk circle around himself as she tries to push her way in, before the rising of dawn causes her to retreat to the coffin. While the scenes outside the church have been shot standard, the camera moves here become fluid and are constantly circling around Kuravlyov. The scenes with the protective circle also make remarkable contrast to the very similar ones that took place in Hammer’s The Devil Rides Out (1968) the following year and one wonders if the Hammer film ended up taking some influence from Viy.

Things become even more outlandish during the second night where the woman’s coffin takes off and starts flying in circles around the inside of the church. The standout moments of the film however take place during the third night. Here things become entirely fantastic – giant hands forcing their way through the walls and floor of the church, the appearance of walking skeletons, creatures with multiple eyes, skeletal hydra heads, werewolves and vampires from through the boards of the walls; the last being the monstrous Viy, which has to get the other creatures to pry open the slats that cover his eyes, and all come to crowd in around the protective circle. It is a wonderful vision of fantastique that the film manages to conjure here.

The film makes a virtue out of its 19th Century settings and in obtaining a (studio-bound) recreation of a Cossack village and peasant life there. You might compare this to Black Sunday and the Hammer films of this era and their depiction of various 19th century European locales. Here the filmmakers seem to be making a determination to give a depth to the culture that the film takes place amidst that goes far further than any other horror film of the period.