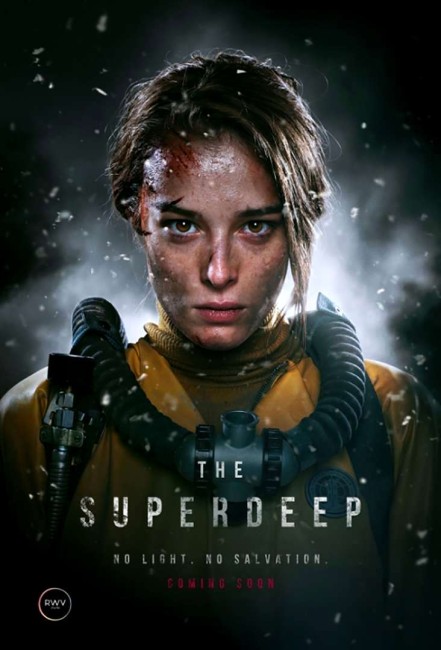 The Soviet Union, the 1980s. The epidemiologist Anna Feodorova is called in by the Russian military and flown to Mirmansk to the Kola Superdeep Borehole, the world’s deepest mineshaft. Something has gone wrong with the project. As they arrive, a scientist attempts to blow himself up with a grenade. Anna joins an exploratory group as they descend down into the borehole in an elevator only for another scientist Gregoriev to attempt to sabotage the descent and then flee into the tunnels. They encounter survivors who are infected with a mould that rapidly spreads and absorbs the human body. In trying to deal with this, Anna realises that the drilling project has awakened something that was buried in the depths.

I have said it before and will say it again – Russian fantastic cinema of the late 2010s/2020s is producing some of the most exciting genre content in the world at the moment. The Superdeep joins several other fine works that have emerged in the intersectional area between science-fiction and horror in the last couple of years along with the likes of The Blackout (2019) and Sputnik (2020). (See Russian Cinema).

By the time we arrive at the Kola Superdeep (which many may not realise was a real drilling project back during the days of the Soviet Union – part of the reason, it would seem that the series is back-dated to when Mikhail Gorbachev was Soviet General Secretary), we are getting strong vibes that make you think of The Thing (1982). In particular, the scene where the scientist detonates a grenade while going down in a hail of gunfire as the helicopter lands reminds considerably of the opening scenes with the Norwegians in The Thing. The subsequent scenes with armed soldiers venturing down into a labyrinthine complex that has been taken over by something else has an undeniable feel of Aliens (1986) to it.

Director Arseny Sukhin does an incredible job building up mood and expectation. After the opening scene, there is the descent down the elevator shaft – with the additional problem of the rogue scientist (Vadim Demchog) who has been giving warnings against going down abruptly pulling a lever and putting on a gas mask while all the others collapse and he flees down into the depths. Things become particularly intensive when Milena Radulovic finds a knotted tree-like growth on Darya Shagal’s back and then ventures into a laboratory to find the entire room has been taken over by a mould, which has a habit of sprouting pustules that puff toxins everywhere – and lying in the midst a still alive Darya Shagal reduced to half a face with an eye still moving.

The most phantasmagoric scenes come during the latter sections of the film as Milena Radulovic ventures in to confront the creature. In particular, there are the nightmare scenes where she must coat herself with a bucket of ice water as she attempts to crawl through a room overflowing with its writhing biological mass made up all the other bodies absorbed into it – a scene that more than favourably compares to the cinema scene in The Blob (1988).

One of the drawbacks of the film is that the only version I could find to watch was one that had been dubbed into English. I am kind of a stickler for trying to watch a film in a way that as closely approximates the way it was made as possible. I am unable to ascertain whether it was actually shot in English or Russian but one suspects it was originally in Russian and dubbed into English for its release on Shudder. While a fine job has been made to approximate lip movements, it is grating when you see the Soviet soldiers open their mouths and speak like Americans, especially when they start using the jargon associated with US soldiers, which I have strong doubts would have been used by the Red Army back in the 1980s.