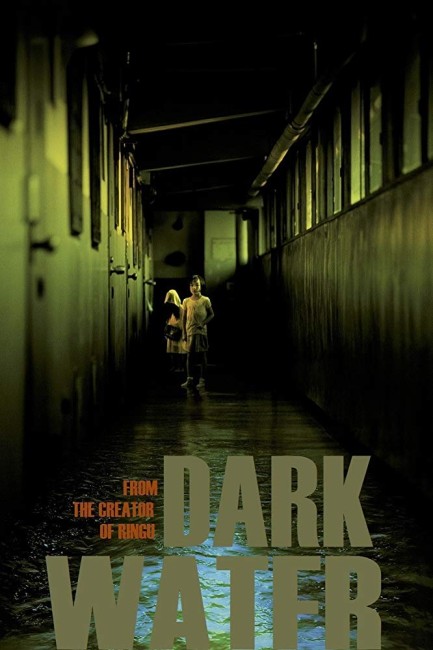 Yoshihiro Matsubara wins custody of her six year-old daughter Ikuko from her ex-husband after a bitter court battle. The two of them move into a rundown apartment and Yoshihiro places Ikuko into a nearby kindergarten as she takes up a job as a publisher’s reader. The apartment is plagued by water constantly leaking in through the roof. Yoshihiro comes to believe that the ever-present water and the ghostly appearances of a red child’s bag are a sign that the apartment is haunted by the ghost of Mitsuko Kawai, a young girl from the kindergarten who went missing two years ago.

Director Hideo Nakata made a strong appearance with the smash success of his third film Ring (1998), which revolutionised a new wave in Japanese and indeed Asian horror. Nakata had earlier made the horror film Don’t Look Up (1996) and went on to direct the obligatory Ring 2 (1999) and then a number of other films including the kidnap thriller Chaos (1999); the documentary Sadistic and Masochistic (2000) about the career of a Japanese porn director; Sleeping Bride (2000), a peculiar modernized take on Sleeping Beauty concerning a girl in a coma; and Last Scene (2002), a drama about a former Japanese movie star; and subsequent to this the further genre likes of Kaidan (2007), L: Change the World (2008), Incite Mill (2010), The Complex (2013), Monsterz (2014), Ghost Theatre (2015), Sadako (2019) and Stigmatized Properties (2020); as well as a couple of journeys to Hollywood to make the highly disappointing The Ring Two (2005) and the semi-okay Chatroom (2010).

None of these other films enjoyed the acclaim that Ring did and people waited for Nakata’s full-blooded return to the horror genre. This came with Dark Water, which has been Hideo Nakata’s biggest and most acclaimed success since Ring. Like Ring, Dark Water also underwent a Hollywood remake Dark Water (2005) with Jennifer Connelly, which is surely the measure of success in Japanese horror nowadays.

I must admit that for a good part of the running time of Dark Water, I failed to engage with the film. The plot seems ordinary – woman moves into apartment, apartment appears to be haunted by the ghost of a girl. Hideo Nakata seems to be too obviously attempting to recreate another Ring – yet another sinister girl with hair covering her eyes (something that became a cliché image in Japanese horror ever since Ring) wanting her death avenged; the same type of twist jump at the end; while it doesn’t take much to see that here Nakata has only substituted Ring‘s haunted video broadcast for a flood of water.

I must also confess that as a director Hideo Nakata has left me divided – Ring seemed crude at times, although by the time of Ring 2, he had polished his skill and created some genuinely unearthly shocks, but then appeared to have lost all of these by the time of The Ring Two and L: Change the World. Here Nakata creates some spooky images with the ever-present water creeping up, the red bag constantly reappearing, the black mark inching across the ceiling. There is the ever-so-spooky moment where a hand reaches up to take Hitomi Kuroki’s in the elevator and how, after her daughter runs on ahead, she realises that she has been holding someone else’s hand.

During this time though, there is never any scene that genuinely puts one on edge or propels them out of their seat. Certainly, what the early scenes do most effectively is to create bleak sympathy for single mother Hitomi Kuroki and her determination to make it on her own and raise her daughter, while fighting legal battles, trying to get a job and living in a very rundown apartment. Hitomi Kuroki gives an intelligent and effectively fearful and fraught performance in the role.

Almost when I was ready to consign Dark Water to being no more than an ordinary horror film, Hideo Nakata comes up with a completely left field ending that leaves one startled. The scenes with the mother venturing up onto the roof to look into the water tower while back in the apartment the ghost child appears from the bath to attack the daughter all have a fine atmospheric tension. However, it is the genuine surprise that comes when the mother heads down the elevator with the daughter’s body that entirely jolts the audience – to say more would be to ruin the surprise. Needless to say, it holds a considerable jolt akin to the appearance of Sadaka out of the tv set at the climax of Ring. There is also a beautifully haunting epilogue set fifteen years later as the now teenage daughter returns to the house. It is these scenes that make the film.

Dark Water should not be confused with Mariano Baiano’s Russian-shot, Catholic horror film Dark Waters (1993), which is entirely unrelated to this excepting in similarity of title.