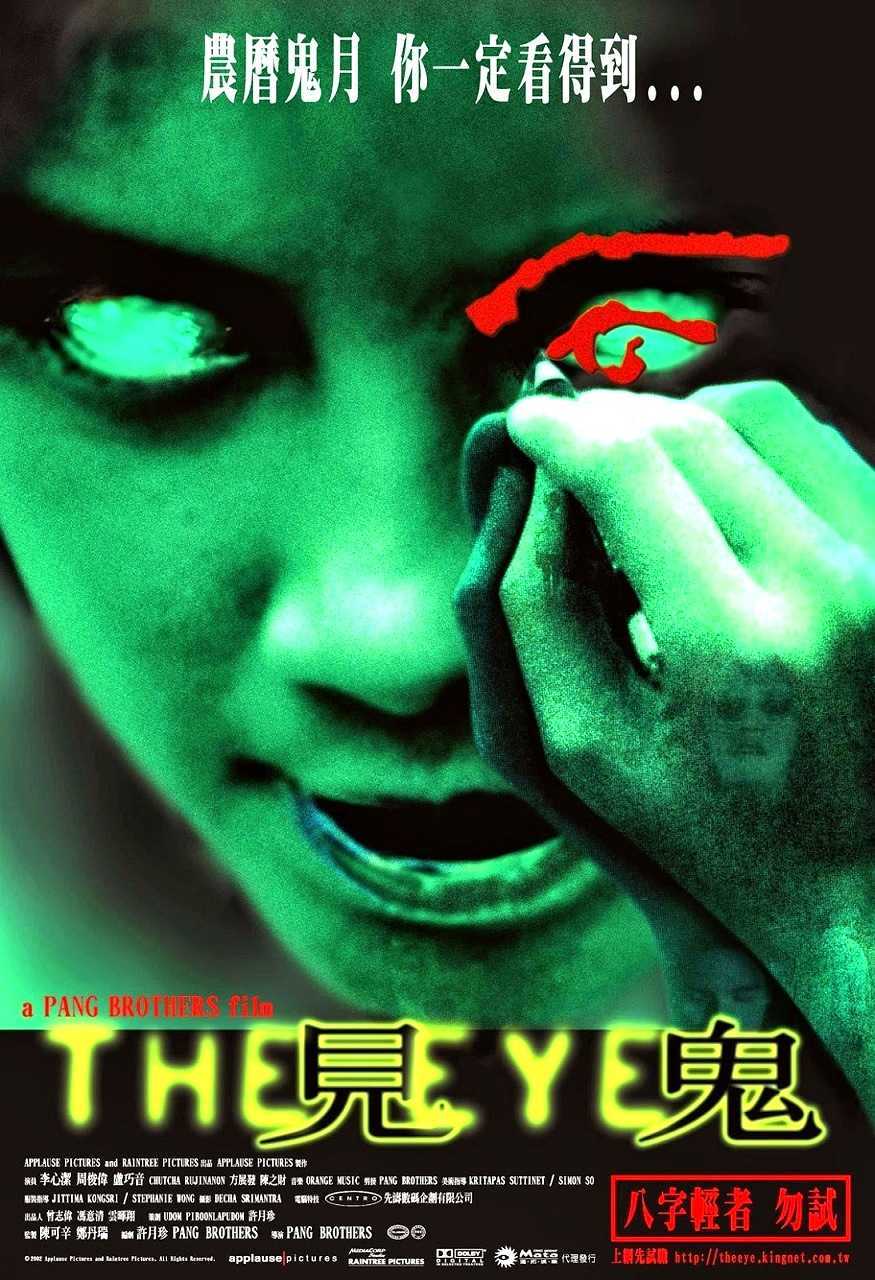 Wong Kar Mun, a Hong Kong woman who has been blind since the age of two, receives a corneal transplant that now allows her to see. As she adjusts to being able to interpret the world visually, she also notices figures that no others can see. As these figures become more sinister and threatening, Wong Kar Mun realizes that she is now able to see the dead. The inability to stop seeing these figures drives her to the point of near insanity. In trying to help her, her therapist takes her on a journey to Bangkok to find the donor of the corneas, a woman who was psychically gifted but ended up being driven to suicide.

The Eye is a Hong Kong/Thai made horror film that was a considerable success at various international film festivals. It was another of the films to ride on the huge success of the so-called Asian Horror Invasion in recent years – Ring (1998), Dark Water (2002), Ju-On: The Grudge (2003) etc. It also underwent an inevitable English-language remake, which is a mark of success among these other films.

The Eye was a collaborative effort from the Thai twin brothers, Oxide and Danny Pang. Oxide Pang had previously directed the fantasy film Who is Running? (1997) about a man who can predict tomorrow’s newspaper headlines, as well as an episode of the horror anthology Bangkok Haunted (2001). Prior to The Eye, the Pang Brothers had collaborated together on the gangster film Bangkok Dangerous (1999). Since The Eye, the Pangs went on to make the non-genre adaptation of Alex Garland’s novel The Tessarect (2003), the fantasy film Re-Cycle (2006), the Hong Kong Wu Xia film Storm Warriors (2009), The Child’s Eye (2010) and the non-genre fire rescue drama Out of Inferno (2013). They were imported to the US to make the English-language ghost story The Messengers (2007) and the English-language remake of Bangkok Dangerous (2008). Oxide on his own has also directed Ab-Normal Beauty (2004), the ghost story Diary (2006), the quasi-supernatural detective story The Detective (2007) and Sleepwalker (2011), as well as wrote/produced The Remaker (2005), while Danny solo directed Forest of Death (2007), In Love with the Dead (2007), Fairy Tale Killer (2012) and The Strange House (2015), and solo produced Scare 2 Die (2008). The Pang Brothers also wrote the screenplay for Omen (2003), a multi-stranded story about three friends who receive ominous premonitions.

The Eye could almost have been construed as a literalisation of the “I see dead people” line from The Sixth Sense (1999). Indeed, The Eye is almost a supernatural version of the thriller Blink (1994), which had Madeleine Stowe as a blind women who suddenly gets a transplant that allows her to see, only to start experiencing flashes that may or may not be evidence of a serial killer. That and a handful of thrillers with a science-fiction hook like BrainWaves (1983), Sensation (1994) and Unforgettable (1996) that are centred around the idea of someone receiving the transplanted memories of a dead person and then having to solve their murder.

The Pang Brothers create a film that holds some intensely spooky moments:– the appearance of the kid in the hallway asking about his report card, who is only seen from behind or bent over and then suddenly turns and starts devouring a ceremonial candle, saying “I’m hungry”, while Lee Sin-Je’s grandmother looking out the peephole of the door cannot see anything there; the surreal vision of Lee Sin-Je’s room blurring in and out of another room like a pendulum as the light swings back and forward, the pattern on the floor changing and photo vanishing every time it does; the woman at the calligraphy class who says “What are you doing in my chair?” and then leaps across the desk at Lee; the phantom woman and her son that Lee meet outside a restaurant, who prove to only exist from waist-height upwards and stand outside the window with a long purple tongue drooling while Lee eats; the boy who runs through Lee and across the street before she turns and discovers his body lying at the scene of a car accident.

The two most jolting scenes in the film are [SPOILERS ALERT] one where Lee Sin-Je enters a lift that contains an old man with his back to her and as she stands there, he slowly circles around the outside wall before turning to her, revealing half of his head is missing, and then starts inching towards her while his feet float about an inch above the ground. This is one of the spookiest moments that one can recall seeing in a film in recent years. The other considerable shock moment is the one where Lee Sin-Je fails to recognise her own face when shown a photo and joltingly comes to the realisation that the face that she sees in the mirror is not her own.

The first two-thirds of The Eye are filled with these genuinely spooky and unnerving sequences. Unfortunately in the latter third – about the point that the Pang Brothers take the film to Thailand – the plot falls into more routine directions as the girl with the transplanted memories tries to solve her corneal donor’s death. The film mounts to a routine disaster climax where, if nothing else, the Pang Brothers demonstrate an assured production flourish when it comes to big budget special effects sequences.

The Pang Brothers made two sequels The Eye 2 (2004) and The Eye 10 (2005). The film was later mounted as a disappointing, if very faithful, Hollywood remake The Eye (2008) starring Jessica Alba.

(Nominee for Best Director (The Pang Brothers) at this site’s Best of 2002 Awards).