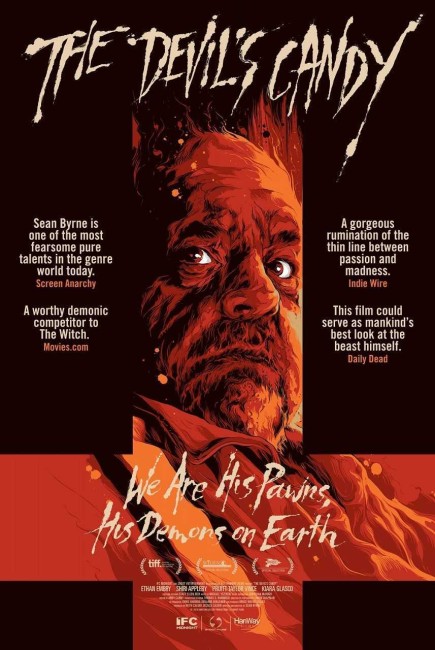 Artist Jesse Hellman and his wife Astrid make the decision to buy a house in the Texas countryside and move in along with their teenage daughter Zooey. They then meet the mentally disturbed Ray Smilie, the son of the previous owners who died in unclear circumstances. Ray leaves Zooey a rare guitar but then breaks in and attempts to molest her. Jesse becomes brooding and obsessive, constantly working on a painting that predicts that Ray will kill others, including Zooey.

The Devil’s Candy was the second film for Australian director Sean Byrne. I was impressed with Byrne on the basis of his first film, the splendidly twisted The Loved Ones (2009). The Devil’s Candy received a high-profile release, premiering at the Toronto International Film festival and then playing a host of other festivals around the world.

The Devil’s Candy gives all suggestion of being another heavy metal horror film. There have been a number of films that make a play on the occult imagery frequently associated with heavy metal in the likes of Trick or Treat (1986), The Gate (1987), Rock’n’Roll Nightmare (1987), Black Roses (1988) and the same year’s Deathgasm (2015). The expectation as The Devil’s Candy starts with an impressively tattooed Ethan Embry head-banging, a clearly disturbed Pruitt Taylor Vince getting in trouble wherever he goes for playing his electric guitar too loud, not to mention assorted heavy metal on the soundtrack, is of another horror film in the same vein. However, this doesn’t turn out to quite be the case.

The Devil’s Candy seems to come with a lot of associations – that the house Ethan Embry and family move into is infected by a malevolent presence from the previous owners who died in mysterious circumstances, that this is forcing Ethan Embry to become brooding and possessed as he paints works that seem to predict the killings that Pruitt Taylor Vince will do.

Elsewhere, the film is constantly seeing everything in terms of heavy-handed Biblical imagery – a Belial art gallery and the gallery’s owner (Tony Amendola) seeming to offer Ethan Embry a devil’s deal for success at the cost of his family.

The great disappointment of The Devil’s Candy is that it is all brooding and the suggestion of something about to happen and the delivery of not much at all. Ultimately, all of the dangling threads about the house’s past, the occult, the associations with heavy metal music, Ethan Embry’s brooding and obsession with his painting, the suggestion of diabolical deals is just window dressing.

In reality, The Devil’s Candy is a very ordinary psycho film about a disturbed madman who fixates on a family and their teenage daughter. The occult, the painting, the devil’s deal theme, even the heavy metal theme, is of no significance to how any of the plot transpires. Certainly, in this regard, Pruitt Taylor Vince is an actor who has the crazy-eyed psycho thing down so creepily pat that he adds a genuine chill to the film.