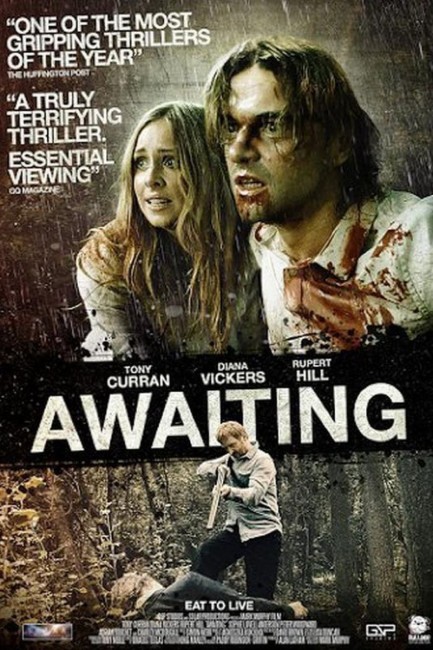 Morris, a tow truck driver, brings Jake, a lawyer he rescued from a crashed vehicle, back to his home in the Yorkshire countryside. Jake meets Morris’s daughter Lauren who has never travelled far beyond the immediate environs and she takes a liking to him. Jake has urgent business and is determined to be on his way but Morris insists he stay the night and keeps finding excuses to prevent him from leaving. Jake attempts to make an escape only for Morris to recapture and chain him up. As Jake realises, Morris has been trapping passing motorists, killing them and salvaging their vehicles and belongings.

Awaiting was the third film from British director Mark Murphy. Murphy had previously made the non-genre Casanova’s Last Stand (2007), the horror film The Crypt (2014). He subsequently went on to make the non-genre The Comedian’s Guide to Survival (2016) abd The Revenger: An Unromantic Comedy (2019).

If Awaiting was an American film, Tony Curran would be a backwoods hick and the film would fall into the genre of films that we call Backwoods Brutality, which began with the likes of Deliverance (1972), The Last House on the Left (1972) and The Texas Chain Saw Massacre (1974). The Backwoods Brutality genre commonly centres around city dwellers who run afoul of backwoods hillbillies who lead degenerate existences where they have become inbred, cannibalistic and psychopathically relish the prospect of torturing and killing outsiders.

By contrast here though, the initial scenes in which they are introduced play Tony Curran and Diana Vickers with more of a regular folksy vibe than degenerate and deranged and it is only as Rupert Hill realises that he is imprisoned that the true nature of what is going on becomes apparent. Tony Curran is an actor who has made a career out of thuggish and psychopathic roles and so has this sort of part down with ease by now. He gets some particularly nasty lines “Sweet girl. Tender, succulent. Tell me how did she taste, Jake?” On the other, an unusual degree of sympathy is given over to Diana Vickers as Tony Curran’s unworldwise daughter, creating far more empathy for the other side for a film mining the Backwoods Brutality genre.

Director Mark Murphy builds the film effectively, it is well scripted in the constant juggling of elements, and the performances are solid (even if I found it a stretch of the imagination to accept Rupert Hill as a lawyer). Where the film fell down for me was the lack of believability in the concluding scenes. [PLOT SPOILERS]. The big, climactic scene has Rupert Hill making an escape by borrowing a trick from Saw (2004) and cutting his leg off to get free from his chains. Only, unlike Saw, he doesn’t make the cut at the ankle but saws the entire leg off from above the knee. In the subsequent scenes, we see him hobbling through the woods with Diana Vickers help in an effort to get free. While the severing has a horrid watchability, what does the credibility of the scene in is that he makes his escape attempt without ever bandaging the leg or attempting to stem the blood flow. Medical science tells us that with the massive amount of blood loss that would come from a severed leg, he would have died in about five minutes flat rather than even had the strength to hobble to safety while still bleeding.