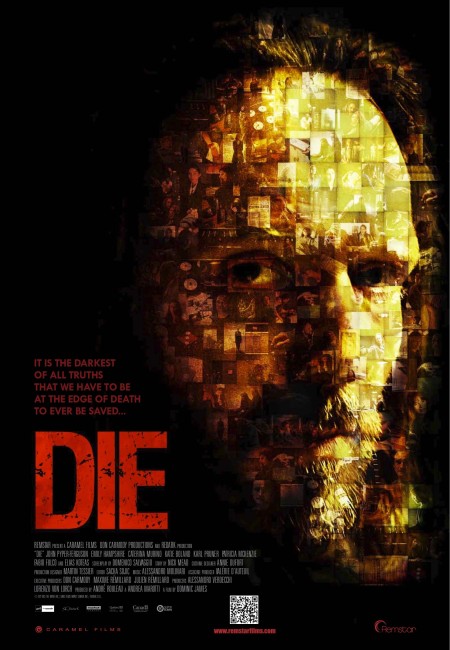 Six people come around to find they are locked in a series of cells in a basement. They are introduced to a mystery man who forces them at gunpoint to engage in a deadly game where they must roll a dice. Each dice roll deals out a fate to another member of the group – such as being shot, drowned, given a drug dose or having their blood drained. Some of the fates are fatal, others can be harmlessly survived, with the severity of each being decided by the randomness of the die roll. As the group soon discover, they are all people who attempted to commit suicide and are now being forced to enact the means that they chose to kill themselves on another member of the group. At the same time, Detective Sofia Valenti conducts an investigation into the disappearance of her partner Mark who has become one of the people in the group. She uncovers the activities of wealthy but mentally ill heir John Odessa who has written a book entitled ‘The Will of the Die’ and created a cult of fanatical followers whose lives have been transformed after surviving his games.

This Italian-Canadian production has clearly set out with the ambition of imitating Saw (2004). Like Saw, it has several strangers imprisoned in a basement where they face a series of traps that will kill them by using the particular guilts and shames of their lives back against them. Behind the games is an enigmatic stranger of genius-level fiendishness and vast apparent resource. In both films, the A-plot about the people locked up in the cellar is interspersed with scenes of a detective investigating the person behind the killings. Both films also have a minimalist three-letter title that has a double-meaning that can serve either as an implement of central importance in the film or as a deadly verb.

On the other hand, Die resembles more one of the Saw sequels than Saw itself. What it lacks is the torturous corkscrew fiendishness of Saw‘s plot and is construed more like the Saw sequels were – as the provision of a series of protracted death scenes every few minutes. Of course, the major difference is that the Saw sequels dragged these out into an increasingly nastier series of sadistic set-pieces. Die, on the other hand, has decided that it is not going to compete with the Saw sequels in terms of gut-churning Torture Porn sadism and allows these to progress with a relative degree of tameness such that any of the deaths could easily screen uncut on broadcast television.

Die is an oddly unconvincing film. One gets the impression that the creative team were given orders to create another Saw and went away and did their best but the elements never came together with the essential spark. Novice director Dominic James delivers the first killing where Elias Koteas must place a gun up against the head of Fabio Fulci and play Russian Roulette passably but the rest of the set-pieces lack any distinguishing tension or frisson. John Pyper-Ferguson does a fair job trying to imitate Tobin Bell but his character never seems to move beyond an enigmatic smile.

The script lacks any twists or unexpected revelations to spike interest. Moreover, the end explanation of what is going on – about John Pyper-Ferguson having created a cult comprised of people who have had their lives changed after undergoing his games rings as singularly unconvincing in terms of psychology.

Dominic James subsequently went on to make Blind Spot (2011) about tourists hunted by a killer and Wait Till Helen Comes (2016) about a girl’s ghostly companion.