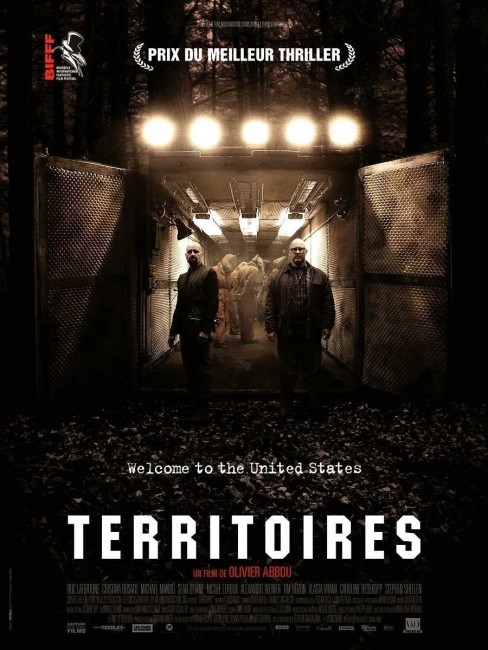 A group of friends – Jalil Adel Khalid, an American of Middle Eastern descent, his girlfriend, lawyer Leslie Goldberg, her mute brother Tom, and Michelle Harris and her boyfriend Gabriel Delgado – are driving back to Portland from a trip across the Canadian border. As they pass down a backroads route, they are stopped by two US border guards, Samuel Torrence and Walter Sotos. Torrence proves harsh and authoritarian, pulling a gun on them, treating Jalil as a terrorist suspect because of his Arabic ethnicity and stripping Leslie for a cavity search. When marijuana is found in Tom’s bag, they are placed in orange jumpsuits then hooded and locked in cages in the forest. There begins a nightmare ordeal where they are subjected to an inhumane level of torture and beating.

Territories was a fascinating Canadian-French horror film that was shot (originally in French language) in the Montreal region. It was a feature-length debut for French director Olivier Abbou.

The film kicks in from the opening few minutes. With the aid of a fantastically cold performance from Roc LaFortune who dominates the entire show, Olivier Abbou nails perfectly the sense of US border patrol guards who blur the line between authority and systematically-condoned tyranny. It is a scene that goes in an instant from a casual routine questioning to a brutal Kafka-esque nightmare as the slightest ambiguity or infringement is seized upon, where LaFortune leaps on the fact that Michael Mando is of Arabic ethnicity (despite having lived in the US his entire life) and begins to blatantly ignore anything approaching civil rights, including being prepared to gut the group’s dog as a suspected drug carrier, before he drags Nicole Leroux away and handcuffs her to a tree to conduct a strip search and all of them are then ordered to strip, are placed in orange jumpsuits where they are hooded and dragged away to be locked in cages in the woods.

This is a Backwoods Brutality film – a la The Last House on the Left (1972), The Texas Chain Saw Massacre (1974) et al – that has been rewritten post-9/11, which gives it some fascinating resonances. Territories rapidly becomes the first film to dig into the dark side of the fortress state that the US has become post-9/11 with suspensions of various civil liberties, the institution of Homeland Security and its draconian surveillance powers, the creation of Guantanamo Bay and the euphemism of ‘enemy combatants’, the treatment of all passers-by as possible terrorist suspects over the slightest infraction. The film seems to embody a great deal of the resentment of the high-handed and constantly suspicious treatment that Canadians and other international persons are regarded with by their cousins across the border these days – you suspect that someone conceived the film out of a sense of personal loathing at the way they were handled and that the various production companies signed on with undeniable pleasure at extending the middle finger to the Americans.

One of the arguments that has been made is that Guantanamo and Abu-Ghraib legitimised the Torture Porn fad (a theory I don’t particularly agree with). Territories however does dig into the specific connection where the backwoods tortures are expressly made to echo Guantanamo – the prisoners being herded in orange jumpsuits and hoods, being kept awake in cages and deprived of sleep, locked up naked in front of stroboscopic lamps and with loud industrial noise being blasted through speakers. In case anybody misses the connections, there are times the film stresses them in loud capital letters by cutting away to tv clips of President Obama saying he is closing Guantanamo and its condemnation by Amnesty International and showing Roc LaFortune looking on in disgust.

Territories works brutally and effectively. It works just as well as a horror film well as it does a political statement. (The same year also saw the very similar US-made Undocumented (2010) about the torture of Mexican illegal immigrants). The latter scenes are extremely good at getting inside a sense of the victims’ progressive intimidation and dehumanisation and showing the cold inhumane persistence of their interrogators. It is, you imagine, exactly what goes on inside the Guantanamo cells day after day. The torture consists more of the progressive dehumanisation of the detainees than it is out and out Torture Porn, although there is a particularly nasty scene where Michael Mando must extract a tooth from Christine Rosato’s jaw with a pair of pliers.

The film also reaches a bleak ending with the group’s hope of being rescued being shot out from under them and the last scene being the calm understatement of Sean Devine simply cleaning out the empty container. The film took a few hits for such an ambiguous ending but this works perfectly – Territories is a work of psychological dehumanisation, not one about highlighting the brutal dismemberment of the token cast with a dubious voyeurism.

Olivier Abbou later returned to the horror genre with Furie (2019).